The United Kingdom may be a small country, however; it is unique in many ways. There is great history behind this place. The economy is great, also there are many amazing sites for you to visit. Their culture is very distinctive. The United Kingdom has well managed schools. But just let me warn you now before we go on or better yet before you travel to this place, you must have all of your shots including a rabies shot just in case you get bit by a bat.

Don't use plagiarized sources. Get your custom essay on
“ Reason to Visit United Kingdom ”
Get custom paper
NEW! smart matching with writer

Every country has a story to be told. Here is how the United Kingdom started. During the Ice Age is when the first modern humans arrived (Ducksters). In the 1900’s the United Kingdom started to lose its world power. It continued losing control over colonies and became very weak by World War I. Ran by Winston Churchill, the UK played a major role on taking down and defeating Hitler in World War II.

The economy of the United Kingdom is highly developed. It is the fifth-largest national economy. The United Kingdom has things imported such as manufactured goods, machinery, fuel and foodstuffs. Since they have certain things imported they also have things that are sent out or exported such as manufactured goods, fuels, chemicals, food, beverages, and tobacco. They also have quite a few industries which are finance and banking, information technology, construction, oil and gas, manufacturing, wholesale and retail, transportation and logistics, and education. There crops are also a main part of their economy.

Their main crops are vegetables, potatoes, rapeseed, and fruit.

The United Kingdom has many interesting and unique traditions such as Bonfire Night, Maypole Dancing, Cheese Rolling, and Pancake Day. Bonfire Night is celebrated on November 5th there are fireworks and bonfires all over Britain, there are models of Guy Fawkes which are made out of clothes and are filled with newspaper and set on fire. This is all in representation of Guy Fawkes’ plan of hurting the king backfiring and the king being safe (Matthews). Maypole Dancing is a ceremonial folk dance performed around a tall pole garlanded with greenery or flowers and often hung with ribbons that are woven into complex patterns by dancers (Britannica). The cheese rolling tradition celebrated on May 28th is where from a top of a hill a 7 pound cheese wheel is sent down with people running after them, the first person to catch their cheese and roll it over the finish line wins (Langfitt). There is a tradition here in United Kingdom celebrated on March 5th that is called the pancake day race. The pancake day race is where people dress up in chefs hats and aprons, and run a 10 lap relay along The Garden of Thames flipping a pancake (Langfitt). For Christmas they do the same thing as we do they spend it with loved ones and watch others open their presents. For New Years they believe that the first person to set foot in their home on New Year’s Day will be the bringer of good luck for the coming year, they call this First-Foot. They also have fire festivals where they have a parade that is a cleansing ritual, the fireballs that they swing above their heads are said that they burn away bad spirits from the previous year (Stagecoachbus).

The topography of the United Kingdom is mostly rugged hills and low mountains, level to rolling plains in east and southeast. The whole country has breathtaking views. The United Kingdom has many waterfalls and beaches. Even the simple things like sunsets, sunrises, bridges, buildings, and the oceans are just amazing. For the winter solstice people gather at stonehenge to watch the sunrise.

The people from the United Kingdom speak English, British Sign Language, Scottish, and Irish. They have a few religions which are Christian, Hinduism, and Judaism. They have a wide spread of ethnic groups such as White British, Irish Travellers, Black British, British Asian, British Pakistanis, British Indian, British Jews, and English American.

In the United Kingdom if your birthday is during the summer you can graduate at 16. But if you do graduate at 16 you have to go to a university or work as an intern until you’re 18. Depending on the school and location universities charge up to 3,070 pound sterling per year. To even be able to study at a university in the UK you have to show competency in the English language.

These are just some of the many reasons you should visit the United Kingdom. There is so many different traditions, and cultures. They have such a beautiful landscape, and many cool sites for you to visit. But make sure that you have all of your shots, and a rabies shot. 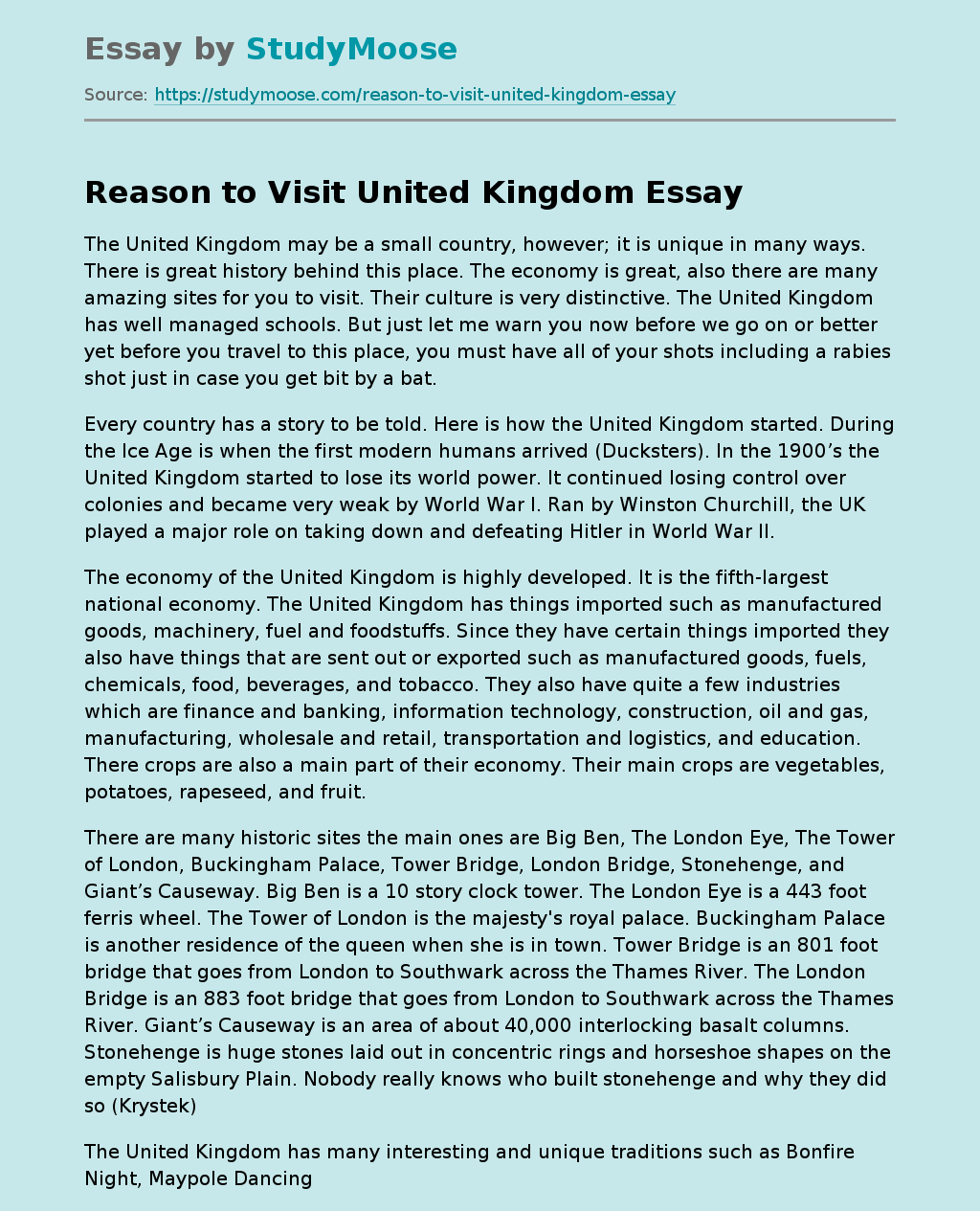