The Kingdom Of Matthias

The Kingdom of Matthias was one of the biggest and dramatic scandals of the nineteenth century. This narrative follows the lives of Elijah Pierson and Robert Matthews it becomes obvious there is a whole lot more happening than just the scandalous attractions that take place. Many social roles, economic changes and culture of the Market Revolution and The Second Great Awakening are shown. Race, class, and gender were discussed in this narrative the most in relation to the Market Revolution. American life during the early nineteenth century in the New York area was controlled by Matthias’ attitude towards gender; he displays how he felt about women being granted too much power in the 1830’s and how he handled it in brutal ways.

The Market Revolution and The Second Great Awakening were starting in the nineteenth century, and this started causing major changes including the roles and outlook on gender. The role of the male was very important. Being a male required no selfishness at all, they had their specific jobs that they were committed to and also had an important role with God and their families.

The new changes for the women were great, they received much more freedom than they had before this revolution.

Yet men were still getting paid more than women and some of the working conditions were dangerous, women were now earning wages for their work. They were additionally receiving wages for household duties that they had already been doing much prior to this revolution. The gender roles in the American society had been altered grandly.

In the story of The Kingdom of Matthias, Robert Matthews started a religious cult in New York during the 1830’s. Matthews came to believe that he was indeed not Robert Matthews; he was Matthias, Prophet of the God of the Jews. It was clear that Matthews had reached an extreme peak of insanity, but this did not stop him from having control. His wife Margaret was in great distress from the person her husband had turned into. He was extremely controlling and told her “She had no God, that the husband was the savior of the wife, that as man was not whole without woman” (Johnson and Wilentz 80). She would tell him to leave because he was bringing in no profit since he had stopped working. The situation got so bad that she had to beg her friends for food. The women of this time had changed into urbanized women.

Matthias was not happy with any of this change in the roles of women, and he was not going to support it. Matthias was going to take all measures needed to stop these changes. It became a very real and frightening sight when he grew a long groomed beard and began to look like Jesus Christ. Matthias had said that he knew he was human but stated “That from time to time God had sent his messenger on earth to enlighten mankind, from Moses to Jesus Christ, and from him to Matthias himself” (Johnson and Wilentz 89). His goal was to stop women from being able to prophesy; in addition women could not even be taught. He threatened anyone that would attempt to instruct women. “The Spirit of Truth, Matthias explained, was the spirit of male government” (Johnson and Wilentz 95). He said that women should only have one source of knowledge given to them by their husbands; this was only to be knowledge on how to obey their husbands.

There was once a situation in which a young female came to Matthias to tell him that Jesus had sent her. She was immediately beaten and Matthias told her that God does not talk to females. Considering this was taking place during the Market Revolution, there was now access too much more material goods. However, in the Kingdom of Matthias no market was allowed. People were to keep only what was a necessity in their household, and give the rest to Matthias for him to put in his temple. “Matthias insisted that the earth and everything on it belonged to God” (Johnson and Wilentz 97). Followers of Matthias were disgusted when they saw him in his costly and absurd clothing, bought with their money he had taken for himself. Matthias appointed Elijah Pierson as Elijah the Tishbite, he would do tasks for Matthias and sit on a lower thrown. It was clear that Pierson feared Matthias, but it was also clear he was insane just like Matthias. Pierson’s old acquaintances were shocked at his bondage with Matthias, the known devilish women hating Prophet. Pierson told his old friends that Christianity was devilish and that they were to remove themselves from their church. He also stressed that the women could not teach and that the man had to take control. Matthias assembled Mount Zion, the household for his Kingdom.

Males labored outdoors doing hard work in fields, and Matthias had very strict orders for the women of Mount Zion. They did all the housework such as cooking, cleaning, and taking care of the children. He was very clear on what could be served at meals. Many of the rules followed the Jewish food laws, but that was insignificant to Matthias. “This food code stemmed not from Matthias’s kinship with the ancient Hebrews but from his hatred of new-fangled, middle class ways introduced by the market revolution” (Johnson and Wilentz 109). The Market Revolution introduced many new cooking supplies that produced nice home baked foods that were now part of a family’s economic status. Matthias would take no part in this and Mount Zion kept eating plain foods in the rural household, while women prepared and served. A huge sexual scandal occurred at Mount Zion and caused the downfall of the Kingdom. Matthias had taken control of everyone in his kingdom so far to the point that he would assign who would have sex with each other.

The scandal consisted of unimaginable sexual events, and even led up to the death of Elijah Pierson. Matthias was arrested for being caught for religious delusion, sexual depravity, and was accused of murdering of Pierson. Matthias’s insanity began when he started realizing he had no money, friends, or any other options but to create his own kingdom and have power. During the time of the Market Revolution and the Second Great awakening material things were very important and religion was becoming extremely relevant. He never accepted the Second Great Awakening or the Market Revolution because he failed at everything he tried, such as the jobs and the churches, and did not find his place. In conclusion, insanity had definitely been sparked and is what started this bizarre cult Matthias leaded during the changes taking place in the nineteenth century.

The Kingdom Of Matthias. (2016, Mar 01). Retrieved from http://studymoose.com/the-kingdom-of-matthias-essay 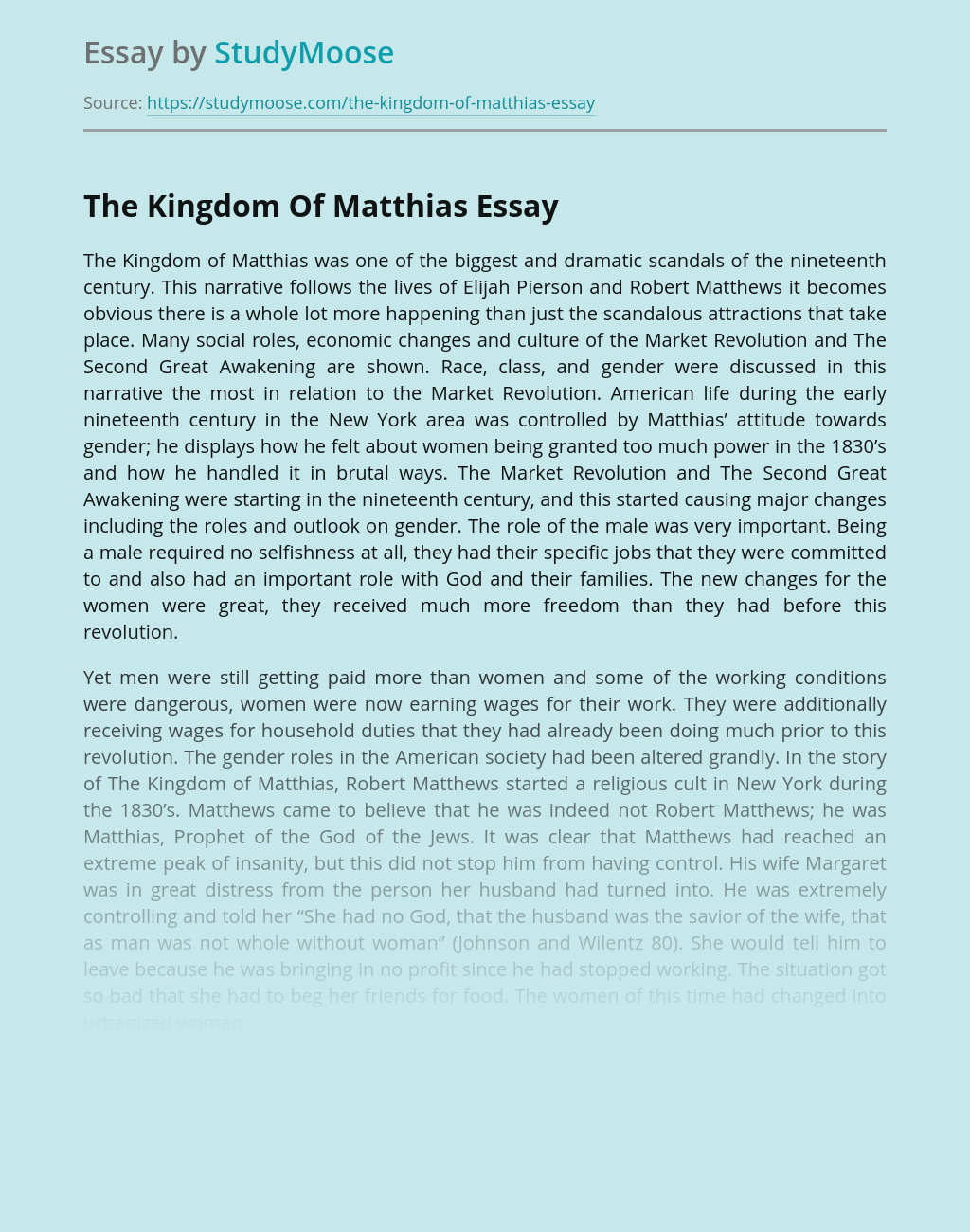 Don’t waste time
Get a verified writer to help you with The Kingdom Of Matthias
Hire verified writer
$35.80 for a 2-page paper
Stay Safe, Stay Original