Reading Lolita in Tehran by Azar Nafisi is very symbolic of the women in Iran, as the ideas of resisting to accept the government, finding a sense of belonging and wanting to live in a fantasy world illustrates their thoughts during a very rough period of time. Nafisi, who represents the women of Iran, displays this via her progression throughout the novel, as it summarizes the struggles that women went through to endure a happy life in Iran. A theme that is repeatedly presented to us in this book is resistance.

Don't use plagiarized sources. Get your custom essay on
“ Reading Lolita in Tehran: Themes – Women in Iran ”
Get custom paper
NEW! smart matching with writer

To be more specific, resistance by women against the new government that has been inaugurated.

The new government taking over, making Iran an Islamic Republic results in the installment of numerous rules and regulations that oppress the female population. Nafisi’s thoughts are displayed when one her students says, “She resented the fact that her veil, which to her was a symbol of a sacred relationship to god had now become an instrument of power, turning the women who wore them into political signs and symbols” (Nafisi 103).

The downgrading of women by the new regime makes Nafisi question her loyalty to her religion and results in her resisting by not wearing her veil.

Not only this, but the regime preventing literature to be taught in Iran, especially work from the Western world causes Nafisi and her students to rebel by meeting in secrecy, despite the severe consequences that they would face if they got caught. When referring to meeting in secrecy, Nafisi says, “That room, for all of us, became a place of transgression” (Nafisi 8).

For Nafisi and her female students, the room that they meet in had become an oasis for them as they are able to zone out from what was going on outside and spend quality time working on the one thing that they all enjoyed… literature.

Iran in the 1970s and 80s consisted of a population of women that were very well-educated. When facing oppression, these women did not shy down from protesting and taking part in demonstrations to get their point through. They had all built up this sense of courage and started using the motto, “it takes courage to die for a cause but also to live for one” (Nafisi 249). This statement made by Nafisi shows their confidence, as it propelled them forward to put up a fight to regain the rights that were lost. As the government tried to demolish their spirits, these women rose up and opposed by displaying their rebelliousness.

Resisting to accept the new government is one of many themes that represents the thoughts and actions of women in Iran. Acceptance is another theme in the novel that can be tied to the symbolism of women during the revolution and war. To begin with, many women had trouble accepting the new Islamic based regime that had taken over. This can be seen by the actions of Nafisi, as she says, “We are not with the regime in our hearts and minds” (Nafisi 313). Even after saying this, Nafisi is compelled by the idea of not being able to teach and pass on her knowledge about literature.

Women like Nafisi realized how helping the youth prosper would lead to a successful country in the future, and did not want to miss out on the opportunity to help, despite their feelings about the new rules. Not only this, but Nafisi is unable to understand how people around her are able to accept the new rules and regulations of the government so easily, as she struggles to cope with the fact that women were being demoralized. Nafisi, along with numerous women in Iran began to feel like outcasts within their own country and battled within themselves to identify the image that they wanted to portray.

This can be seen when Nafisi questions herself, “When I walked down the streets, I asked myself, are these my people, is this my hometown, am I who I am” (Nafisi 74)? Finding a sense of acceptance regarding the revolution and war was their biggest goal but for many, not being able to speak their mind was unimaginable. After struggling to accept the new government, many Iranians decided to make the move to the western world. Nafisi decided that this was the best way to escape her problem of not being able to fit in.

Soon after, Nafisi realized that leaving may not have been the best option for her. She says, “You get a strange feeling when you’re about to leave a place, because you’ll never be this way again” (Nafisi 336). Once again, she starts questioning herself and comes to the conclusion that Iran will always be where she hails from, regardless of the circumstances. Wanting to be accepted was something that women seeked in Iran, but as they fought with the idea of giving in to the regime, many of them were unable to find a way of fitting in and left Tehran for a better opportunity.

The setting in Tehran had become unbearable for women, as the oppression had taken a huge toll on many of them. A way of getting away from this was by comparing the real world to a fantasy world that they could only dream of living in. One comparison that is made, is to an author by the name of F. Scott Fitzgerald. Nafisi and her book club see how their dreams for a better Iran are similar to the ideas that Fitzgerald incorporated in his book. Whilst discussing the book, a students says, “What we had in common with Fitzgerald was this dream” (Nafisi 144).

Not only this, but Nafisi compares her life to Gatsby and sees this fantasy world that he lives in as being the place that they ultimately want to end up in. For the female population of Iran, these dreams had to be fulfilled, as the ideas of freedom and peace in the rest of the world were constantly being displayed. As the novel progresses, Nafisi interprets that dreaming is extremely valuable as she sees opportunity and hope in picturing a better outcome to the troubled times in Iran as seen in this quote, “It teaches you to value your dreams but to be wary of them too, to look for integrity in unusual places” (Nafisi 135).

It is her dreams that strive her forward and keep her fighting for the freedom that she deserves. This novel by Azar Nafisi displays the life of Iranian women as they fought to win back the rights that were wrongfully taken away from them. The females rebelled with great integrity instead of accepting the regime and tried to place themselves in a fantasy world to make things better, but for many, the oppression was too much to handle causing them to flee the country for the sake of giving themselves an opportunity to live a happy life. 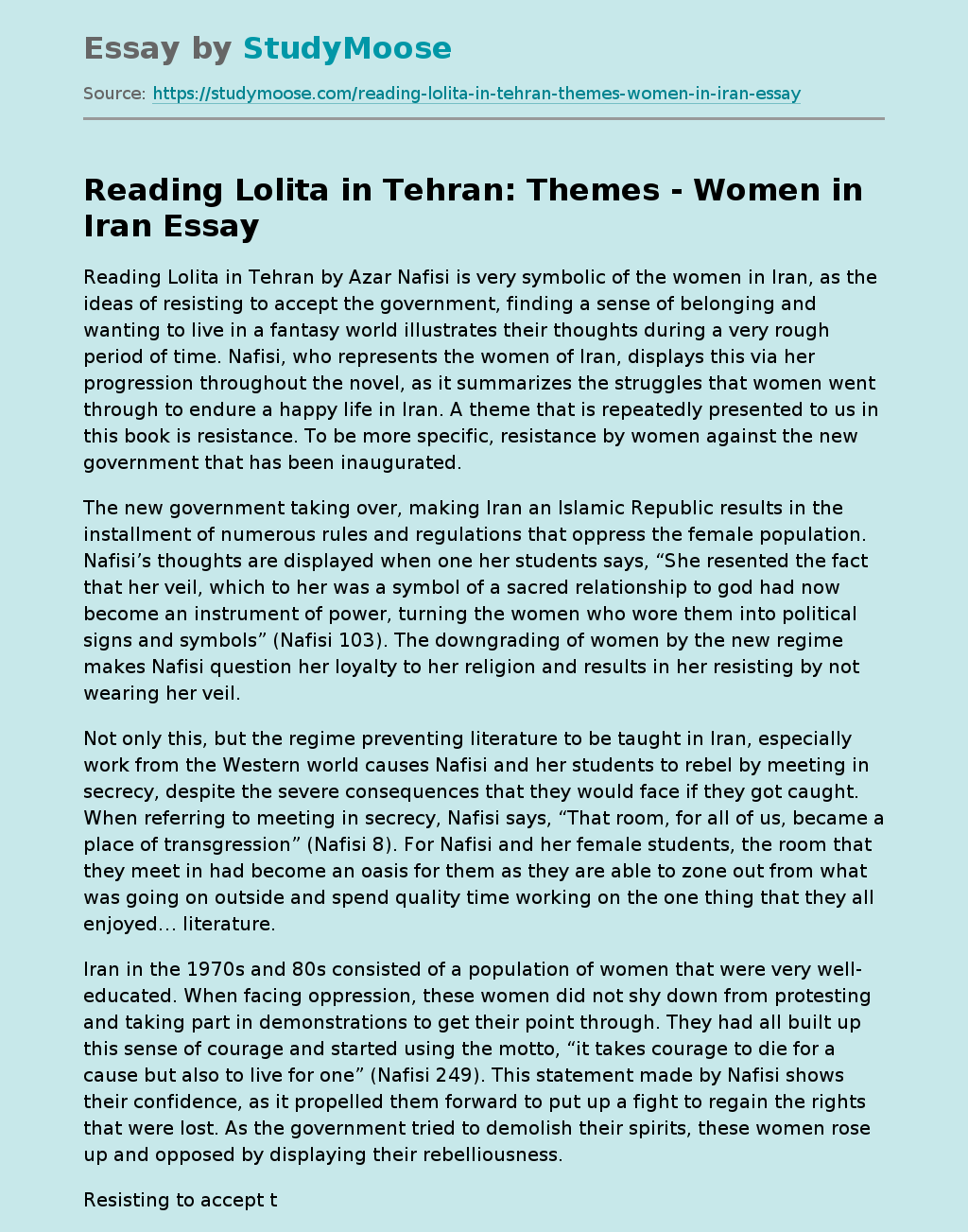