Reaction Paper on "The little prince"

Brief Summary of the Book

The story begins when the narrator look back his childhood life. He drew a boa constrictor digesting an elephant. He showed it to the adults he failed to get hearten with their comments. He felt bad with the grown-ups because they told him to stop his drawing career, instead became a pilot, as they believe that it is the sensible thing to do. So he decided to became a pilot and live his life alone.

One day, his plane crashed in the middle of the Sahara desert, a thousand miles from any human habitation.

Don't use plagiarized sources. Get your custom essay on
“ Reaction Paper on “The little prince” ”
Get custom paper
NEW! smart matching with writer

At his first night, he went to sleep, he was awakened by the odd voice came from the little boy who asked him to draw a sheep. He was surprised of what he saw. He drew the sheep that the boy wanted, but again he failed by his drawing until he came up with a box and threw out an explanation to it.

Proficient in: The Little Prince

That is how he made his acquaintance to the little prince.

He took him a long time to know where he came from, but little by little he learned that the prince came from asteroid B-612. Everything there is small. Through their conversation, everything was revealed to him.

The little prince took much care of his planet. He doesn’t want anything destroyed his home. One day, a rose appeared on his planet. For him, it is the most beautiful creature ever. He fell in love with it but he caught the rose lied to him.

So he decided to leave her and not to trust the rose anymore. To cure his loneliness, he went to the other planets to explore. He found himself in the near planet where he met the king who’s clad in royal purple and ermine, which was at the same time both simple and majestic seated upon the throne. For him, all men are just a subject.

The king believed that he can rule over everything even the moon, the stars and the sun. Then the little prince asked him to order the sun to set. But the king can’t do that just right away. So the little prince decided to leave even though the king offered him to be a minister in his planet. He thought to himself that the grown-ups are very strange. In the second planet, he met the conceited man who believed that he is the most handsome, best dressed, and richest and the most intelligent man in that planet. He thought that the little prince is just an admirer. But the little prince him remind him that he is the only man in that planet. Then he leaved the conceited man with his thought that grown-ups are very odd. In the third planet, he met the tippler who lived alone with his collection of empty bottles and full bottles. He spent his time in drinking just to forget the ashamed of drinking. Little prince puzzled and thought that grown-ups are very, very odd as he continued his journey.

In the fourth planet, he met the businessman who was very busy that don’t even notice his arrival. The businessman count the stars and write the numbers on a paper then put it on his bank for so many years because he claimed that he own the stars. But little prince explained to him that he just wasting his time in a matter of consequences just what he did in his flower. Then he continued his journey. In the fifth planet, he met the lamplighter. It was the smallest of all but it was strange. The lamplighter was forever putting out his lamp and lightning it again. He said that he just followed the orders. The little prince thought that the lamplighter was so faithful to his orders. In the sixth planet, he met the geographer. His planet was the most magnificent but he has no way of knowing if there are mountains, rivers, or seas in planet because it is not important for him to waste his time to explore. He can’t leave his desk. He just wrote on his thick book the information that the explorer gave to him. He advised the little prince to visit the earth because it has a good reputation.

The seventh planet he went is the earth. He lands in the middle of the desert and can’t find any humans. Instead, he met a snake who was pleased to stay in the little prince company because he is innocent and honest in all matters and its poison can send back the little prince to its own home. But little prince ignored the offers and continued to explore. He then found a three-petal flower, climb the highest mountain where he found the echo that makes him confused. He also found a rose garden, which surprises and depresses him because his rose had told him that she was the only one of her kind. He met a fox whom he look after and attempts to tame. He also met some humans, who seemed strange to him. A railway switchman who is unsatisfied, and knows people are unsatisfied, except for children who are the only ones that know what they are looking for.

And a merchant, who sells pills that, will quench thirst and save valuable time. The story of the little prince was ended in the desert where he was with the narrator pilot. They finally find a well to satisfied their thirst and they both agree in knowing that people didn’t see the truly importance of life but just lead mechanical or an empty lives. However, the little prince missed his planet so much that he looked for the snake again to bite him and send him back to his planet. But before he leaved, he gave laughing stars to the narrator pilot. And the plane was able to fix then. He is confident that the little prince has returned to his asteroid. The narrator looked at the lovely and sad landscape of the desert and to the star of his new friend that brightly shining in the sky.

The moral is the importance of looking, listening and understanding, exploring and experiencing to find the real and true meaning of a thing. At the beginning of the story, the narrator point out that the grown-ups doesn’t see the real meaning of his drawings, instead, they just look at the surface without even understanding and knowing its deeper meaning. Grown-ups forgot how to appreciate little thing, how to understand life better, how to learn from own mistakes and how to live simply, and how to value true friendship. This story reminds us not to be like the grown-ups who don’t care anyone, just himself. Not to be like the rose who is liar, obsessed and very demanding. Not to be like king who rules the things that shouldn’t be ruled. Not to be a conceited man who is self-centered. Not to be a tippler who is nothing to do but to drink liquor forever just to remove his ashamed of drinking.

Not to be a businessman who is claimed the things that don’t belong to him just to be rich. And not to be a geographer who doesn’t have time to look around sees what his real world is. Instead, it tells us to be like the lamplighter who is faithful in the orders and very dedicated to do his task. To be like the pilot who admits his mistakes just because of a matter of consequences. To be like the little prince who lives simply, knows how to value friendship and appreciate little things. That’s what the story wants us to learn. It’s better for us to look closely, listen well and understand deeply, explore somewhere and experience everything first for us know how to value life and appreciate everything without hurting and destroying someone and for us not to end for such a fool.

The grown-ups, the king, the conceited man, the tippler, the businessman and the geographer was abused their freedom because of their wrong doings in themselves and in other creatures of God. The grown-ups don’t appreciate little things and their rude comments that hurt the feelings of other people; the king was greedy in power for him to rule the things that should be ruled only by God; the conceited man was selfish and forgot to value people around him; the businessman was not contented of what he had, he wanted to own the other creatures of God; the tippler was abused his health every time he drinks liquor for his only purpose of removing his shame; and the geographer that the only thing he knows is to write the information that the explorer given to him without providing a little time to look at the creations of God. These people are selfish because they just think about for their own happiness.

Moral Obligation – humanity must do good and avoid evil; all human are responsible to their neighbors as they are to their own actions. The lamplighter, the narrator pilot and the little prince are the humans that do good and avoid evil. The lamplighter is very responsible in doing his task and faithful even though there are no other people in his asteroid except him; the narrator pilot who knows how to treat a stranger and value a friendship even if he will not see little prince anymore; and the little prince knows how to appreciate little things, how to love all the creations of God and just like the narrator pilot, he knows also how to value a friendship.

Reaction Paper on "The little prince". (2016, Apr 23). Retrieved from http://studymoose.com/reaction-paper-on-the-little-prince-essay 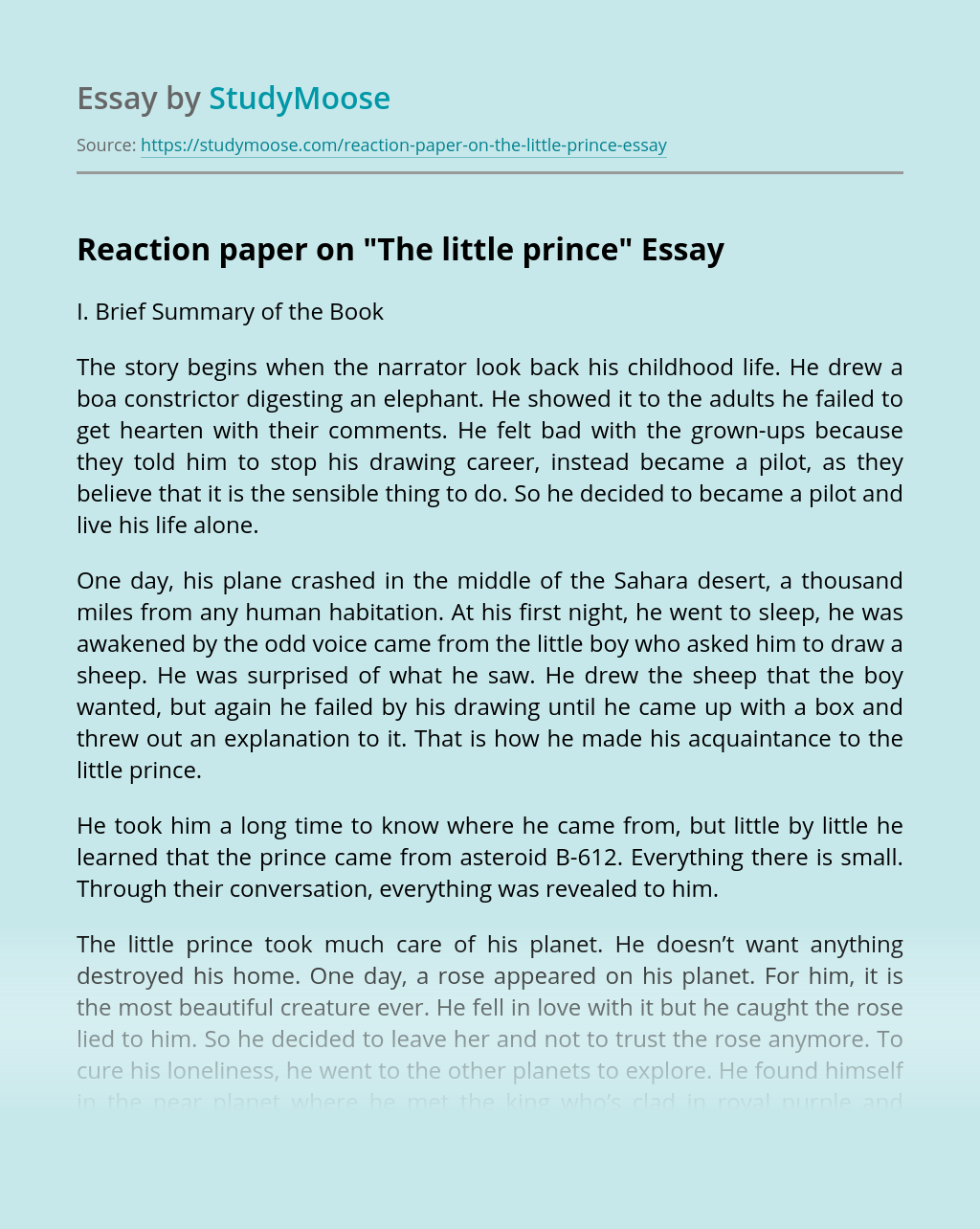