The play that I viewed was The Little Prince on October 18th 2012 at the Carousel Theatre. Even though I enjoyed the performance, I thought it was unique in a certain way. There was something about this performance that was just different from any other play I have attended. Overall The Little Prince was a great experience and I enjoyed it. In the following paper I will talk about the research of this play as well as a critical analysis of the costumes, acting and the sets and props used during this play.

Don't use plagiarized sources. Get your custom essay on
“ The Little Prince Play Reaction Paper ”
Get custom paper
NEW! smart matching with writer

Before I even took this course, I have heard of The Little Prince many times. It was until after I did some research that I figured out how popular this novella really is. After doing some research and looking on several different websites is when I found out that the book The Little Prince was so popular in general. I found out that the book was first published in 1943 and is the most famous work of the French writer Antoine de Saint-Exupéry.

Proficient in: The Little Prince

After even more research, I also found out that the novella is both the most read and most translated book in the French language, and was voted the best book of the 20th century in France.

Then came the research of the writer of this play Antoine de Saint-Exupéry. I was kind of amazed when I was reading the program about the writer of this novella, The Little Prince. What surprised me the most was that he had such a strong interest in Aviation and didn’t grow up wanting to be a writer or anything.

Then once he was dismissed from being a fighter pilot because of his age, he decided to write the best book of the 20th century in France. Overall the research of this novella and the writer himself, Antoine de Saint-Exupéry, truly surprised me. Overall, after research I did on the novella as well as the writer of the novella, I realized how popular it actually is.

Normally, at least to the plays that I have been to they normally dim the lights or put the curtains down to move objects on stage around. Instead of dimming the lights and shifting stuff around in this play, the cloud suit “others” moved props around on stage while the entire audience could see them. That was very different then what I have ever seen before. Lastly, is the props and sets that were used in this play. The sets and props used were simple unlike the costumes and acting. The main object that makes me use the word simple was the 2 propellers on stage that resembled a plane. Of course, you can’t bring a plane on stage so using the 2 propellers was a simple/unique way to resemble a plane on stage.

In conclusion, I am glad I attended this play and ended up enjoying it. I have been to a few plays throughout my life and this was probably the best of I have been to so far. In summary, I found out how popular this play really was and got to find and do some research on it to educate myself even more on this great novella. The story behind Antoine de Saint-Exupéry and how he was so much into aviation and then was just dismissed and wrote this popular of a novella was truly surprising. The acting was amazing when it came to distinguishing yourself between different characters. The costumes were very elaborate when it comes to how the actors/actresses dressed. The sets and props were quite simple meaning that nothing huge and elaborate was used on stage to resemble something. I hope the next play I attend will surpass this one. 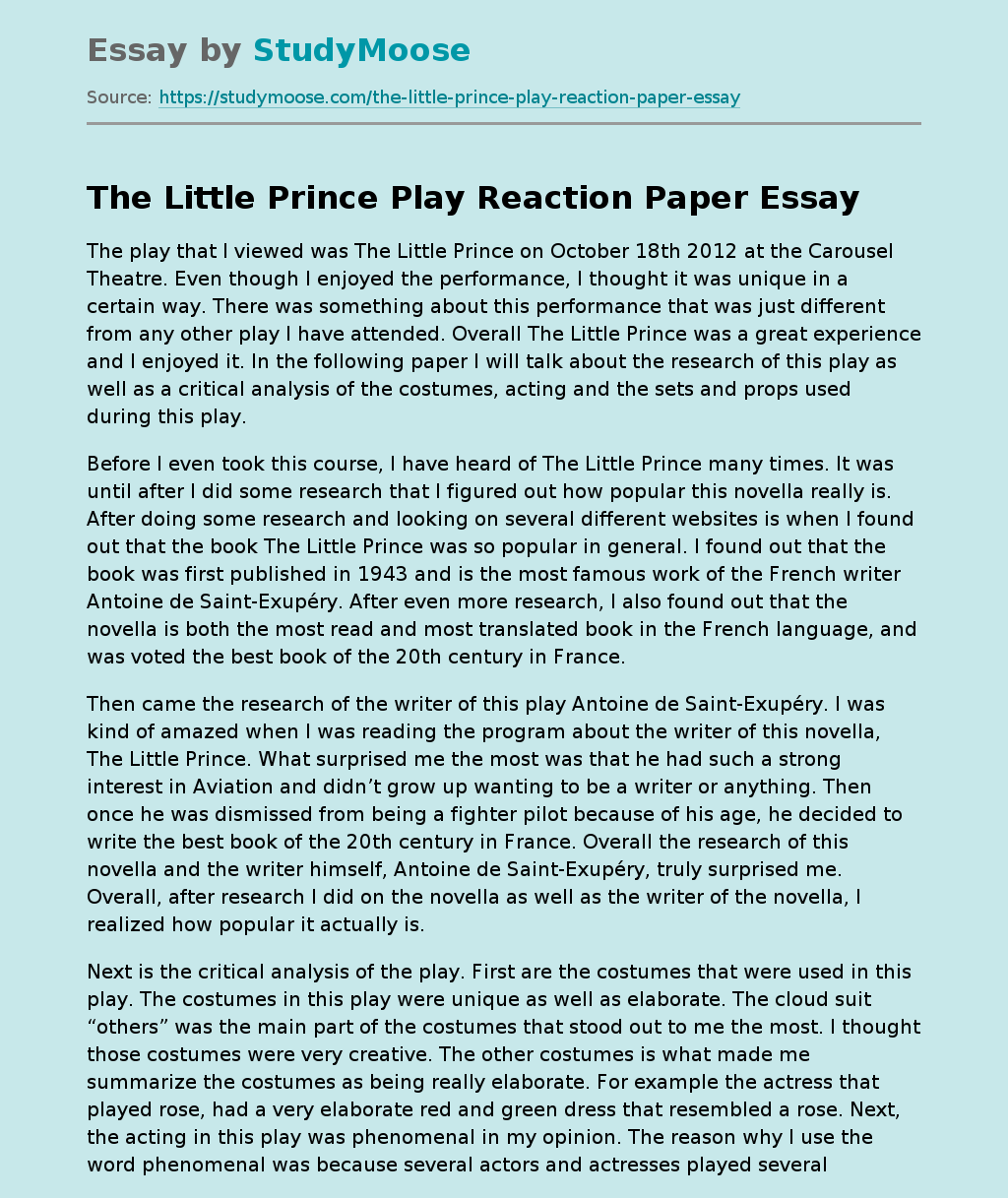