IV. Opening Story: Both Farhan and Raju wants to meet again their fellow collegian, Rancho after faking a stroke abroad an Air India plane, and excusing himself from his wife respectively. On the way to destination, they encounter another student, Chatur, now a successful businessman, who reminds them of a bet that they had undertaken 10 years ago.

As they are recollecting hilarious funny act, including their argument with the Dean of Delhi’s Imperial College of Engineering, Viru Sahastrabudhe, race to locate Rancho, at his last known address. Little they did not know about the secret that was kept from them all this time. V. Passing action: Farhan, Raju, and Rancho are three engineering students who share a room in the residence of Imperial College of Engineering (ICE).

Farhan is studying engineering to pursue his father’s wishes over his own wish that is to become a wildlife photographer. Raju is studying to raise his family’s fortunes and get them out of poverty. On the other hand, Rancho studies for his simple passion in machines and devices.

Rancho believes that success in studying is not achieved by solely memorizing definitions given by textbooks or professors, but by understanding and applying the concepts. He believes that one should follow excellence, not success, as success will come itself if excellence is followed.

VI. Rising Action: Things further escalate when the three friends drunkenly break into Virus’s house one night to allow Rancho to confess his love to Pia, and urinate on the front door before fleeing. The next day, Virus threatens to rusticate Raju unless he squeals on Rancho. Not wanting to betray his friend or let down his family, Raju attempts suicide and ends up paralyzed. Following his recovery, Raju discards his fear of the future. Encouraged by Rancho, both Raju and Farhan gain courage to do what they were afraid to do before. Raju takes a frank approach in an interview for a corporate job, while Farhan convinces his parents to allow him to pursue his love of wildlife photography, both successful in their endeavors.

VII. Climax: Their story is framed as intermittent flashbacks from the present day, ten years after Chatur bet that he’d become more successful than Rancho. Having lost contact with Rancho, who disappeared during the graduation party and went into seclusion, after five years, Raju and Farhan begin a journey to find him. They are joined by Chatur, now a wealthy and successful professional in the USA, who is looking to seal a deal with a famous scientist and prospective business associate named Phunsukh Wangdu. When they find Rancho’s house in Shimla, they find a completely different man: the real Rancho. From him, they come to know that their friend was a destitute servant boy “Chhote” who loved learning, while he, the real Rancho, disliked study. After seeing the boy’s intelligence, the family agreed to let the servant boy study in Rancho’s place instead of laboring.

In return, the real Rancho would pocket his qualifications and after graduating, the servant boy will cease all contact. The real Rancho reveals that Chhote is now a schoolteacher in Ladakh. At the same time, they find out that, without Rancho, Pia decided to marry the same price-obsessed banker that Rancho initially talked her into dumping, and they go to rescue her from the wedding. VIII. Falling action ending: Raju and Farhan find Pia and arrive at Rancho’s school. Pia and the fake Rancho rekindle their love, while Chatur mocks Rancho for becoming a lowly schoolteacher. He asks Rancho to sign a “Declaration of Defeat” document. When Rancho’s friends ask what his real name is, he reveals that he is actually Phunsukh Wangdu himself. Chatur finds out about this and is horrified; he accepts his defeat and pleads his case with Phunsukh to establish the business relationship he was after. 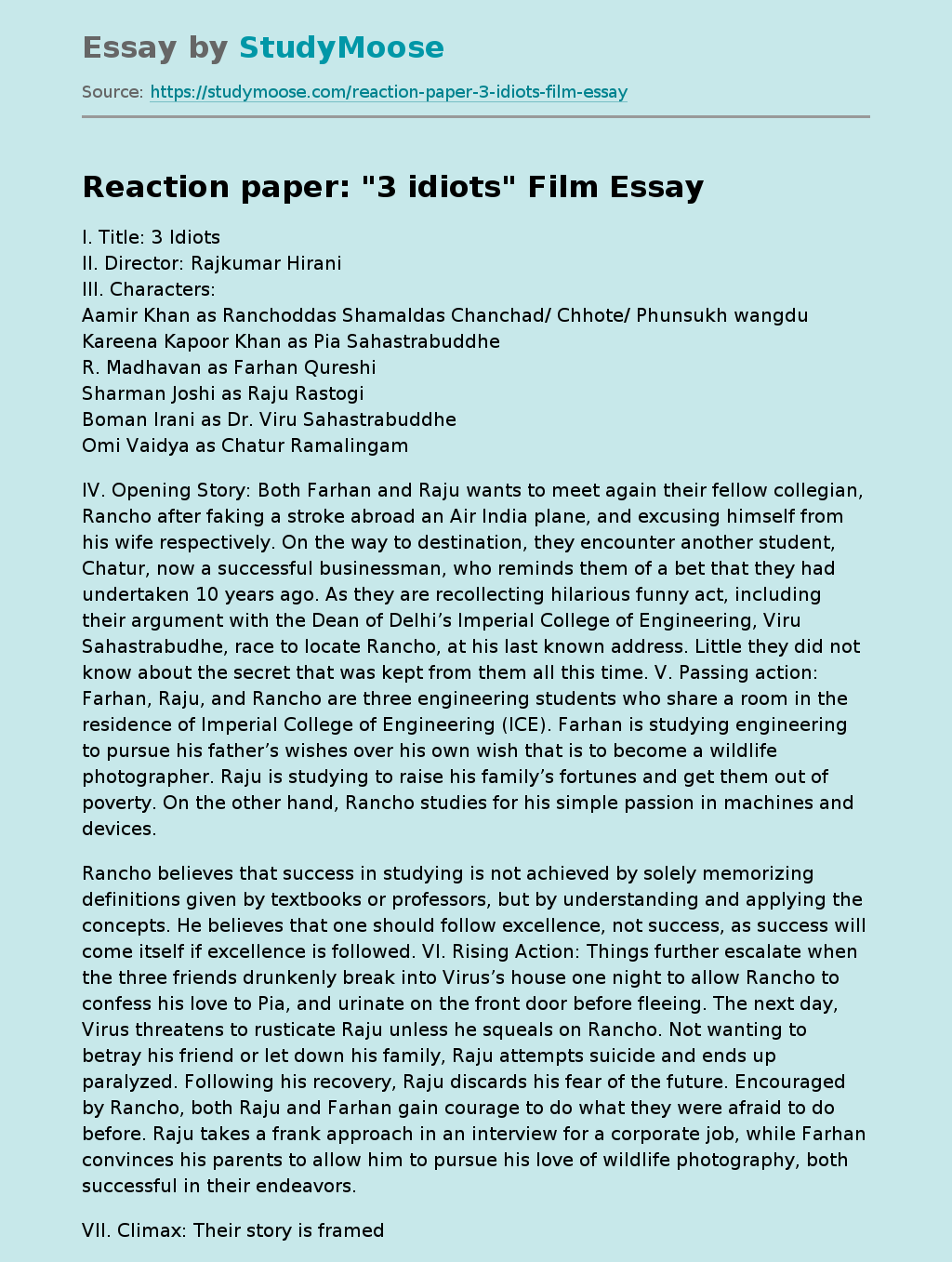