The “3 Idiots” is an Indian movie that was released on 2013. The movie that was directed by Rajkumar Hirami used a comedic and slice of life genre to portray the reality of what students of this day experience. Through a reader-response approach, this paper aims to criticize the movie about the educational opportunities, prevailing educational system and the mental health of the students and tackle the positives and negatives we saw in the movie.

This movie is about three classmates named Raju, Farhan and Rancho(Phunsukh), who are going through college with engineering as their course.

Don't use plagiarized sources. Get your custom essay on
“ Critique Paper on Movie 3 Idiots ”
Get custom paper
NEW! smart matching with writer

But with the pressure from their parents, professors, and society, it became a really big hindrance to them. The movie’s message simply is to be a person who fights for their dreams and to follow your heart no matter what people say; to always pursue your passion and to believe in your own capabilities no what life throw at you to bring you down; to challenge the norms even if you are scared; to do what you truly love to succeed with no regrets; and that you are not alone in facing complicated problems.

There are scenes in the movie that automatically proves the educational system to be wrong. First is the scene where the teacher would only accept answer about “what’s a machine” based on a literary context. We could clearly see here that the teacher is biased and that the system is forcing knowledge through out-dated methods. The next scene that we would like to point out is the time “Viru” would emphasize that the words “Compete or die” which is one of the reasons why the students are not enjoying learning anymore.

It’s a constant battle field of survival at this point.

We observed that most students are willing to risk everything, especially their health as they would skip meals and sacrifice their time to sleep in order to study and do their school works. Just for the sake of passing or being at the top. Pressure also plays a big role here as the expectations, the responsibilities, and the fear that they may not impress their parents are the root of it, causing weak mental illness to the students. Joy Lobo and Raju’s case is a good example here. There are also the societal expectations whereas one must have a degree or diploma in order to have a decent job and to be able to get married. As seen in parts of Raju and his family, his mother is worried for her daughter and husband, and Raju being desperately praying and studying in order to pass.

Throughout their college life, friendship is what kept them sane. It is important because when one is having problems and could not consult or reach their family, there is a friend that can help you through it. Also, if their bond is strong, nothing can separate them even if there are challenges and no matter how long they didn’t see each other. They also have the trust for each other that will never break through whatever problems that they encounter. This is depicted throughout many scenes such as the part where Raju and Farhan promised to throw away their beliefs and follow what their heart wants them to do in exchange of to Rancho confess his love for Pia, the time where both Rancho and Farhan supported Raju and his family in the hospital, and that time where Farhan and Raju still treats Rancho the same way when they found out who he really is.

Overall, “3 Idiots” was a great movie with a great cast that truly brought to life its script and story. It was very impactful to its target audience which ranges from teenagers to adults, especially students, and was known, not only in India, but on the whole world. It spread awareness on issues regarding the educational system of most universities that puts too much stress to their students and at the same time, encourage us to fulfil our dreams. Another great Indian film entitled “Udaan” also showed us that we should pursue our dreams and follow our heart though it lacks the comedic flair of “3 Idiots”. In regards with that, this film is definitely a must-watch, with its great story, script, cast and impactful meaning. 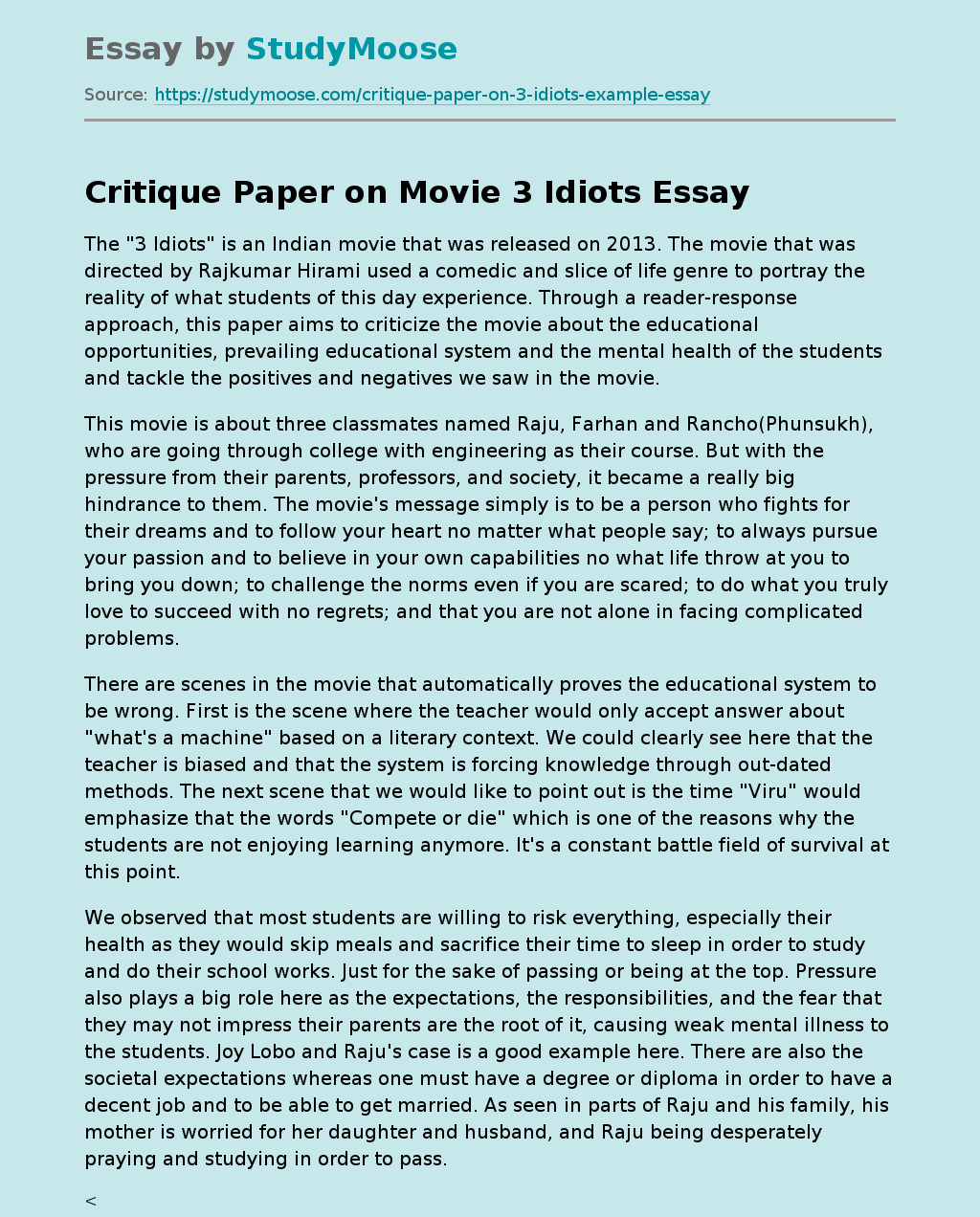