Man acts according to what he feels. His actions are characterized by emotions that he is experiencing. Good or bad, it defines his role as a man of action or an intelligent man. A man of action does things expected of him. He plays by the rules. He does things that needs to be done whatever the cost may be . The only price is happiness and contentment of doing what is necessary for the benefit of another human being. A man of action encompasses the manifestations of physiology or human body and his mind sees himself as different to others and that he can make a change or influence the course of history.

Don't use plagiarized sources. Get your custom essay on
“ Notes from Underground ”
Get custom paper
NEW! smart matching with writer

Here is an account taken from Notes from Underground: Such a gentleman simply dashes straight for his object like an infuriated bull with its horns down,and nothing but a wall will stop him. For a man of action, what you see is what you get. According to Confucius, “I hear and I forget.

I see and I remember. I do and I understand”, that is a man of action; doing and acting with nobility not only to be remembered but also to be a model for others. An example of a man of action is Mahatma Gandhi.

Mohandas Gandhi has become the strongest symbol of non-violence in the 20th century. In South Africa Gandhi worked to improve living conditions for the Indian minority. This work made him develop a strong Indian and religious commitment, and a will to self-sacrifice.

His example shows the world that all can be equal and will benefit from democracy that would bring peace to humanity. An intelligent man sees things in a different light. It is seen through actions taken with wit.

An intelligent man before he acts, uses his mind and devices a plan on what ought and should be done. Here is an example taken from Notes from Underground: Your surname 2 But do you know, gentlemen, what was the chief point about my spite? Why, the whole point, the real sting of it lay in the fact that continually, even in the moment of the acutest spleen, I was inwardly conscious with shame that I was not only not a spiteful but not even an embittered man, that I was simply scaring sparrows at random and amusing myself by it.

It may not be for the common good but it is the right choice. The goal is to fit in his social environment, to shadow the pain, burdens or motives that he is feeling and he has in mind. From an intelligent man, the intentions are hidden and facade is given to the audience – the society. An example of an intelligent man is Adolf Hitler. He has a dream of having an empire under his control and posed the greatest threat to democracy also in the 20th century while Gandhi is promoting it.

During his reign many people died and experienced the wrath of discrimination especially the Jews. I am not imposing that being an intelligent man is bad and a man of action is better. It is on the our discretion on how to use our intelligence or strength that would tremendously help or harm mankind. There is no right or wrong decisions. It is how you manage your decision the good way. Life is not not an easy one but it can be good. 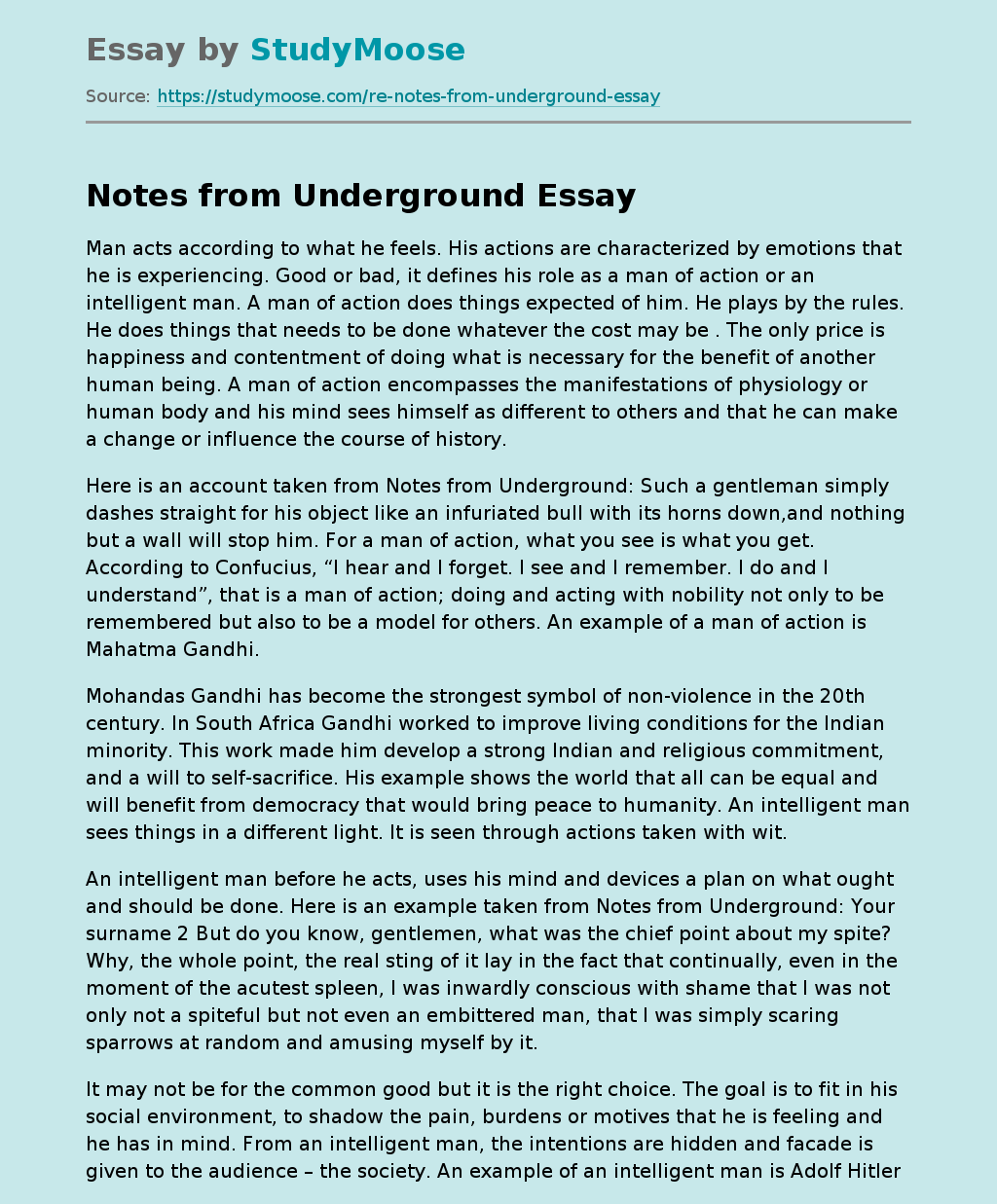