Justice and Legality in Shakespeare’s Measure for Measure

In this brief paper, legality will be taken to mean as “doing what the written laws or accepted customs require. On the other hand, justice refers to “doing for any person what is fitting and proper for that person. ” Often dubbed as a “dark” comedy, Measure for Measure is comprised of characters that are confronted with moral dilemmas. The characters that will be analyzed based on the legality and justness of their actions are the Duke, Angelo, and Isabella. These three characters are interrelated in the sense that their actions affect the other characters in the play.

Don't use plagiarized sources. Get your custom essay on
“ Justice and Legality in Shakespeare’s Measure for Measure ”
Get custom paper
NEW! smart matching with writer

This makes the plot complex just like in most plays of Shakespeare.

Also, not only does Measure for Measure abound with intrigue and revelation but also with pertinent questions on freedom, sexuality, morality, and the Law. Hence, a reading of the characters necessitates an understanding of the questions the play raises. After analyzing the characters’ actions, the concluding part will look into the link between legality and justice.

As I will argue, legality and justice are not one and the same. Rather, they are relational instances that are apparent in the actions of the characters. The play opens with the Duke assigning his role as leader of Vienna to Angelo.

Angelo tried to decline at first yet the Duke was firm in his order. At the offset, one may immediately judge whether the act of the Duke and Angelo is just and/or legal. As the formal ruler of Vienna, the Duke gives up temporarily his mandate to Angelo.

One may wonder what could be more important and urgent for the Duke than rule the whole of Vienna. By leaving his job as ruler, it may appear that the Duke’s act is illegal. However, if we understand the Duke’s action in the context of monarchy, what he did was not illegal for the precise reason that he embodies the law itself.

Whatever the Duke says or wishes to do is considered the Law. On the part of Angelo, his obedience to the Duke’s order is lawful as it is his role to follow whatever the latter asks him to do. We then learn that with his new position as Duke, Angelo implements strictly the already existing law against fornication. We can confer from the beginning part of the play that Angelo complies fondly with the moral law. This caused Claudio to be imprisoned for impregnating Juliet, his lover, even though the sexual intercourse was consensual. In the following scene, the character of Isabella appears.

As a morally uptight person and a loving sister of Claudio, Isabella begged Angelo to release his brother from prison. Angelo promised to show mercy only if Isabella sleeps with him. Shocked and disgusted, Isabella refused. In this scene, we come to know the hypocrisy of Angelo with regard to the moral law he imposes to the people. He bans illicit sexual activities yet he himself asks Isabella to sleep with him. Angelo’s actions are therefore illegal. In relation to Isabella, Angelo is being unjust since what he is asking of Isabella is not fitting for someone who is just about to enter the nunnery and serve God.

The dilemma faced by Isabella – whether or not sleep with Angelo so as to save Claudio – is intriguing for it involves two virtues that must be upheld by a religious woman as herself. One virtue is chastity, of not giving up to the sexual condition of Angelo. On the other hand, she is also required to fight for the release of his innocent brother who was unfairly imprisoned. In the end, Isabella chose chastity over Claudio. By declining the sexual condition of Angelo, Isabella is being legal in the context of the moral law. Her choice not to sleep with Angelo attests to her determination to remain a virgin for God.

However, the other side of the coin consists of her unjust act to leave his brother in prison. When the Duke, as a friar, intervenes to help Isabella, his plan was to trap Angelo so his only choice would be to release Claudio. In the Duke’s plan, Isabella will seduce Angelo to sleep with her. The moment Angelo takes the bait, Isabella would give up her place to Mariana who is Angelo’s former lover. By unwittingly sleeping with Mariana, Angelo would thus prove guilty of sexual immorality and would later on be forced to release Claudio.

The plan, however, did not entirely succeed because after sleeping with Mariana, Angelo did not order the release of Claudio. By helping Isabella, the Duke who is pretending as a friar, was in fact being just in a sense that he is trying to help in the release of Claudio. Meanwhile, Angelo resolute stand not to release Claudio is illegal since he is in fact the one who truly committed a prohibited sexual act. If he is really staunch in disciplining the people then Angelo must put his own self in jail. The end part of the play consists of the Duke’s return as the ruler of Vienna.

With his power over the people, the Duke was able to make everyone confess their wrongdoings. Angelo eventually admitted his misdeeds and Claudio was released from prison. The Duke then asks Isabella to marry him. The final scene exhibited the just and legal act of the Duke to release the innocent and correct the wrong. Angelo’s confession can be seen as just since he is committing what is proper to a person like himself. It can also be read as legal since his confession complies with the order of the Duke. Isabella, on the other hand, was just in the sense that she still pursued the issue of his brother’s release.

Her choice to marry the Duke, if ever she does, will be legal as it is form of obedience to their ruler. Based from the characters’ actions, we may say that legality and justice are two different instances. The reason for being such is the fact that they are grounded on two different frameworks. Legality is based on the written law that is invoked in order to judge a particular action of a character. On the other hand, justice is based on the personal opinion of the characters that is used for the evaluation of certain actions.

However, after probing into the actions of the characters, we see that their personal opinions are in fact strongly influenced by the established moral law. For instance, Isabella’s choice not to sleep with Angelo, although personal, is rooted in the moral law that dictates to have illicit sex is sinful. Along the same vein, Angelo’s seeming personal choice to confess depends heavily on the order imposed by the Duke. The boundary therefore between the personal and the outside basis for judgment is diluted. Thus, in the context of Measure for Measure, justice is subsumed into the realm of legality without necessarily being reduced to it.

Justice and Legality in Shakespeare’s Measure for Measure. (2017, Mar 15). Retrieved from https://studymoose.com/re-justice-and-legality-in-shakespeares-measure-for-measure-essay 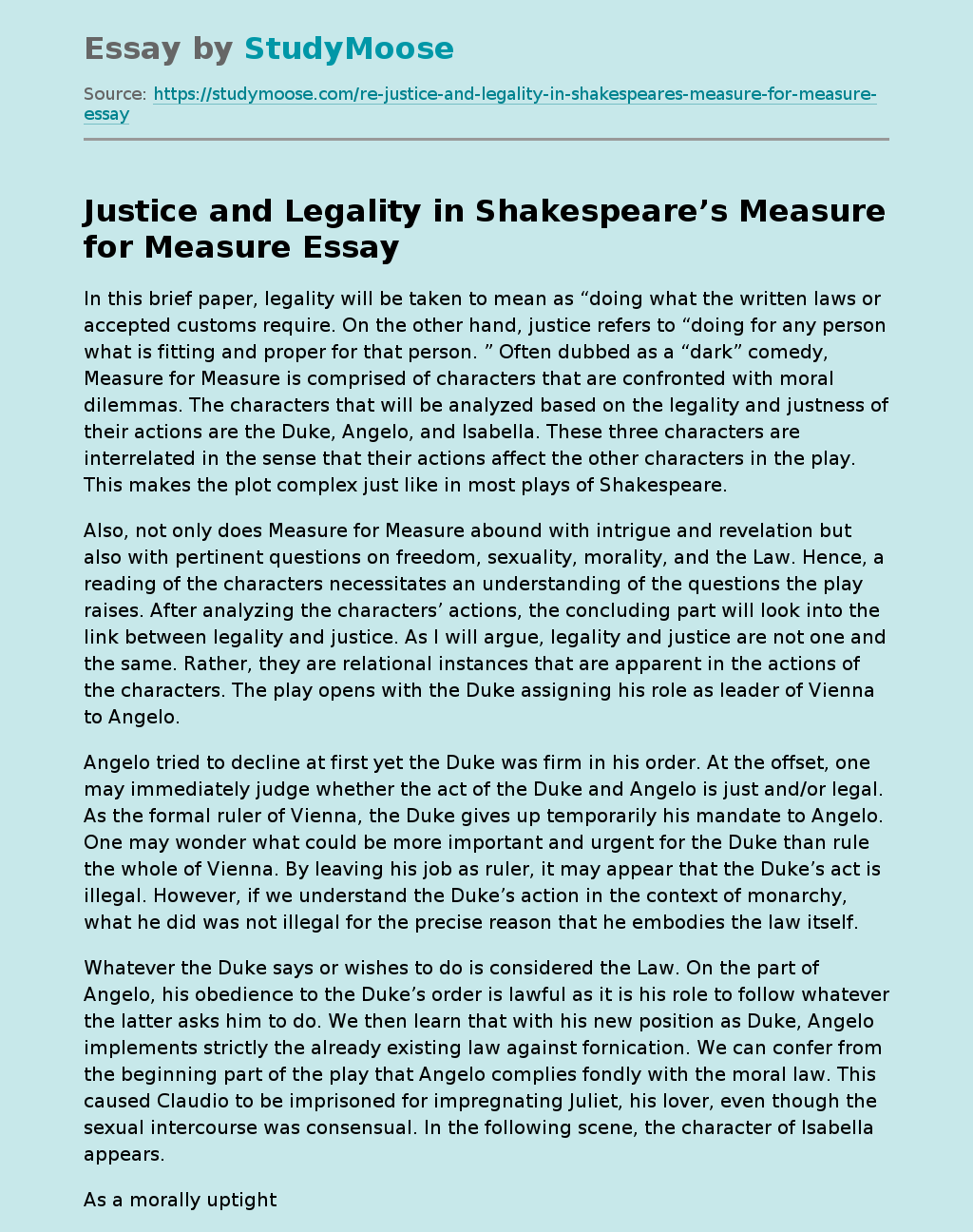