Don't use plagiarized sources. Get your custom essay on
“ Measure for Measure ”
Get custom paper
NEW! smart matching with writer

He is often associated with bawdy humour but is also associated with noblemen; which brings his character into debate. The main source of trickery which engages the audience is the ‘bed trick’ which is cunningly devised by the Duke, which again brings his and also Isabella’s character into debate. Lucio is one of the main sources of comedy in ‘Measure for Measure’, his humour and almost careless speech engages the audience which will result in the audience liking his character.

His speech on occasions appears to possess no restraint which is evident from his conversation with the two gentlemen when he proudly proclaims ‘I have purchased as many diseases under her roof as come to’. Lucio’s tone suggests the he is proud of this achievement which in turn results in the audience being humoured by Lucio. However Lucio’s proclamation also gives the audience reason for concern as it shows that there is a problem in Vienna with widespread disease.

This relates to the outskirts in London in Shakespeare’s era as there were a large number of brothels which resulted in widespread disease.

Lucio also humours the audience when he slanders the Duke in the presence of Friar Lodowick who is ironically the Duke. Lucio describes the Duke as being ‘A very superficial, ignorant, unweighing fellow’. There is dramatic irony throughout act three scene two as the audience know that Friar Lodowick is indeed the Duke, therefore will be constantly humoured as Lucio unknowingly slanders the Duke without a care.

Lucio’s use of ‘ignorant’ to describe the Duke is very ironic as Lucio himself is ignorant to the fact the Friar Lodowick is the Duke. As of yet Lucio is painted as being a bawdy character solely to humour the audience with his ridiculous imagery ‘some say a sea maid spawned him’. However he is often associated with noblemen such as Claudio ‘One word good friend. Lucio, a word with you’. Therefore Lucio can be seen as representing both noble and the low culture societies, therefore the audience will have to judge Lucio and decide.

I find Lucio interesting as he is presented as a random and spontaneous character, he also confesses that he will never change his attitude ‘I am a kind of burr, I shall stick’. Lucio’s character appears to contradict puritan ideas and I believe Shakespeare uses Lucio as a tool to get his message across. Using Lucio is a great example Shakespeare is stating that we need variety in life in order to function ‘Why, ‘twas a commandment to command captain and all the rest from their functions’. Shakespeare is saying everyone has a role in life which only ‘God’ can change; this again puts emphasis on the variety of people.

This idea relates to the theme of equilibrium, in this diverse society there will be equilibrium between people. The main source of trickery in the play is the ‘bed trick’ which has been cunningly planned and devised by the Duke ‘we shall advise this wronged maid to stead up your appointment, go in your place’. Thus exposing Angelo as a result, the trickery will also give insight to the Duke being deceptive. However the reader will question Isabella’s actions as she appears to be a keen accomplice in the trick ‘The image of it gives me content already’.

This painted image of Isabella conflicts with that the audience has been accustomed to, Isabella is often seen as excessively pious as she ‘rather wishes a more strict restraint on the sisterhood’. The audience will therefore gain a different perspective of Isabella as well as being sceptical on her position in the sisterhood, she appears to show no insight to the effect(s) this trick will have on Angelo and Mariana as well as her own reputation; instead she seems to immediately agree with the decision without hesitation.

The audience will believe Isabella is thinking only about herself, as she wants to exposes and humiliate Angelo for his earlier refused proposal to Isabella. The use of ‘content already’ shows that Isabella appears to be excited and eager about this proposal, the tone also appears to be joyful again emphasising her eagerness. To summarise, comedy and trickery are both key aspects of the play which engage the audience into debate. 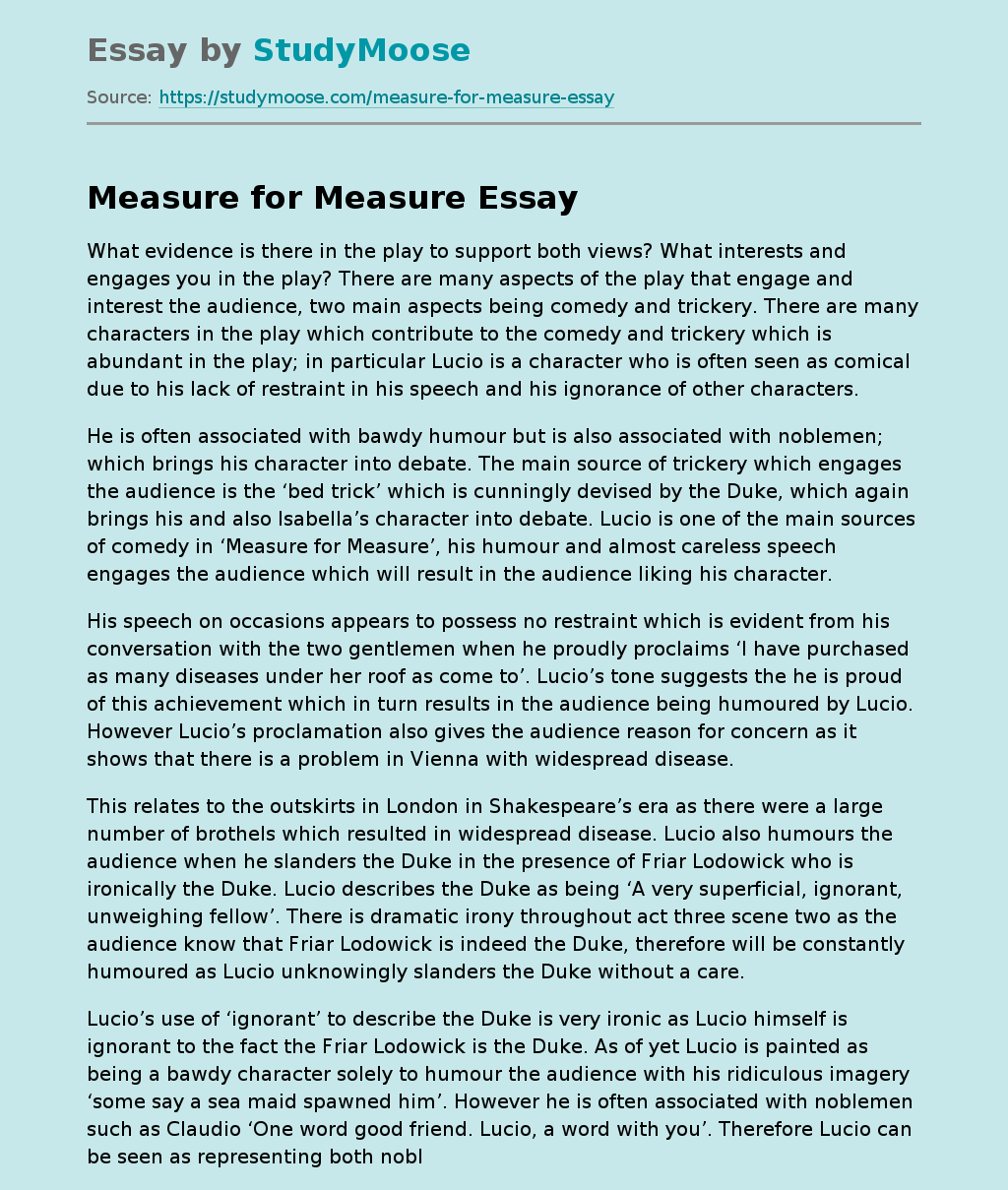