Shakespeare presents the Duke in “Measure for Measure” as an authorative figure, as he is highly respected and referred to as “my Lord”. In the first instance, we get the impression that the Duke is portrayed to be a public body. He seems very connected to his people and comes across as a very superior leader to them. He is generally aware of the situation of his city the fact that he mentions

” Of government the properties to unfold

Would seem in me t’affect speech and discourse”

These are one of the Dukes very first words in the play; his speech gives us an impression of the plays central theme, which has to do with “government, properties, and speeches”.

Don't use plagiarized sources. Get your custom essay on
“ Discuss Shakespeare’s dramatic presentations of the Duke in Act I of ‘Measure for Measure’ ”
Get custom paper
NEW! smart matching with writer

Shakespeare gives the Duke authority in this play but in the very first instance we get the impression that he does not use this authority very wisely, his language and manner towards the people in the opening scene confirms this.

The Duke is at the top of the hierarchical stage, but his use of language such as “pregnant” which is a metaphor for showing gives the audience a strange impression on the Dukes character and instantly we become some what aware of the sexual content of this play. Strangely enough the Duke decides to let “bid come before us”.

Play opens with Duke handing over power to his third deputy Angelo and Duke reminds Angelo he has power to either sentence to death or grant mercy. The Duke the falls into a dilemma and comes to a conclusion that the person in charge should be Angelo

“For you must know, we have with special soul elected him our absence, to supply lent him our terror, dressed him with our love and given his deputation all organs”

The Duke then leaves the City of Vienna in the capable hands of Angelo and perhaps to test if his “worth is able” or probably to see how a state should be ruled.

However the most interesting thing about the Duke is in Act I we get the impression that through out the play the Duke acts as a arbiter of justice. The character of the Duke helps the audience understand the play; it also creates suspense and adds hindsight view, which only the audience can see. We know something about the Duke before the charters in the play know. The fascinating element of his character is that he has two sides to it at first we notice that the Duke is a very public man as he takes control of the city. On the other hand he leaves the city in moral decay. At this moment the Duke is aware of the cities state and goes under disguised as a friar and there too he acts as a “fond father”. He is like a father like figure to the citizens and.

In the conclusion, the Duke is portrayed to be a rather interesting character in comparison with others. He is a authoritive man who has the power to do almost anything to his city but willingly hands it over to his right hand man called Angelo while he conceals he identity as a Duke and turns into a friar, this emphasizes the view that the Duke is kind of a political figure. All his disguise and hiding from the crowd exposes him to be a rather as he

But do not like to stage me to their eyes”

Never the less the Duke is most to blame for the state of the city and he is equally as responsible for the acts in play then anyone else. Although the Duke is represented to be a hierarchical character that is at the very apex of the stage he is just as low in moral values as the other characters. This is what makes him a to a certain extent an interesting character.

Discuss Shakespeare's dramatic presentations of the Duke in Act I of 'Measure for Measure'. (2020, Jun 01). Retrieved from http://studymoose.com/discuss-shakespeares-dramatic-presentations-duke-act-measure-measure-new-essay 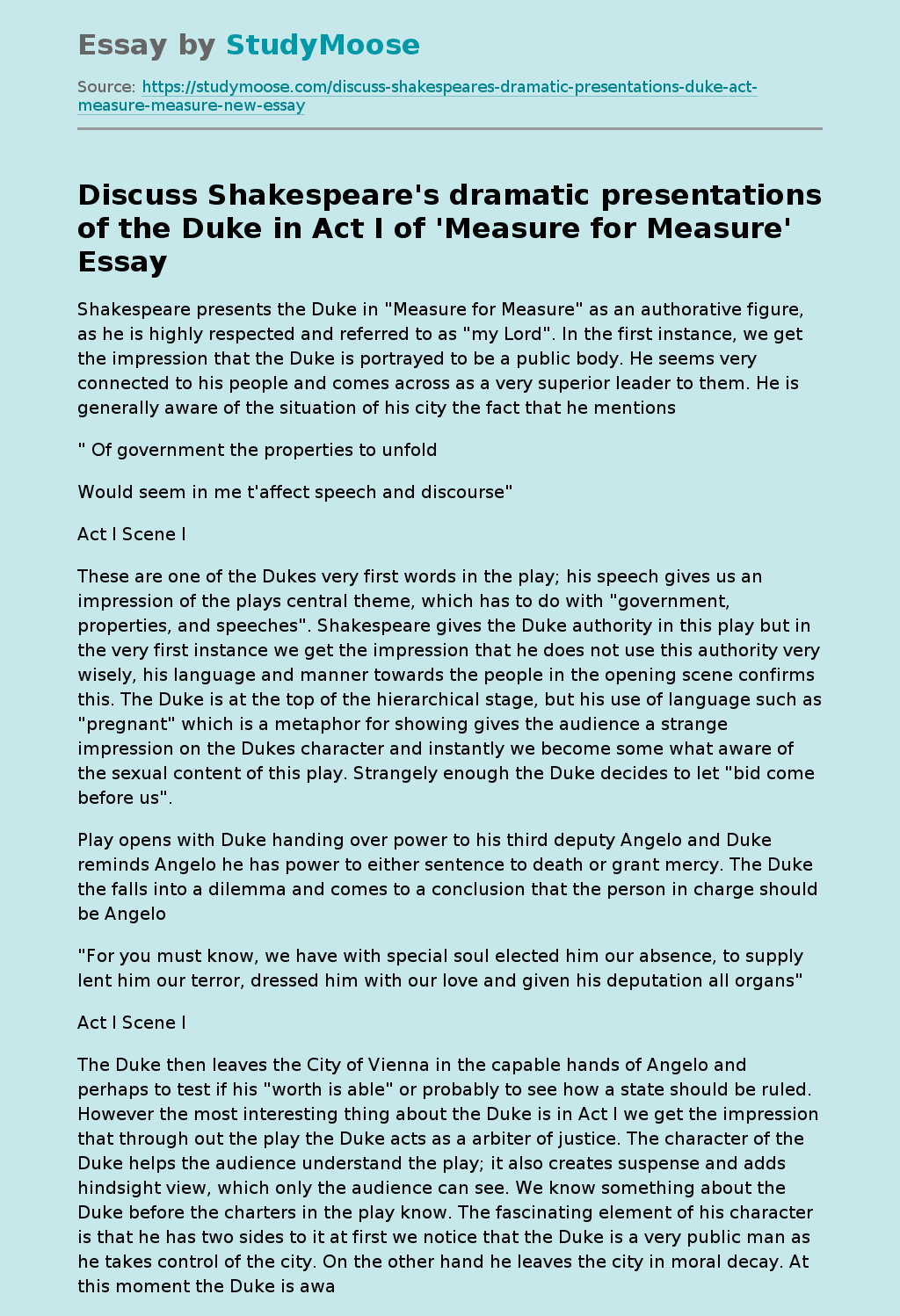