Presentation of Isabella in Measure for Measure

Throughout the Measure For Measure Shakespeare presents Isabella as an innocent victim of male desires and exploitation. However, some may argue that she is a worldly woman who is capable of taking care of herself and not been dependant on others. This essay will discuss these assertions and how far they can be justified by the text of the play and it will show the judgement, which I have made towards Shakespeare’s choice of character.

In his attempt to exploit Isabella, Angelo uses blackmail to get her to sleep with him in return for the rescue of brother from his proposed execution.

Don't use plagiarized sources. Get your custom essay on
“ Presentation of Isabella in Measure for Measure ”
Get custom paper
NEW! smart matching with writer

She does motivate his lust towards her, but does not physically do anything to provoke it, he Angelo admits himself in his soliloquy at the end of act two scene two;

“Nor she nor doth she tempt; but it is I

That, lying by the violet sun,

Do as the carrion does, not as the flower,

In contrast to this, it is suggested that Isabella uses language, which in some cases can sometimes unconsciously be erotically charged and this could be one of the things that Angelo is attracted too.

“…To strip myself to death as to a bed

In act two scene four, Isabella tries to assert herself against Angelo by saying;

Or with an outstretched throat I’ll tell the world

Although, as Angelo continuously uses blackmail to exploit her innocence, she is impotent against it, and as Angelo says, she will not be believed if she speaks out against him

“Who will believe thee, Isabel?

It seems to be the case that a man’s reputation will completely outweigh a woman’s, as Isabella’s reputation must be immaculate too as she was about to become a nun.

In the final act she speaks out against Angelo despite his attempts to dismiss her as insane or in association with Mariana in a plot against him. However, she only does this at the instruction of the Duke, and does seem to become more in thrall to men as the play progresses.

On the other hand, many argue that Isabella is sexually repressed. Her character is the centre of all sexual desires and the plays sexual plot line, attracting both e Angelo and the Duke and getting herself involved in the ‘Bed trick. She is the one that encourages Marianna to take her role in the ‘bed trick’ and sleep with Angelo, subjecting another women to the sexual fate she so fervently defends herself against. Her decision to enter the convent is never explained. By many nuns are stereotypically seen as being sexually repressed women; however, Isabella is a beautiful young women who would presumably have no problems wit getting a husband, and so becoming a nun must have been a choice of her own. Many may argue that Isabella is running away, desiring to escape the problems and pressures of real life, rather than as a considered result of her piety.

As the play begins, Isabella is about to join a nunnery, and clearly has extreme value towards her purity and virginity. She appears to value her innocence above everything;

More than out brother is our chastity” (pg 46)

However, as she says this in one of her soliloquies, she is using formal language in a way that it seems she is speaking to herself not about herself, suggesting it is a statement of belief rather than inner feeling.

The audience can see that she has capabilities of standing up and looking after herself when she enters the nunnery, asking for “more strict constraint” (pg16), which suggests her high, level of morality and self control. Also, when Claudio suggests her great debating skills and how she has the power to argue effectively and assertively, suggesting she has the courage and confidence to be his advocate with Angelo.

When she will play with reason and discourse

Lucio in act one, refers to her as “a thing enskied and ensainted” (pg18), proposing her saint like qualities. Saints can be seen from two different approaches, one that they are views as passive victims, and their innocence is exploited by the evil, sacrificed for their virtue. And secondly, they can be seen as assertive characters that are not afraid to express their views and feelings and live their life according to their beliefs, which many would argue is what Isabella is facing.

She can also be viewed as very cold and unemotional. Lucio states this several times throughout the play; “you are too cold”. This could imply that she is does not require support from others and that she is self contained and holds self-possession and emotional distance. One the other hand it could suggest that she id totally feeble and uncertain of herself.

Isabella’s character is extremely important to the plays plot. Some see her as a victim and some as a woman who can look after herself. I believe that Isabella is in some cases a victim of male desires but yet at other times she is not.

Presentation of Isabella in Measure for Measure. (2020, Jun 02). Retrieved from https://studymoose.com/presentation-isabella-measure-measure-new-essay 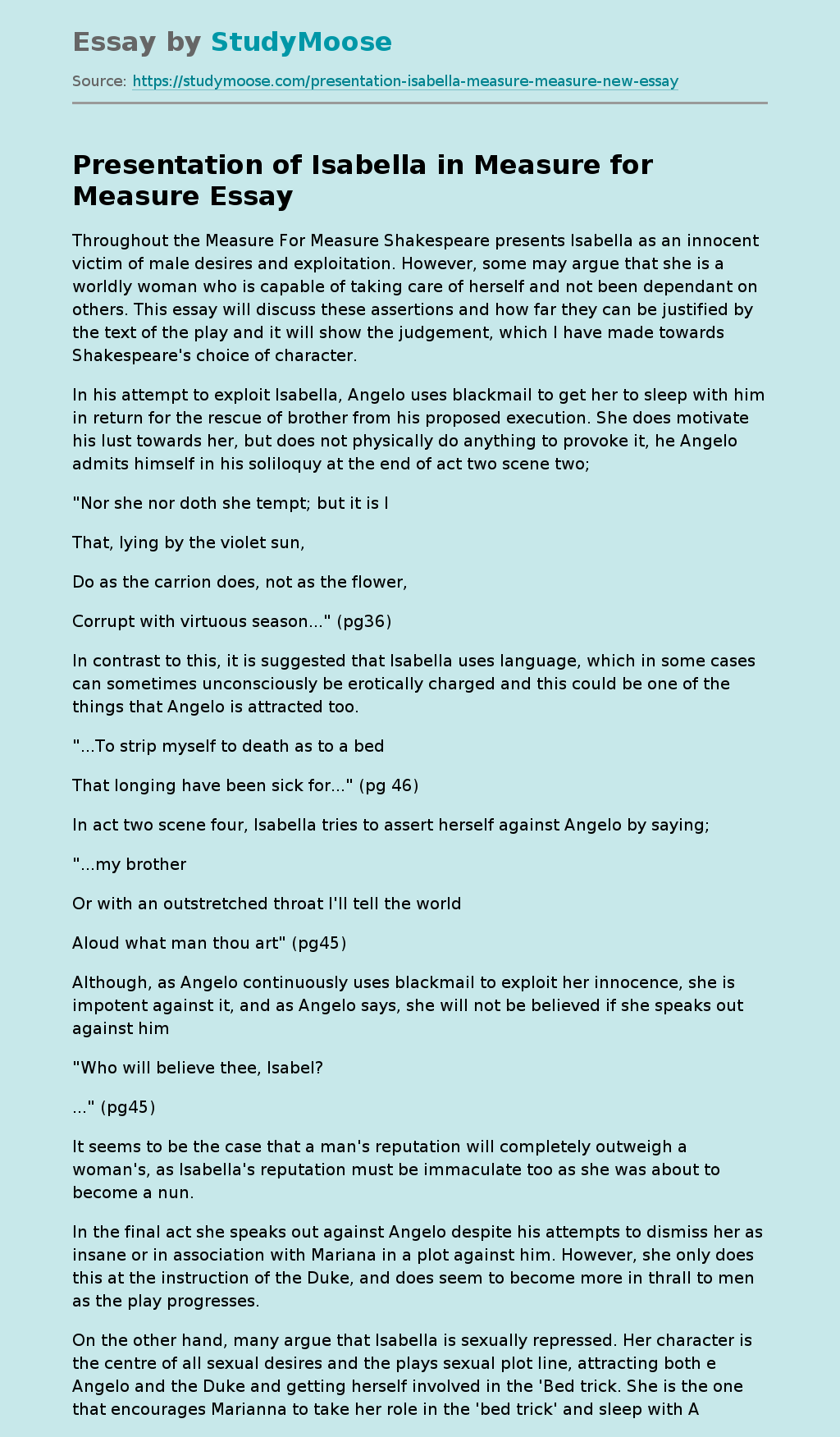