Life taken for the purpose of valor and nobility shows a terrible disparity between actions and reasons. Hollywood, when tackling the issues and conflicts of Vietnam War has the tendency to give more focus on how to show the life of a soldier in reference to their personal relationships. They are sometimes forgetting the crucial portion to discuss the political and social aspect of war. Vietnam War had been featured in some literary works, written and in film, and it is unusual that it had been perceived in a point of view of widows, who seems like the victims of war’s aftermath.

Don't use plagiarized sources. Get your custom essay on
“ Human Rights on Film: Regret to Inform ”
Get custom paper
NEW! smart matching with writer

Widows of Vietnam War, when used in art, tend to create subject of sentimentality but not with Barbara Sonneborn’s award-winning masterpiece, Regret to Inform, which showcases the situations and sufferings of women who had their husbands died in the midst of fires and bullets. The movie describes not just the lives of American women but also paid attention to the same frustrations that Vietnamese soldier’s wives in the extent of the war.

Brief Review On the twentieth anniversary her husband’s death, Barbara decided to meet some war widows to learn more about the war.

She attempted to root the actual nature of this war and analyze its extent of devastation. With this started as a personal quest, Sonneborn had expanded the picture of the war victim’s situations as she set foot on the land where Jeff died. This journey deepened her as she said (PBS 2010).

This movie anticipated long time peace by sharing the views of isolated set of people involved in Vietnam War. It serves as a challenge for those who wish to realize the actual scenarios when war was waged.

Regret to Inform is not created for the awareness of the public but for the purpose of inspiring the more humane side of every human who are doubtlessly sharing the same value for love and peace. This is a love story telling how deep love for country, love for humanity and camaraderie despite of the origin, race and disparity can be grouped and be transcended. It tells the story of victims of the real enemy of mankind which is the irrationality in our reactions and decisions.

From the Character’s Viewpoint Giving equal attention on widows of soldiers on both sides, western and Asian, the movie exuded profoundly the moving story about the aftermath of war in a straightforward manner as observed through feminine eyes. Sonneborn shares the post war predicaments with her companion, Xuan Ngoc Nguyen, another widow of the war and also followed the lives of some soldiers who were at war. It transcends the boundaries given that the same conflict brought these victim’s lost – the War. On one of the scenes there, a Vietnamese widow couldn’t believe that an American wanted to listen to the stories they had regarding the war.

The war created horror which is inevitable for those people who are in the midst of it. But, the worst thing that it created is its extension right after the war is over. During the war, one of the actions taken by the US military is the application of chemical known as Agent Orange which aims to oppress their enemies in the forest. Some civilians had been affected by this move and their widows could do nothing but to express the sentiments regarding this unfair causality. As they say about the situation, it is either you are dead or you are not safe.

Apparently, among them, no one will ever forget the hardship they had in order to survive that non-stop battle. The film shows no evil character as usually being used to portray Viet Nam. It is more than just identifying who’s right or wrong but apparently, the victims didn’t just concentrate in one side. Viet Nam, as the setting of the war didn’t carry the weight of all the war’s burden. It is just a location where the real enemy lies. The enemy here is neither a person nor a battalion of soldiers but the collective actions of misunderstanding, lack of diplomacy, violence resulting to death of children, women and men alike.

The war is in Vietnam but its terror could have surpassed the oceans. When you are relying on media to hold on to the situation, what could we expect to happen? American women had the discomfort of being uncertain by feeling like anytime, they will be receiving bad news despite the fact that the war remained far from them. This uncertainty can make a woman walk thru life in a routine based pace without a grasp on what is going to the interviews part. It managed create the heart trembling spirit of each stories told.

The interview part supplied some highlights in the movie. Good questions were given in the movie providing the most. These questions provoke unbiased reasoning of the people involved and managed to remove being self fulfilling in dwelling with the depression of those being interviewed. They questioned the righteousness versus faults such as when they are trying to ask whether a soldier can be considered a murderer or a hero. Sonneborn was able to use her skill as a visual artist as she was able to apply the sustained touch of great picture quality throughout the film.

The feminine voice of the documentary’s narration serves as the perfect tool to bring out the right essence of the stories given. In fact, it is not the story which served the framework of the movie but the desire of Sonneborn to see the real picture of war and expanded as she tried to achieve it. Cultural Implications to the Human Rights Issues Views against each race differ relatively. Western people viewed Vietnam as a place for war, for violence and as a country of widow maker while Vietnamese people saw Americans and they saw oppression.

Wars are being brought by differences in ideologies and poor application of international and civil policy. Culture should never violate anyone’s right to have protection from harm and being hurt, thus, we need to strive for total eradication of all unnecessary risks that may result to serious health consequences. Cruelty and inhumane practices such as waging war and counter offensive actions applied on physical integrity has no space in an ideal society between men and women regardless of the belief and ethnicity of a foreign class.

If there is any way that this will be contradicting to a belief or a practice, it would not show lack of respect in customs and traditions because as a culture, all actions in a community contribute to its enrichment and should always to be perceived as evolving variable that defines an individual or a group. All collective actions of people in group made the culture established and there is no way that it can be destroyed but can only change to adopt in better situation in their immediate community. It only goes towards the direction of better conditions.

All people in the world who has participations in war must serve as variable in making analysis thru discovering patterns of its occurrence. In this kind of issue and conflict, social planning requires sensitivity to all differences while achieving the goal of greater good in a way that luxurious peace can be very much affordable. Intellect and Emotion It was thought that the ability of an artwork to be appreciated and affect the heart relies on the ability of the craftsman to portray life as it is with the application of all his or her intellect and mastery of the craft.

Barbara Sonneborn proved this ability as she created a well crafted piece and touch people around the world. There is a very thin line between being great and sentimental and no doubt that this masterpiece is a great one. Like in Michelangelo’s sculpture ‘Pieta’, which has the Madonna figure carrying Jesus with no tears, it doesn’t require such object to show the strength of the grasp of the artist in the reality. It is not all crying. It should be humane enough to capture humanistic side of any person. The movie is intrusive in the sense that it will show you a brand new perspective in the stereotyped subject.

It pioneered new ideology regarding not just the Vietnam War but the war itself as a concept. The whole movie is coherent and let you hold until the end and this quality was sustained by the creator. This movies’ intellect is a challenge for the eager young filmmakers who wanted to create sociopolitical movies. The Issues and Conflicts Sonneborn married again and had been happy but her desire to accomplish her goal of identifying the entire relations of war as a social concept to her husband’s death suggests that there is something deeper than the lost of Jeff.

She deserves to resolve the agonies that are situated in all war settings. This is the only way that a conclusion can be drawn in response to the issues and conflicts of her fellows who lost their husband in parallel to valor for the nation. What are the issues, then, of these women across the globe after losing their husbands? The answer is socially and politically related to personal frustrations. The pain and anguish of war continued to haunt these women as the situations in the past pushed them to cross boundaries to sustain their life such as, in the case of Xuan Ngoc Nguyen, who also became a prostitute to survive.

Conclusion Whatever happened in the past cannot be undone and reversed but the ability not to let it happen again is one of the most admired ability of the people today. That is what the movie had shown to the public and thus, making us felt more sorry. It made the audiences feel more responsible in making decisions as a group for its extent is countless and immeasurable. The movie has a personal purpose of learning social ideas and tends to track social frameworks that are resulting to unwanted public situations.

Women, for example, are not intended to participate to war but its doom were not just to punish the men who were there but will also bring tears to those who are left at home, minding the babies, minding the chores, and minding all the worries of uncertainty while holding on no assurance of having their loved one’s back. For this to be achieved, Sonneborn applied the right skill of film making guided by her intuition to know the truth behind the sorrows of all women victimized by war. 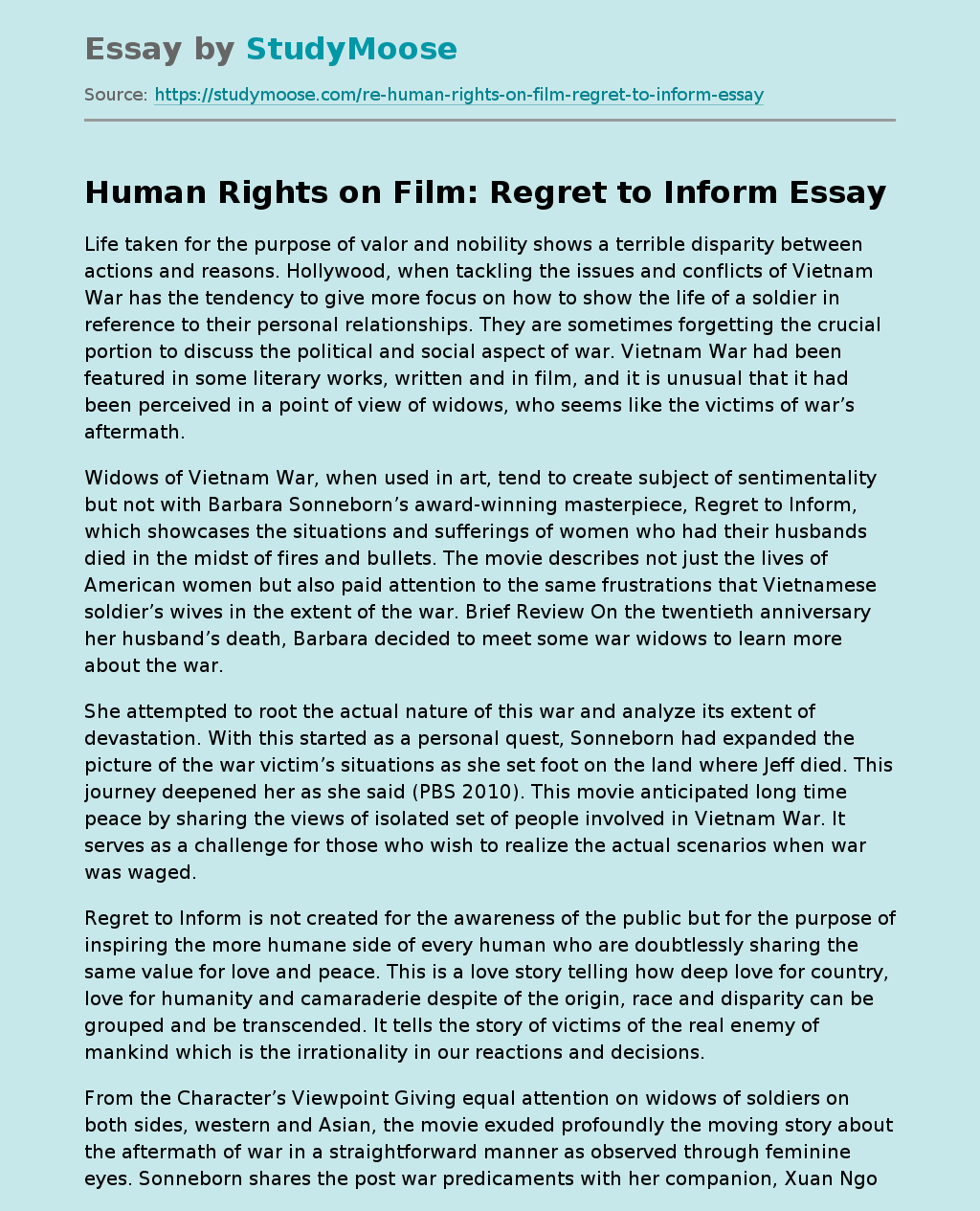