The tittle of the short story regret by Kate Chopin presents a fifty- year old Mamzelle Aurelie who unmarried women. She has never had a man and lives alone on her farm with some animals and Negroes working with her. One day, her nearest neighbor, Odile brought her four children to her house and left them in Mamzelle Aurelie’s care because of a dangerous illness of her mother. This is why Mamzelle Aurelie, who has never ever has children before has to keep them.

Don't use plagiarized sources. Get your custom essay on
“ Regret By Kate Chopin English Literature ”
Get custom paper
NEW! smart matching with writer

For the next two weeks, Mamzelle Aurelie had to learn to care for the children and be accustomed to their presence and noises. At the end of two weeks, Odlie came back and released Mamzelle Aurelie from her responsibility, but Mamzelle Aurelie felt the loneliness in the absence of the four children, and she cried “like a man, not even noticing her dog liciking her hand.

In “regret’ by Kate Chopin the type of story that the author use is textually explicit.

In Kate Chopin “Regret” the theme that the author wants to tell the reader is regret which is the title of this story. In this story we can see that Mamzelle Aurélie life was quite alone in the world without her family. At the beginning, she never regret with her choice of not marrying. She was happy with her life that she had. But her feeling was changes when one day her neighbor given her children to Mamzelle Aurélie for her care.

From there, Mamzelle Aurélie began to truly life. When with the children, she can feel all the joy of life. But after two weeks, the children had left with her mother. Mamzelle Aurélie was cried like a man. It show that her feeling of regret because she only can know about love and joy instinct a motherhood when she at fifty years old.

From the story, there are many style of the language that author used to create an effect in this story. At the beginning, the author chooses phrases and words to describe the Mamzelle Aurelie in masculine appearences. She has “a good strong figure, ruddy cheeks” and “a determind eye” ( pg 1, line 2). She wears “a man’s hat, “a blue army overcoat” and even sometimes “top-boots”. Other than that to describe Mamzelle Aurelie is at least middle-aged because she has “hair that was changing from brown to gray” ( pg 1, line 2 ).

The author also used a simile to give an appreciation for beautiful or effective of language. This can be proof in text “When she ordered them one and all to bed as she would have shooed the chickens into the hen-house” ( pg 2, line 14 ). At this time she doesn’t know how to treat the children. The others are simile of one the children’s “warm breath beating against her cheek like the fanning of a bird’s wing” ( pg 3, line 2 ). This has the effect feeling the old woman emotions.

Futhermore, the metaphor are used in these story to compared the children with animals”. When mamzelle Aurelie thought that her responsibility was just o feed the children, she found out that “little children are not little pigs” ( pg 2, line 3 )and needed attention from her unlike pig do. In the final paragraph, “evening shadows were creeping and deeping around her solitary figure” ( pg 3, line 22 ), signifying that she was nearing the late part of her life and she was all alone.

On the other hand, the author also use many dialogues is probably some kind of old slang that difficult to understand. Proof of this can be found in the text when Odile ask for help to take care of her children “I would n botha you with `em if it was any itha way to do! Make `em mine you ( pg 1,line 21 ). Other than that when Mamzelle spoke with aunt Ruby “me, I’d rather manage a dozen plantation than fo’ chil’ren. It’s terrassent! Bonte’! Don’t’t tal to me about chil’ren!” ( pg 2, line 23 ),the language used in the dialogues is probably some kind of old slang.

Conflict was beginning when Mamzelle Aurélie neighbor left her children for her care. At the first time she become motherhood, she dislike to take care of the children. But after a few days, she had learned to care the children and familiar with the children acts.

The climate had began when she feel joy her life with the children. But after two week her neighbor, Odile was comes back and took her child with her. At this time, Mamzelle Aurélie began her feel of joy was gone.

The ending of this story the author writes about Mamzelle Aurélie feeling. Mamzelle Aurélie was so regret with her life. This is because she began to realize with truly life when she was motherhood. She became loneliness again when the children left her and she was regret when she thinking about her life before this.

The author begins the story with a portrait of Mamzelle Aurelie to describe she has many masculine appearance and her character which there is no feminity in her description. She also unmarried woman who runs an entire farm and lives on her farm with her animals, her dog call Ponto and the negroes who lived in her cabins and worked her crops. This shows how her life had revolved mainly with animals, influencing the way she treated the children when she suddenly given the responsibility of caring for a neighbor’s small children. At first she tries to deal with the children almost as if they were another variety of farm animal. Thus, when they arrive, she determined ” a line of action which should be identical with a line of duty” (pg 1, line 34 ).

The arrival of Odile children, was changed Mamzelle Aurelie character. At the beginning she has a great problem to manage those children. Now she must face them with more feminie aspects of herself as she transforms from military officer to motherhood. She slowly works to change over in the women. Caring for the children requires that she awaken the feminie aspects of her nature that had been dormant. Therefore she brings out her white aprons and “got down her sewing-basket, which she seldom used” (pg 2,line 35 )to mend the children’s clothes. She also washes their feet before bed, tells them stories and even lets the youngest sleep with her. But after the children go back to her mother she becomes very sad and starts crying. Then she realized that she had regretted that she has made the wrong choices in her life.

Loving, soft, warm hearted, beautiful are characteristics portraying by a women or as a wife. Unfortunately Mamzelle Aurélie has an opposite character like a normal woman. In this story of ‘regret’ Mamzelle Aurélie realize that her life is lacks something that will give happiness, loving and caring for the children.

The author emphasize on the disadvantage of low in knowledge and education for the women. At the beginning of the story when Mamzelle Aurélie without undoubting she declined the proposal when someone need her as a wife and do not realize the future mistake that she will go through without feel regret.

Experience to raising child is unfamiliar with Mamzelle Aurélie, she treat Odile child like a military. She spoken in a loud voice and commanding until make Marcelette cry. Meanwhile at the night “she order them one and all to bed as she would have shooed the chicken into the hen-house” (pg 11, line 1).

The contrasting symbols from the story show the changes that have occur on feeling and attitude of Mamzelle Aurélie when the four children of Odile leave in two week on her house. At the beginning “she wore a man’s hat about the farm, and an old blue army overcoat and sometimes topboots” moreover she changes it into maternal role like “she wear white aprons that she not worn for year” (pg 15, line 1) and “she got down her sewing-basket” (pg 15, line 3). After a short time, she also enjoy with the laughing, crying and echo of the children voice in the house. The time of the children coming and out from the house, is also symbolic. Firstly the white sunlight was beating, “some chickens were scratching in the grass” and “there was a pleasant odor of pinks in the air” but at the end of the story the environment become darken, the red sunset, the blue-gray purple mist and purple mist across the road.

The sadness when the children back to their house is also symbolic, the excitement and happiness for baby-sit for two week give very regret feeling to the Mamzelle Aurélie when she declined the proposal at the young age.

The presence of the children in Mamzelle Aurélie house gives an effect to her. Odile’s children awaken her maternal instinct. Mamzelle Aurélie is an independence and unmarried woman. When she get responsibility from Odile, it like that the fate want to show to her that she does a wrong decision when declined the proposal and how loneliness of her life. She very happy with the presence of the child but when her mother come back to take the children, she realized her mistake and regret about her past life.

For the conclusion, the short story “Regret” by Kate Chopin was very interesting story. There are a lot of lesson that we can get by reading this story. Futhermore, when we read this story, we can get the main idea that the author wants to show us in “regret”. 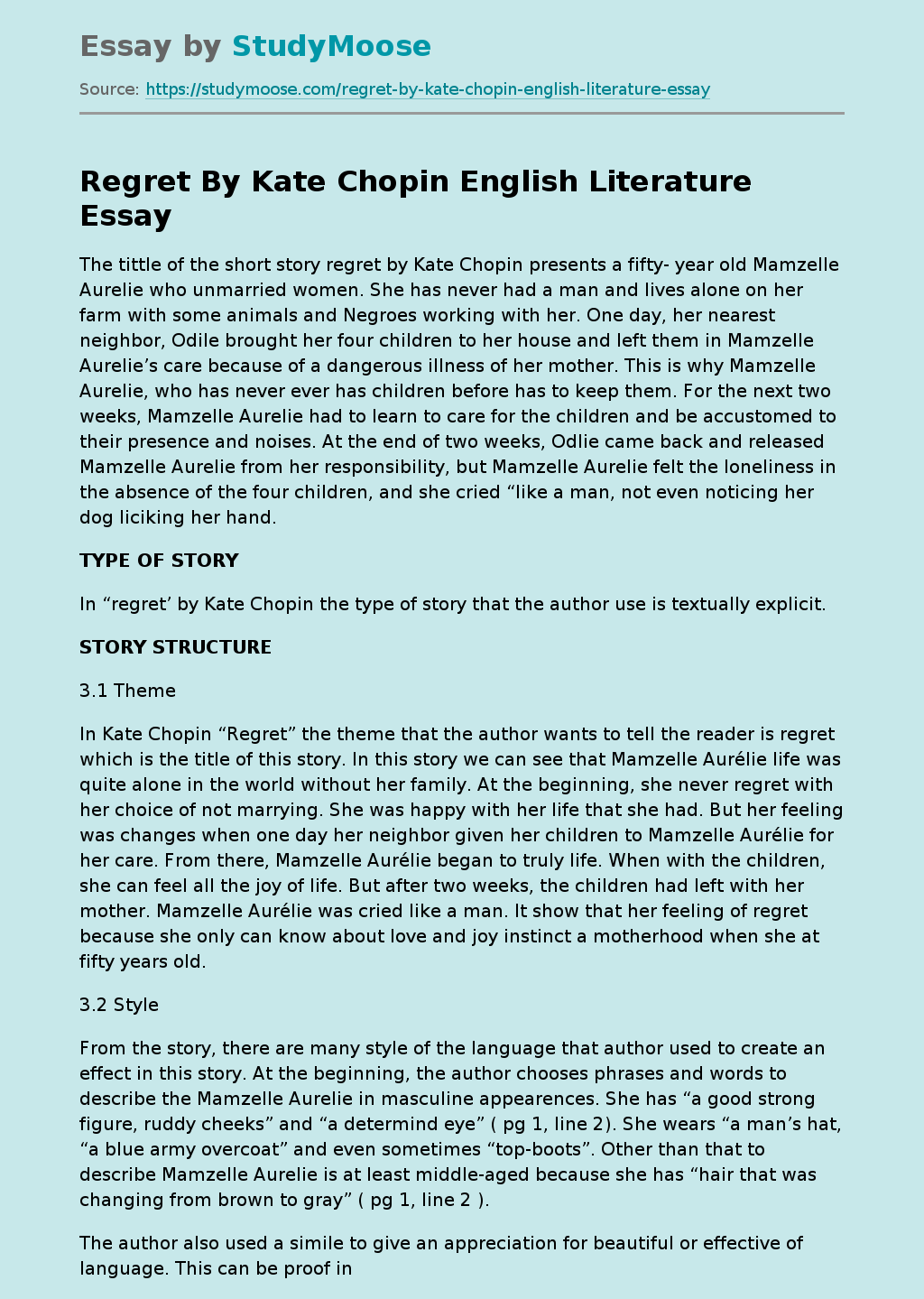