The 1960’s was a time that racial segregation was at its peak. Particularly in the United States Of America where the “negro” society was treated with utter injustice. The movie 1988 movie Mississippi Burning directed by Alan Parker, shows life in a small Mississippi county called Jessup. Three civil rights workers are reported missing, one of them being of African descent. F.B.I agents Rupert Anderson and Allen Ward are an un-wanted force that is sent in to deal with the issue.

Don't use plagiarized sources. Get your custom essay on
“ Racism Issues in a Movie Mississippi Burning ”
Get custom paper
NEW! smart matching with writer

The movie interprets themes such as racism and power through viscious language, camera angles and brutal detail. The film is set in a small Mississippi County called Jessup. This is a place where not only the characters are tough but so are the people. Characters such as Deputy Pell and Sheriff Stuckey are used to show what it is like living there and how tough and stubborn people can be. Parker presents a town full of racial segregation and this is shown when Anderson and Ward go to the local diner for lunch.

Upon arrival they are greeted by a white waitress who tells them the diner is full however, she invites them to wait for a seat. In this restaurant there is a section for white people and there is a section for Negro people. In the Negro section of the restaurant there are plenty of free seats and Ward decides to sit there and try and discuss the issues with a Negro person. The entire diner is silenced by Wards bold move.

Through this scene Parker shows us how difficult is is for a negro person in a small country town and the racial cruelty that they experience. The setting of the movie is very important as this is something that could be prevented in a small city due to harsher laws. However, tougher characters live in these small towns and the law is not always abided. Parker explores many themes throughout the movie and many of these themes are portrayed through a character. The theme of racism is portraued particularly through Sheriff Stuckey who also represents the corruption in the law of Jessup County Mississippi.

The law is not always fair and the power that Sheriff Stuckey upholds in the community is why he can abuse the law in so many ways. Sheriff Stuckey is shown in the opening scenes of the film when Ward and Anderson arrive for the very first time. He enters the camera shot chewing tobacco and refers to the missing persons issue as a “Nigger Problem” this shows that first and foremost he is racist and has a strong disregard for the issues within Jessup County. Parker shows Sheriff Stuckey as the typical stereotype of a sheriff. He is a large man, chewing tobacco which is characteristic of a southern American man. Jessup being such a small town only has Sheriff Stuckey to answer to and he therefore upholds all power.

Throughout the film Sheriff Stuckey does not play such a large role as he allows others that work under him to perform all the work and therefore he cannot get in trouble. Through this character we are constantly viewing how corrupt the law is in Jessup County. Rupert Anderson is played by Gene Hackman in the film and represents a strong F.B.I agent who is a southern country man at heart. He presents very different views to his partner Mr Ward and shows a better understanding of what southern Americans are like. Ward and Anderson have very different views on how to solve the issue in Jessup County. Anderson believes in trying to work with the people and gaining as much information as he can, whereas Ward has stronger ways of solving crime which is where conflict incurs. Unlike Sheriff Stuckey, Ward shows the right side of the law. The non-corrupt and non-racist aspect of it. Anderson creates a close bond with Mrs Pell who is the wife of Sheriff Stuckey’s deputy, Clinton Pell. Mr Pell is a high suspect in the missing persons case and he originally tries to gain as much information as he possibly can from her.

By creating a friendship with Mrs Pell the viewer is shown other aspects of life in Jessup Country. Such as the difficulties that Mrs Pell is faced with due to who she married and the secrets that she must keep in order to keep her husband safe from the law. Anderson’s original “friendship” with Mrs Pell results in them sharing a kiss and further drama. Through the character of Anderson, Parker shows the viewer what it is like trying to solve a crime like this with all odds against you and creates an element of suspense through the secret love story. The movie Mississippi Burning shows the difficulties that a Negro person must face through its characters and setting. Corruption of the law is portrayed and so are powerful characters. Through the personalities of characters themes are explored and the viewer is shown how difficult it is for a negro person to live in a good and just society. 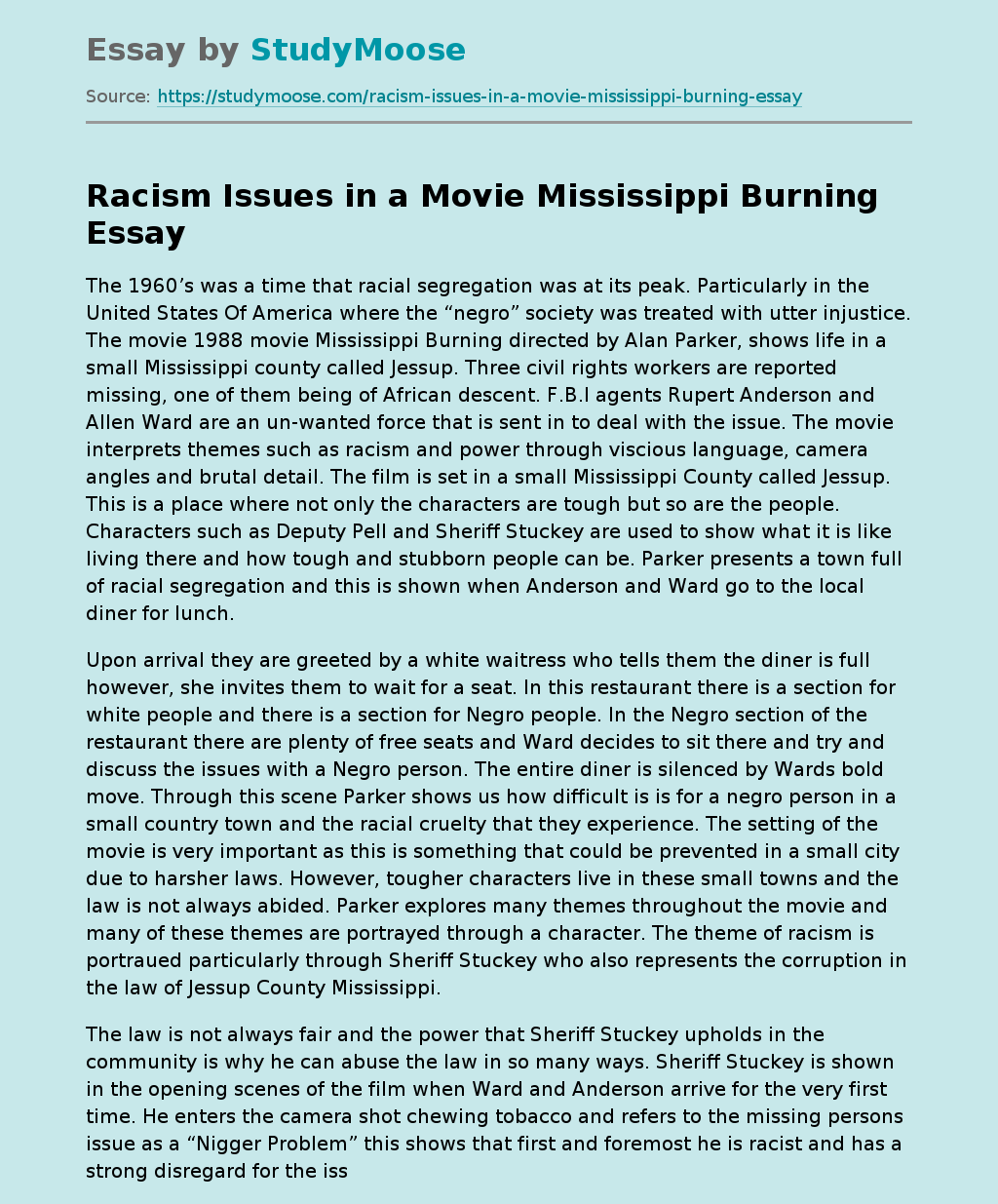