Racism is an Unresolved Problem

Racism is the thoughts, beliefs, convictions, and behaviors that raise the value of a particular group or a particular group at the expense of other groups, based on inherited matters related to people’s abilities, character, or customs, and sometimes depend on skin color, culture, place of residence, or customs, or language, or beliefs. It can also give the right to a group that has been raised to control other groups in their fate and being, and to deprive them of their rights and disdain without a right or clear reason.

Don't use plagiarized sources. Get your custom essay on
“ Racism is an Unresolved Problem ”
Get custom paper
NEW! smart matching with writer

The three rhetorical analysis help convincing the audience of the quality of the speech. In ‘How we can make racism a solvable problemand improve policing’ Philip Goff sheds light on the racial abuse that led to racism, and the effort he makes to make this problem a solvable problem.

Credibility is an easy way to reach any kind of audience. The use of confusing words that have more than one meaning contradict the principles of credibility, because it leads to placing the public or the audience in a controversial position.

Credibility means integrity and reliability. One of the smartest ways that can catches the audience’s attention, is by showing them how much you know about the topic that will be discussed or highlighted. This happens, when the speaker introduces him/herself. Philip Goff introduced himself to his audience and told them that he is a scientist ‘who studies how our minds learn to associate blackness and crime and misperceive black children as older than they actually are.

’ He also works in a Center Policy Equity. A Center for Police Equity ‘Center for Policing Equity’s work continues to simultaneously aid police departments to realize their own equity goals as well as advance the scientific understanding of issues of equity within organizations and policing.’

Intelligence lies in being able to intensify people’s feelings. It has become very clear that thinking is not anymore limited to the mind only, but rather includes the heart with which and on its bases, we make our final decisions. Heart or emotions are the target part of audience to gain their sympathy and their support. The speakers make efforts in choosing the most influential words and most emotional. It was not hard for Goff to get his audience’s support and sympathy. He used powerful and emotional words that can do the job and help him influence and convince his audience. He started by asserting that racism is an important issue and needs to be solved. He explains that, although almost everybody knows how much immoral, unjust, and ignorant racism is, still people use it for different reasons, and those people realize that it must be stopped, but they in the same time know that it is impossible to stop racism ‘the way trying to fix racism usually feels necessary and impossible.’

Not only that, he clarified that racism is a deadly problem from the beginning. It leads people to kill others and themselves too. What do you know about logic? Logic is what makes everything easily understandable and acceptable and far away from myth. The logical appeal in this video was obvious. He mentioned many statistics that supported his points of view and supported his topic that he was talking about. He said that ‘every year about one in five adults in the United States has contact with law enforcement’ and ‘out of those, about a million are targeted for police use of force’ and ‘ if you were black, you are two to four times more likely to be targeted for that force than if you were white.’

What is meant, is that the statistics can be higher when it is about racism. These high numbers indicate that high actions of racism lead to higher and higher numbers. In another interesting point, he says ‘racism is about behaviors not feelings’ showing a live examples of the leaders of the civil rights movements -such as King and Lou Hamer- they used the language of love to fight racism, and to him it was wrong because ‘it is actions over feelings’ feelings will not change any thing but the right actions in the right times.

It all comes down to this. Racism is a universal problem and controversial in the same time. Through history, leaders and activists played major roles to change it and stop it. Scientists and experts also, made and still making efforts to show that racism is a useless solution, and that it is not a solution at all. Phillip Goff used the three Rhetorical Appeals and were well applied in his speech. It gave full meaning of his ideas and taught us as listeners that only actions can stop something such as racism.

Racism is an Unresolved Problem. (2020, May 16). Retrieved from http://studymoose.com/racism-is-an-unresolved-problem-essay 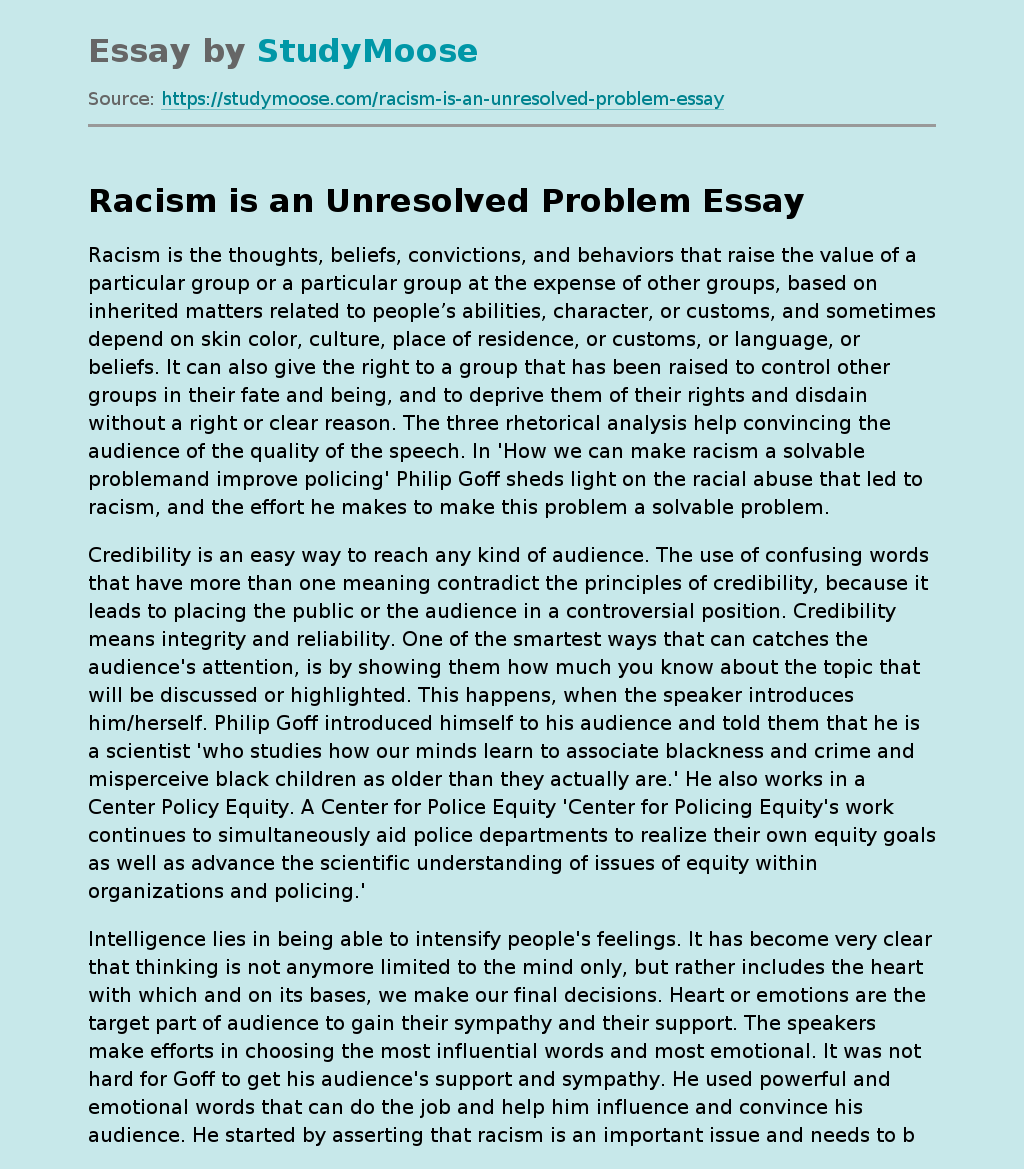