“Racial passing” or “passing” was initially invented to define the experience of biracial individuals who was taken as a member of another racial group. Although racial passing dates back to the 18th century, the term did not surface in the American vocabulary until around the 19th century. Mark Twain and Charles Chesnutt were the first American authors to explore racial fluidity, but it was not until Nella Larson’s 1929 novel Passing to use that term. Passing has been the subject of biographies, stories, articles, and movies.

Don't use plagiarized sources. Get your custom essay on
“ “Racial passing” or “passing” was initially invented to define the experience of ”
Get custom paper
NEW! smart matching with writer

The use of passing reached its peak during the Jim Crow era. African Americans during the Jim Crow era, passing as white involved walking away from relatives, friends, and community. Historians think of passing as a tool for minorities to obtain an education, become employed and gain the freedom that was not available to members of the black community. In 1954, Brown v. Board of Education was a historical landmark court case that happened during the civil rights movement and helped prove that separate but equal education and was not equal at all.

However, before Brown v. Board of Education, several of the first African American students in high school and college were quietly desegregated long before the school was open to non-white students. For example, Anita Hemmings was the first passing African-American person to receive a degree from Vassar College in 1897. Weeks before her graduation, her roommate identified her African American race and Hemmings was almost kicked out of Vassar. After she graduated, she returned to Boston, Massachusetts to work at the Boston Public Library as a librarian.

In 1903, she married Andrew Love, a doctor who was also passing for white. The two chose to maintain their lives as white, because of the institutional discrimination they received as black. Years after the Brown v. Board of Education court case, African American people still face discrimination and racism. In 2017, The U.S. Department of Education received 675 accusations of racial harassment. To avoid discrimination, some people chose to pass as a different racial identity in the workplace. Light-skinned African Americans who resorted to passing, willfully concealed their African family to become employed by changing to Caucasian but also as Latino, Native American, and Asian. For example, Albert Johnston grew up in Chicago, attended the University of Chicago Medical School in the 1920s, and become a radiologist in New Hampshire. When the United States joined World War II, Johnston “outed” himself by applying for the United States Navy. He was denied because of his racial past, and word of his mixed-race spread. When the community found out about his hidden race, he was fired from the hospital. Another example is Anatole Broyard who was born of Creole descent and preferred to hide his black ancestry in order to become a New York Times book critic in Brooklyn, NY. Broyard’s daughter, Bliss Broyard, wrote a biography about her father’s choice to pass, “One Drop: My Father’s Hidden Life-A Story of Race and Family Secrets” Some of the earliest claims of racial passing came from descendants of biracial slaves attempting to escape from slavery. Biracial children were often fathered by their white slave masters, which led to their fair skin and similarity to other white children. Considering biracial people white would have raised the number of free men and women but did little to give the nation the financial boost that free labor did. Ellen Craft’s was the daughter of a biracial slave and her white master, Major James Smith, and was eventually assigned to the master’s daughter, Eliza Smith, to relieve her from the household and her half-siblings. She moved to Macon, Georgia to become Eliza’s house slave. It was there she met William Craft, an enslaved carpenter that she would marry in 1846. The two began secretly plotting their escape in 1848. Ellen cut off her hair and wore men’s clothing purchased by William using his money from his carpentry job. William pretended to be her slave as the two caught a train and boat to the North.Opposing views would ask if passing is still useful today because racial segregation is no longer a law in the United States, people of color do not face the same obstacles that historically led them to pass in search of better opportunities. For example, Texas required that every train have one car where all people of color had to remain. A black person could never shake hands with a white person because it indicated being socially equal. White drivers always had the right-of-way at all intersections. Whites did not use courtesy titles of respect when referring to blacks, for example, Mr., Mrs., Miss., Sir, or Ma’am. On the other hand, blacks had to use courtesy titles when talking to whites and were not permitted to call them by their first names. It is also argued that since the abolishment of the Jim Crow Laws, laws that required racial segregation in the South between the end of Reconstruction and the beginning of the civil rights movement, African American people have received benefits and opportunities that white people have not. One cannot deny that African Americans now does not experience the same level of racial discrimination that African American did in the 18s and early 19s. However, according to a 2018 NBC News poll, 64 percent of people said racism remains a significant problem in our community. In 2018, calling the police on African Americans for normal things has increased. For example, three black Airbnb guests in Southern California were detained after a white neighbor called the police. A white Yale University student called the police when she found a black student napping in the common room of their dorm building. Also, in May, a video of a white woman who called the police on a black family barbecuing in Oakland, California. Black students are suspended at three times the rate of white students. African American people have endorsed racial discrimination in every aspect of their lives from walking down the street to buying groceries at a local store.The benefit of education, employment, and freedom are a few of the main reason biracial individuals choose to pass as another race. In 2018, African Americans of all shades still face an extensive amount of discrimination in our schools, our workplace, and in our communities. Even with the risk of walking away from relatives, friends, and community, passing is a very effective way to avoid the chance of losing out on a prosperous future due to racial discrimination. The Jim Crow era is also another reason that people of African descent felt there was no reason to get out of the unhealthy lifestyle that African Americans dealt with on a daily.

"Racial passing" or "passing" was initially invented to define the experience of. (2019, Aug 20). Retrieved from https://studymoose.com/racial-passing-or-passing-was-initially-invented-to-define-the-experience-of-essay 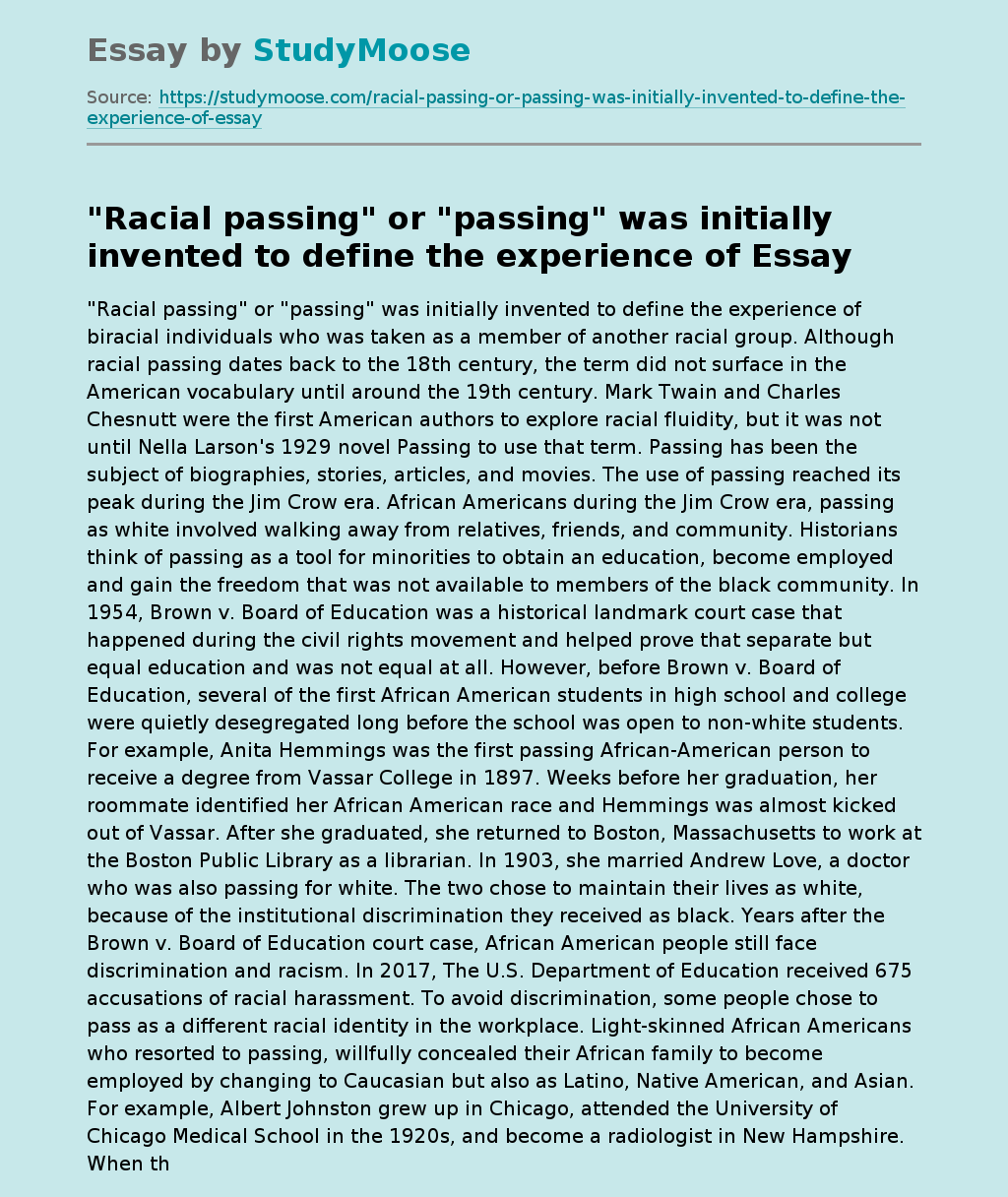