Racial Injustice In To Kill A Mockingbird

To Kill a Mockingbird, by Nelle Harper Lee, was written in 1960. During the 1960’s great movements towards equality and integration were taking place, there was great social injustice towards African-Americans. This was Lee’s entire plot of the book he wanted to show how even when all evidence proofed a black man innocent when his word is faced the that of a white person or person of the privileged society, he will be found guilty. In To Kill a Mockingbird Lee wrote about a black man named Tom Robinson, who has been accused of raping a very poor white girl named Mayella Ewell, when in all actuality he did nothing but help her out.

Don't use plagiarized sources. Get your custom essay on
“ Racial Injustice In To Kill A Mockingbird ”
Get custom paper
NEW! smart matching with writer

She made sexual advances towards him, and as he rejected Mayella’s father walked in and became outraged and began to beat her, scared half to death Tom ran, and later was wrongly accused, then convicted.

This makes me ask, Can justice ever be colorblind? Being colorblind is not recognizing racial or class distinctions, this is an important part of finding true justice.

Justice is the upholding of what is just, especially fair treatment and due reward in accordance with honor, standards, or law. People cannot be treated fairly when they are being judged by a bias society, especially when the bias is against them. People often relate with people with similar backgrounds, to the jury the Ewells had the most similar so it was only natural that they would be looked at as being truthful.

‘First of all,’ he said, ‘If you can learn a simple trick, Scout, you’ll get along a lot better with all kinds of folks.

You never really understand a person until you consider things from his point of view-‘ ‘Sir?’ ‘-until you climb into his skin and walk around in it.'” Page 30. There Atticus was telling Scout the importance of being well rounded and learning about everyone, basically walking in there shows before you can fairly judge them.

I don’t think Atticus could have put it any better, if people would just take the initiative to see things in the eyes of others before judging them it would make the judicial process a lot more fair. Although as a collective group of human beings, blacks and whites are more similar than different. We all have to look at the differences we have, that are placed on us by society and try to draw parallels. Once we find a parallel with these different groups we begin to stop looking at them as being a certain color and begin to look at them as being our equals or neighbors.

When you really don’t know a group of people and all you do is hear stories about them, you allow that to shape your image of them. Such as Scout did with Boo, she had never seen him she was only told stories about and she still was terrified of him.

‘Boo Radly. You were so busy looking at the fire you didn’t know it when he put the blanket around you.’ My stomach turned to water and I nearly threw up when Jem held out the blanket and crept toward me. ‘He sneaked out of the house-turn ’round-sneaked up, an’ went like this!'” Page 72. She didn’t even know Boo all she did was heard stories, as a human she allowed the stories to shape a visual image for her. She saw Boo as a scary and inhuman, only because she didn’t know him, just like the people who held Tom on trail didn’t know him all they knew is stories about him and other black people so when they saw him on trail they saw him as another “˜Boo’. And, they judged him on the stories they hears about blacks not the validity of his suit.

“Mr. Ewell wrote on the back of the envelope and looked up complacently to see Judge Taylor looking at him as if he were some fragrant gardenia in full bloom on the witness stand , to see Mr. Gilmer half-sitting, half standing at his table. The jury was watching him, one man leaning over with his hands over the railing.

‘You’re left handed Mr. Ewell,’ said Judge Taylor.” Page 177. Mr. Ewell was a white man, he was also proven to be left handed in the heated court trail, this didn’t make any sense at first until it was proven that Mayella was beating by a left handed man, and Tom couldn’t use his left hand. Yet they did manage to find him guilty simply because they couldn’t relate to him because he was a black man he was the “˜Boo’.

In the movie A Time To Kill, justice also isn’t blind. In the movie Samuel L. Jackson’s daughter was raped by two white men, knowing that the men would get off if taken to trail Samuel took justice into his own hands and killed the both of them. If he hadn’t of killed the two man most likely they would have gotten off free, because they were in the deep south and blacks were looked at as less than human. If it hadn’t of been for his lawyer he might have gotten the chair, but his lawyer made sure everyone saw his murders as being an act of justice. All the jurors were made to think like a father who’s pride and joy had been raped, and once they did this they did begin to see him as a person.

That doesn’t mean that the justice was blind to his color because had it been a white girl in the first place none of this would had happened, justice would have prevailed the first time, and he wouldn’t of had to take matters into his own hands. In both the movie and the novel the truth was there to be seen my the judging party, the parities just had to look past the color boundaries and accept it for the justice to be found. In the novel To Kill a Mockingbird the truth wasn’t found in time, however in the movie A Time To Kill justice was eventually found only after the loss of lives though. The death of the truly guilty party lead to the truth in both cases though.

Recently in Cincinnati we have being going through a lot of civil unrest, and we have really been concentrating on color. Our judicial system has really had to look at race and racial profiling, because Cincinnatians are really tired of the justice system not being blind to race or class. With cases such as the Timothy Thomas case Cincinnatians have began to seek awnsers, and one sure fire awnsers is that race does matter. Now the people of Cincinnati are trying to get to a point where we can say it doesn’t.

True justice can only be found when, race isn’t a factor that will play against someone being treated fairly. For race not to be a factor people must distinguish the difference between a person and the stereotypes they know about the persons race, and only know the facts about the struggle the particular person has had. As the book To Kill A Mockingbird said it is a sin to kill a mockingbird. The mockingbird being a innocent person that has done no wrong, just because a mockingbird is a bird doesn’t make it evil or worthy of death. Justice should be colorblind, its stated in the Constitution but it isn’t always, in fact a lot of the time color is a major contributing factor, maybe as the world grows into one community everyone will drop the color barriers and race will become obsolete.

Racial Injustice In To Kill A Mockingbird. (2016, Jul 16). Retrieved from https://studymoose.com/racial-injustice-in-to-kill-a-mockingbird-essay 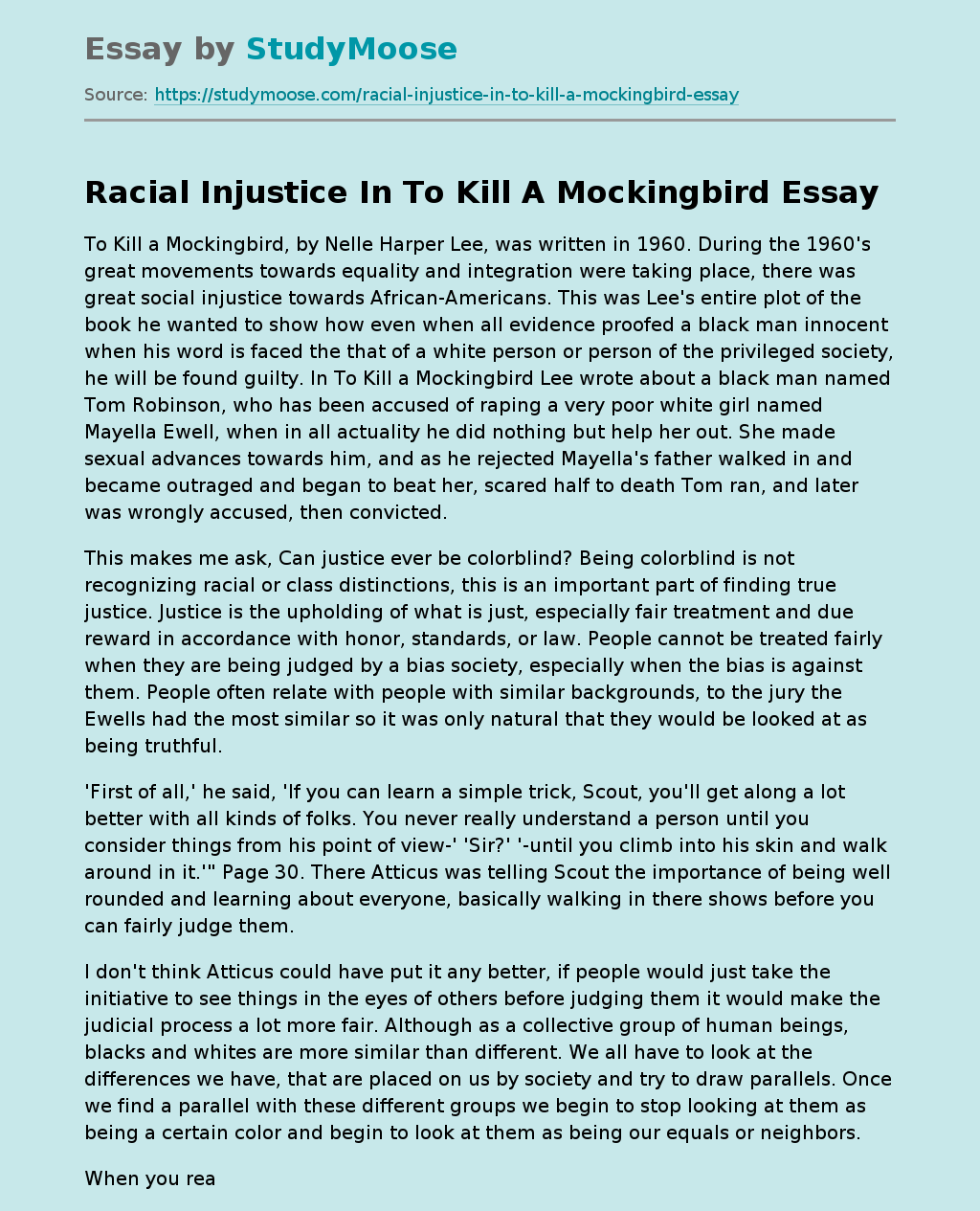