Many scholars claim this over-centralized system as one of the reasons for public sector governance inefficiency and ineffectiveness in public services and citizens’ living under poverty (Dickovick and Tegegne, 2010). Under EPRDF, in order to address the failures as well as the challenges of decentralized public governance, the government has put forward different development plans, policies, strategies and programs to achieve its vision of a ‘middle income country’ by 2020(UN, 2007). Since 2001, the Ethiopian government’s medium term national development frameworks (PRSP, PASDEP, GTP I and GTP II) emphasized the need for decentralized decision-making and implementation for better PSPs.

Don't use plagiarized sources. Get your custom essay on
“ Public Sector Governance ”
Get custom paper
NEW! smart matching with writer

To address the present day governance and socioeconomic development problems, the current government introduced District Level Decentralization Program (DLDP) in 2001/02. It has promised better governance and deeper democracy. Essentially the legal frameworks exist in the federal constitution and in the laws promulgated based on this and in local government Acts. A comprehensible division of responsibilities between local and central government is evident on various policy frameworks put in place to realize this DLDP.

Much has also been stated about the importance of the stakeholders. Enhancement of services of public interest, accountability, transparency and good governance are everyday issues of government bodies at all levels.

There also appears, swearing to political will and a gesture of commitment. Creating space for all who can best contribute towards development and the achievement of this program is a slogan repeatedly heard (Chanie, 2007).

However, despite the recognized importance of DLDP for effective decentralized governance to improve public service provision, various reports and research findings show non-compliance with the above and deficiencies at all levels. On top of poor planning and inefficient flow, human and financial resources have always been inadequate and at insufficient levels (Debebe, 2012). This has adverse implications for the capacity of local governments to perform their assigned functions. The weaknesses of the district implementers is always said to be evident, to the extent that they are not even aware of their powers.

Decentralization Program (DLDP), enacted in2002, was considered dynamic change since it featured political, administrative and fiscal changes at a national level. Nevertheless, improvement at the basic grassroots level is still a topic of discussion. There is little empirical studies conducted to evaluate the effectiveness of decentralization on service delivery in Ethiopia and even a few available empirical researches on the Ethiopian decentralization reform seems to offer contradictory conclusions. For instance, Melkamu, Worku and Asfaw (2015) argued that decentralization empowered more local government official elites than ordinary citizens at the grassroots level. Similarly, Zemelak (2011) revealed that, though the government devolved power to local authorities, the system is deemed not responsive to local preferences or accountable to ordinary citizens. Instead, the system appears to have been used as a control mechanism for the central government. Tsegaye (2006) also indicated that the social cohesion and unity of ethnic group in Ethiopia is weakened following the ethnic decentralization in Ethiopia.

On the other hand, the most recent study conducted by UNECFA (2016) found that, decentralization in Ethiopia has led to an increase in the range and level of service delivery to the citizens through the zones, woredas and kebeles. The success of service delivery has, however, been hampered by the Government’s retention of key institutions that offer or facilitate the provision of services to citizens. To the extent that the Government continues to do most things and on account of its poor comparative advantage, the quality of services delivered remains poor (ibid). This indicates that, more research on Ethiopian decentralized governance reform needs to be done to put new directions for improved implementation.

Furthermore, after critical review of existing literature in Ethiopia, it has been observed that knowledge gaps exist in research evaluating the effects of decentralization on service delivery measured by the quality of service and citizen satisfaction in Ethiopia in general and study area particular. In this regard, few researchers have examined the relationship between the process of decentralization and its outcomes on service delivery in Ethiopia. Examples include those looking at the education sector, Thomas, H. (2010/11) Obsaa,T.,(2.010),· and the health sector(Gebre,2016) water sector(Degefa, 2015). However, some of these studies highlight the types of institutions created by the reforms to facilitate delivery and no attention has been paid to the interplay between the local level institutional arrangements and the broader governance structures based on an analytical framework. Similarly, the differences and constraints in institutional arrangements between different sectors have not been fully explored.

Objectives of the study

General objective of the study was to investigate the effectiveness of district level decentralization on health and water service delivery in Horro district of Oromia regional state, Ethiopia.

Specific Objectives of the Study

In line with above general objective, the specific objectives of the study were to:

This study will try to address the following research questions;

This study investigated the effectiveness of district level decentralization on health and water service delivery in Horro district. Therefore, this study would have the following multidirectional significances.

The timing of the study is in tandem with the current Ethiopia government in taking great efforts on institutional reforms. Therefore, the study aims to provide an explanation about the disappointing health and water service delivery in the country at district level. In addition, the study aims to provide information to policy makers regarding the successes and challenges of District level decentralization on health and water sector reforms in the country for future improved development policy consideration. In addition it helps to build my career, the study adds to already existing empirical and theoretical body of knowledge in terms of new insights about the ongoing public service sector reforms in Ethiopia.

Finally, it would provoke some in depth research question in the area of district decentralization and local basic service deliveries. 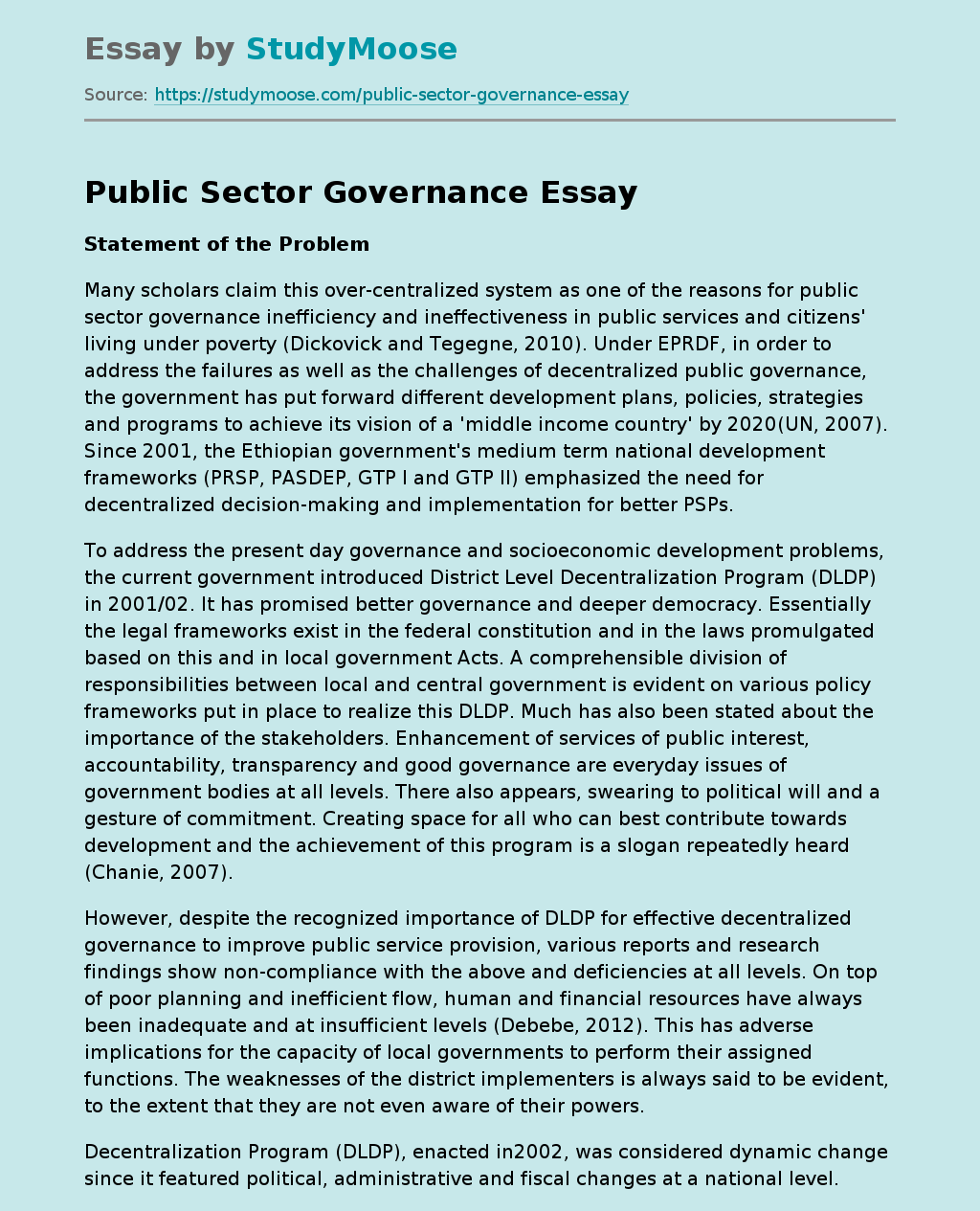