Public Knowledge, Beliefs and Attitudes Towards Patients With Schizophrenia: Buenos AiresMahsa MohammadiWake Tech Community CollegePublic Knowledge, Beliefs and Attitudes Towards Patients With SchizophreniaSchizophrenia is a severe mental illness that changes the emotions, thoughts, and behaviors of the patient. This disorder affects approximately 0.5-1% of the population and its a complicated disease that can not easily be explained, but it can be categorized into two types: acute schizophrenia and chronic schizophrenia. Researchers have found that 5 to 22% of the patients recover from a first episode and that almost 40% of people with schizophrenia can enjoy a functional recovery after one or more psychotic episodes.

Don't use plagiarized sources. Get your custom essay on
“ Public Knowledge Beliefs and Attitudes Towards Patients With Schizophrenia Buenos AiresMahsa MohammadiWake ”
Get custom paper
NEW! smart matching with writer

The disorder we now know as schizophrenia has been confusing throughout history. It was once thought that people with this disease were hunted by the demons and therefore feared, tortured, exiled or imprisoned forever. The interest and attention towards the schizophrenic patients due to the delusions and hallucinations are too high, and there is a stigma, or in other words, a negative attitude and beliefs held towards these patients.

The discrimination and the attitude towards these patients are overwhelming for individuals and can be damaging for the full recovery. There are also some adverse outcomes for these patients such as low self-esteem and unemployment and depression. In this study, the author tries to evaluate the knowledge, social distance, and perception of social discrimination in the general adult groups and compare them with other international studies.The method that is used in this article is sampling ” carried out a survey among people aged 18 years and older and accompanied by eight psychology students.

Raters received several training sessions to ensure interrater objectivity and were directed to approach every person at a first passed-first surveyed basis. The survey had 33 items and divided into five divisions. Demographic data, relation with persons with mental illness and more specifically with people suffering from schizophrenia, questions about any knowledge about the disease, social distance towards people with schizophrenia and lastly the perception of social stigmatization. For all the section the respondents were asked to answer in a Yes/No format.As a result, People living with persons with mental illness or those with schizophrenia had more knowledge about the disease than people who do not live with them. There was a positive relationship between age and social distance. Older people had significantly higher social distance. Knowledge was connected with social distance with small effect size, and social distance score correlated with the perception of social stigmatization score with medium effect size.This study observed that knowledge about schizophrenia was moderate compared with other international studies, although methodological differences between studies could be considered for some of the differences found. Social distance increased with the higher closeness of the relationship, meaning that there are particular and private areas of life where people are hesitant to let persons with mental illness enter. The fact that one in four people would be bothered about working with a person with schizophrenia shows the social barrier that rehabilitation programs face to connect patients to the job market. The result of job discrimination in this study is surprisingly higher than in developed countries. A possible description for this result could be that the city the survey took place is mainly composed of middle-class citizens, and members with schizophrenia of this social class in undeveloped countries tend to have a less favorable outcome than the rest of the population. The sex difference only found in the marriage item, and women were more hesitant to marry a person with schizophrenia than men. The perception of social stigmatization in this study was high, and this could show actual higher discrimination towards people with schizophrenia.As a conclusion, the research shows that in Buenos Aires, although awareness about schizophrenia is similar to developed countries, social distance towards people who have schizophrenia is higher, and the perception of social stigmatization is greater. It seems that to reduce discrimination, we must consider other measures besides education, such as developing public anti-stigma policies. This study points out the lack of particular operations or campaign addressing the elderly, a group which showed less tolerant views. Also, reducing the social distance held by people living or working with persons who have schizophrenia would probably bring many advantages to the quality of life of these patients.I think the strength of this article was the survey method. The first passed-First survey helped the surveyors to have a large type of people in their research regardless of gender and age, education and marital status. Having two different age group of respondents and the questions that were asked helped to develop a good study on the topic because it was not concentrated just on people who have any association to the patients but also with people who have not any ideas of the illness so that the result could be as reliable and accurate at it was. The result of this study was based on age and gender, for example, men tend to marry women with schizophrenia more, and elderlies are more likely to get social distance from people who suffer the disease.As mentioned in the article the variable dichotomizing avoid more accurate intermediate answers. To explain this, assume there is a patient in a medical practice that been asked for a specific question and there is no option to chose rather than Yes or No if she select No there are specific labeling descriptions and linked prescription recommendation. This problem may negatively affect the result of the survey. For example among the questions being disturbed by having a neighbor with schizophrenia caught my attention, most elderlies been bothered by being neighbor with schizophrenic patients but having Yes/No answers is not enough to justify the real cause behind their answers. There were several more question like this in this article that if it was not based on dichotomizing would change the overall results.There is always a possibility that between the people that were engaging in the survey and research, some do not fully understand what the disease is. And they may answer the Yes/ No question by their limited information or lack of any concepts about the mental disorders and illnesses. To have a sounder study and result, if I could improve this study, I would add True/False questions, such as general information to evaluate the knowledge of participant in the questionnaire, such as ordinary people likely to suffer these types of disease? Married or widowed people? Genetics? By asking these kinds of question and counting the answers towards the final steps and analyzing the data, there is more likely to have an accurate conclusion and result at the end of the study. For example in this study elderlies are more likely to avoid patients with schizophrenia disease, this result might be the outcome of having no knowledge of what the disorder is, they may think that schizophrenia is Contagious disease and they may be affected so by evaluating their understanding of this illness we may have better result in general.ReferencesLeiderman, E. A., Vazquez, G., Berizzo, C., Bonifacio, A., Bruscoli, N., Capria, J. I Milev, R. (2011). Public knowledge, beliefs and attitudes towards patients with schizophrenia: Buenos aires. Social Psychiatry and Psychiatric Epidemiology, 46(4), 281-90. doi: 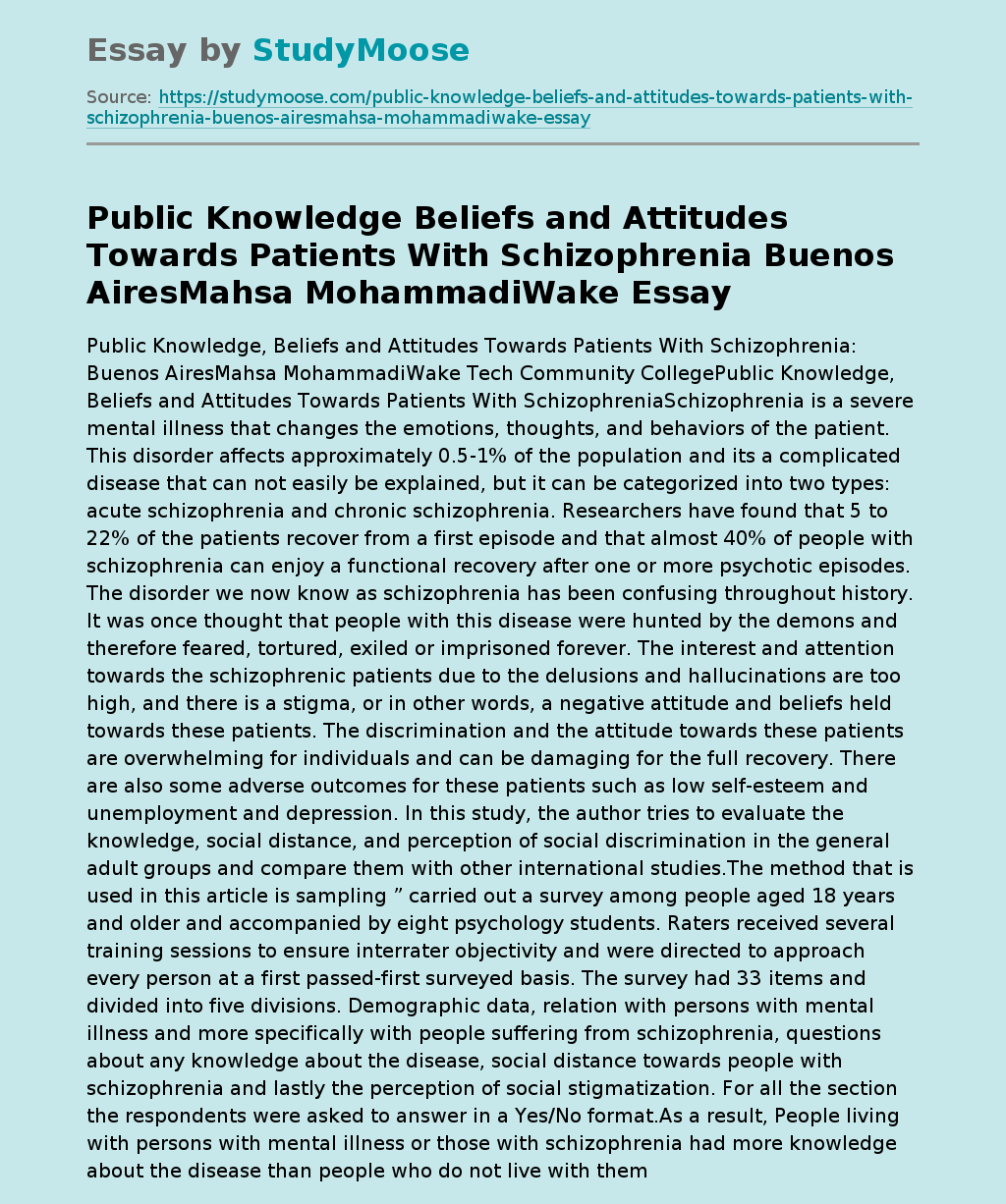