How to Inspire Legislative and Electorate Action about an Electric Vehicle

I have recently invented a solar-electric hybrid vehicle that could have immensely positive effects on drivers of California, and it could also facilitate a significant reduction in the use of fossil fuels in the state. In order for my invention to gain more prevalence throughout the state and to begin making these changes, I will need to have a piece of legislation passed. I believe that individuals who purchase one of my hybrid vehicles should be entitled to a $4,000 tax credit because of the positive impact they are having on the environment.

Don't use plagiarized sources. Get your custom essay on
“ Process for Passing Legislation ”
Get custom paper
NEW! smart matching with writer

There are several ways to go about this.

In order for this appropriations bill to be passed by the California legislature, several things need to happen. I first need to contact my congressman and inform him about my product and the idea that I have for a piece of legislature. This is my primary involvement in the legislative process as I have the chance to speak with my congressman on the merits of my product and the legislation that I would like passed.

The legislative process begins when either my state senator or my state assemblyman decides to author the bill for me. After my congressman has authored my bill, it is sent to the Legislative Counsel to be officially drafted into a bill. The newly drafted bill will be sent back to my congressman so that it can be introduced to his or her congressional house, the Senate, or the Assembly.

My congressman will read the proposed bill to his/her congressional house and the bill will be sent to the Office of State Printing not to be dealt with for 30 days. Next are the committee hearings. The bill is sent to the Rules Committee where it will be reviewed to see which policy committees in which it needs to be seen.

For this specific bill, I believe that it would be sent to committees such as the Appropriations Committee, Environmental Safety and Toxins Committee, Natural Resources Committee and the Revenue and Taxation Committee. This is because the bill deals with a $4,000 tax credit for individuals and also because my product has an impact on the environment and our use of natural resources. These committees can pass the bill as it is out forth by my congressman, pass it with amendment, or they can defeat the bill. If the bill survives the committee process it is then read a second and third time, followed by a roll call vote within the congressman’s congressional house. As an appropriations bill, it would need 27 votes in the senate and 54 votes in the state assembly to be passed. If the bill passes after undergoing this whole process in one of the congressional houses, the process is then repeated in the other house. If both housed approve the bill, it is then sent to the governor where he can either sign it, allow it to become law without his signature, or he can veto it.

Use of Lobbyists, Interest Groups and Campaign Contributions

The most significant way that I can help my legislation get passed is through the use of lobbyists and interest groups. Lobbyists and interest groups often have very close relationships with members of congress and their influence in the legislative process is invaluable. I would need to employ lobbyists from environmental groups to help communicate with my congressman the advantages that my hybrid vehicle would bring to the state of California. Interest groups can mobilize my idea within the population and lobbyists can promote my idea face to face with my congressman. Campaign contributions are also incredibly influential in the legislative process because there are many interest groups, lobbyists and corperations that can influence congressmen by either contributing to their campaign funds in return for legislative action, or they can withdraw their often massive contributions if the congressman does not support legislature that caters to their best interests.

I could also take the route of direct democracy in order to get my legislation passed. This would occur through the initiative process. I would need to make a request for a title and summary for my proposal. Because this process is so expensive I would most likely need to have the help of lobbyists or interest groups. I would also need to hire attourney’s so that my proposal can be drafted in proper legal text. Once the attourney general has prepared a title and summary for my initiative, it is on to the signature process. I would need to acquire a number of signatures in support for the initiative that is equal to the full number of votes that were casted for any governor candidate in the last gubernational election. If I indeed allocate this many signatures, the Secretary of State will include the initiative in the next general election and any special elections subsequent to the intitiatives qualifying.

After I have successfully brought my initiative to the ballot, I will need to campaign for it so that I can see that it is passed in the next election. At this point there is no doubt that I will need the aid of interest groups, not only for their public influence but for their campaign funds. I will need to select a sponsor that not only has funds but also has the ability to reach the voters. Research will need to be funded not only to analyze the potential benefits of my hybrid vehicle and the tax credit that it would bring individuals, but to analyze the public opinion and how voters can best be reached. Focus groups will help me to develop my strongest arguments for why my bill should be passed and these ideas will be put forth in advertisements. Television advertisements, radio advertisements and hired interest group lobbyists will be my primary means of campaigning for people to pass my legislation.

I believe that direct democracy would be the strongest means of getting my hybrid car tax credit passed into legislation. I believe that bills that are proposed to the legislation are often impeded by the partisanship of the members of Congress. This is true not only on a federal level but at the state level. I think that lobbyists can only propel a bill so far into the legislature before partisanship will defeat it, or amend it beyond its primary purpose. The legislative process is a good safeguard for mitigating the number of laws that are passed as well as intensely analyzing their contents before they are passed.

But, I do not believe that the legislative process would serve my bill well. Direct democracy would be a good means of getting my legislation passed because I believe that it would be easy to mobilize voters on a bill that could potentially credit them $4,000 for purchasing an already money saving car. The preservation of natural resources is an issue that more and more people are agreeing upon today and I do not believe that anybody would be opposed to a tax credit. I think that my only problem with the direct democracy route would be actually mobilizing people to vote. Because this bill really only effects those who are purchasing my vehicle, the number of people that would feel the need to vote for it would be very small. People do not often vote on things that they feel do not have an effect on them and that could be problem when it comes to mobilizing the electorate to consider my car that effects a small group of people. 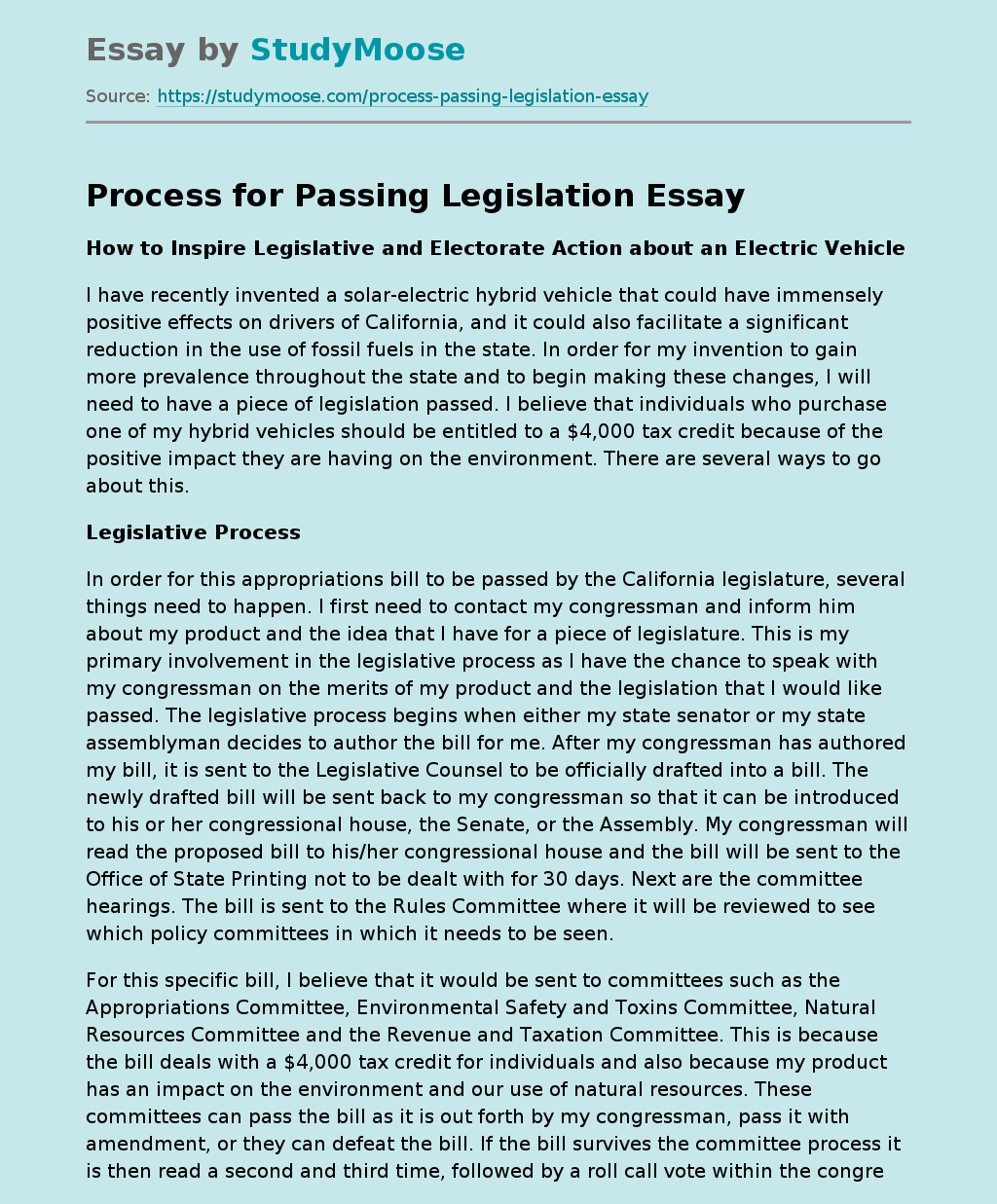