Death of Clare in a Novel Passing

The death of Clare at the end of Nella Larsen’s Passing though left unclear was, in my opinion, caused by Irene pushing her out of the window. Nella Larsen does not specify what exactly happened, but Irene pushing Clare out of the window seems like the most plausible one. I don’t know whether Larsen intentionally left the ending so abruptly but I just feel as if Irene was the one to kill Clare.

Larsen makes this point clear through the phrasing she uses when describing the self-esteem destruction Irene undergoes once Clare has reinserted herself into Irene’s life, and the situations Irene finds herself as a direct result of Clare.

Don't use plagiarized sources. Get your custom essay on
“ Death of Clare in a Novel Passing ”
Get custom paper
NEW! smart matching with writer

Prior to Clare’s reentrance into her life Irene is a self-assured, independent, and confident woman; however, she soon turns self-conscious, dependent, and hesitant. When viewing Clare at the hotel Irene is struck by Clare’s beauty stating, “She’s really almost too good-looking “(Larsen 27).

The word “good-looking” shows that Clare is beautiful, however, it is the addition of the word “too” that indications that Irene feels inferior to Clare’s beauty.

Clare embodies beauty, as she is “too good-looking”. When Clare requests her presence at tea Irene fears Clare will not believe that she had a previous engagement. Larsen writes, “She was afraid Clare would not believe it” (Larsen 27). It seems foolish that Irene should care what Clare believes of her integrity. Irene’s self-esteem not only continues to deteriorate, but displays of internalized racism begin to present themselves through illogical thought and irrationality.

Irene describes Brian in the same way she does Clare as, “extremely good-looking” (Larsen 77).

Irene, does not view herself as “good-looking”, therefore she believes herself unworthy of Brian an “extremely good-looking” man, so she assumes Brian and Clare are engaging in an affair. Despite assurances from Brian that he does not view Clare as “extraordinarily beautiful”, Irene remains convinced that they have engaged in a relationship. As an African-American woman Irene must contend with the ideology that she is not worthy because of her complexion.

Clare’s presence in her life forces Irene to face feelings of inferiority. Though Clare is African-American she lives her life as a white woman. Irene no longer views Clare as African-American, but a white woman who threatens her life. White women are believed to be the epitome of beauty, so why would Brian, when presented with the best, not choose the finest option according to society? Larsen writes, “Irene Redfield wished, for the first time in her life she had not been born a Negro” (151).

Larsen includes the word “first” to inform readers that Clare is the cause for Irene’s internalized racism. She had never before contemplated what it would be like to have been born of another ethnicity. Clare forces Irene to feel inferior within her own home because she is not white. She is told everyday by society that she is inferior because of her skin color and now because of Clare she must return home and struggle with the knowledge she is not worthy of her husband because she is not white. While Clare never voices her emotions to Irene, she fears Clare; though she never verbalizes this fact Larsen shows it by writing, “A conviction that the words were intended as a warning took possession of Irene” (Larsen 166). Irene is in her own home, yet she feels Clare somehow “possessing” her.

Larsen creates an image of an innocent person forced into a situation. The word possession implies a lack of choice and that Irene feels lesser. In Irene’s eye Clare is not a woman who passes, but a white woman whose presence in her home threatens the comfort and security of her life. Irene has managed to eradicate all knowledge that Clare is actually a biracial woman “passing” as white, allowing her to see Clare as she views all white women in society, as threats. Larsen indications this when saying, “she was aware that, to her, security was the most important and desired thing in life” (169). Towards the end of the book, after Irene runs into John Bellew, she begins to think about Clare and John divorcing.

And Larsen writes, “Then came a thought which she tried to drive away. If Clare should die! Then – Oh, it was too vile! To think, yes, to wish that! She felt faint and sick. But the thought stayed with her. She could not get rid of it” (101). The thoughts that Larsen has Irene thinking makes it seem as if Irene wants Clare dead. If she really cared about her she would never have thought about her dying and if she had for some reason then the thought would not have stayed with her. Later on in the same scene, Larsen writes, “She turned her face to into her pillow to cry. But no tears came” (101). I think that if Irene really felt bad about her thoughts, she would have cried about it.

When Irene finally realized that Clare had died she had so many thoughts in her head. Larsen writes, “It was an accident, a terrible accident,’ she muttered fiercely. ‘It was” (112). The inclusion of that last line, the italicized “was” makes it seem as if Irene was trying to reassure herself that it wasn’t her fault. And then she goes on thinking about whether she should have stayed or not because she knew that people would eventually find her body and ask questions.

In a few sentences Larsen establishes that Irene is self-conscious about what Clare will think of her, dependent on the approval of Clare, and hesitant to make a decision for fear of what Clare might choose to believe. Irene’s destruction continues as Clare inserts herself into Irene’s inner circle of family and friends. Irene went from having a good head on her shoulders to becoming a paranoid jealous women; which leads readers to believe that Irene pushed Clare.

Death of Clare in a Novel Passing. (2016, May 23). Retrieved from https://studymoose.com/death-of-clare-in-a-book-passing-essay 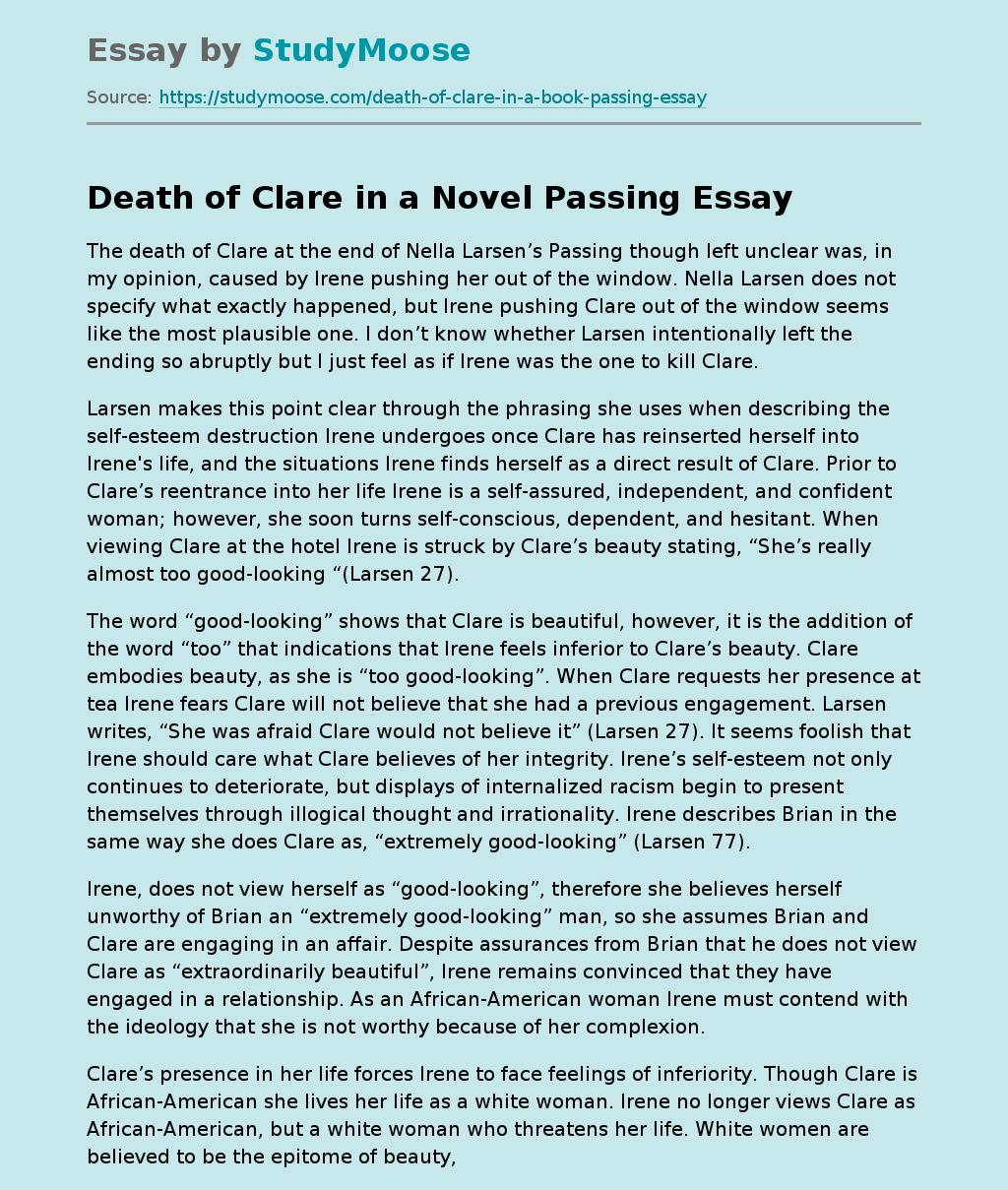