A Poem The Man He Killed by Hardy

Because war is a mysterious entity, Thomas Hardy wrote “The Man He Killed” to emphasize the occasional inadequate reason for conflict, and the range of emotions someone may feel after engaging in conflict that an individual might feel unnecessary, and after taking a persons life simply because he was my “foe”, especially in the Boers Wars in which the British colonized South Africa, in which this poem is set. Hardy is able to convey the feeling of apprehension and shame however not renouncing his allegiance to the crown by using figurative language, and literary elements such as repetition, symbolism, and wordplay.

Don't use plagiarized sources.
Get Your Custom Essay on A Poem The Man He Killed by Hardy Just from $13,9/Page

Throughout the poem the narrator is speaking of war, although there is a lack of chaos and violence. He refers to war as “quaint and curious”(line 17). That changes the idea of war for the reader, and lures the reader to feel a lack of necessity for the battle, which is what the narrator feels. “And staring face to face, I shot him as he at me, and killed him in his place.

” (lines 6-8) There is a recognizable absence of emotion here, as one might feel traumatized or regretful after taking a life, and we know war is not “quaint and curious” (line 17). War is meant to be bloody, and chaotic, which in most literature, it is. In “The Man He Killed” the altercation seems more like an execution or murder than a battle, causing the reader to question whether it was justified or not.

Furthermore, repetition is used throughout the poem also and causes the reader to doubt the mans true feelings about war, and what he had done, “I shot him dead because – Because he was my foe, just so: my foe of course he was; That’s clear enough; although” (lines 9-12). The author chose to repeat the words because, and foe to let the reader know that he had to assure his own self of why he had just killed a man. “Because – Because he was my foe” (lines 9-10), the dash between the repeated because represents a pause, airing doubt on why exactly he killed the man. He also states “that’s clear enough” (12) which is ironic because it simply isn’t true. He doesn’t understand why he shot the man; he is wondering why he just took his life beyond him being his foe. It can also be argued that in the narrators series of events, these men are interchangeable, “He though he’d list perhaps, / Off-hand-like—just as I— / Was out of work—had sold his traps— / No other reason why.” (lines 13-16) It seems as though, out of desperation and lack of monetary funds to support themselves, they both enlisted in order to survive and to support their families.

The author gives few details about himself, or the man he killed, but the reader can derive from what he does say that these men are very similar, even though they are enemies, which is just what their countries told them, in reality, and in Gods eyes, they are just two men on Planet Earth. Hardy uses several literary elements to convey his ideas. He constructs the poem to emphasize the points he is trying to make. The uses of dashes are the driving force of feeling for the reader, and expose the insecurities the narrator has about what is happening. It is first recognized when in the ninth line while repeating the word because, it seems as if he is hesitating, unsure of what to say, or if he even believes in what he is saying. Furthermore in the following stanza, he uses several dashes to interrupt himself while he creates a scenario for the man he had just taken life away from “Off-hand-like—just as I—“(14). Again, emphasizing the similarity between the men.

This happens over in the next line, which brings a sense of realism to the story. The narrator is speaking to the reader, trying to justify what had happened, he doesn’t know these things about the man he had just killed, but he may be feeling guilt about what he had just done. “Was out of work—had sold his traps— / no other reason why” (lines 15-16). He may be hunting for the purpose as to why he shot the man but cannot find a reason. In the final stanza, the narrator adopts his emotionless, lack of sensitivity character and states how “quaint and curious war is!”(line 17). and it seems as though he has moved on from the fiasco, but not without some deep thought about they mans life he had taken away. The poem begins and ends in a bar, where friendships are made or sometimes broken. Unfortunately, this friendship was broken before it had a chance to begin, and the narrator is forced to only imagine if they had “wet right many a nipperkin” (line 4) which is to share a drink together.

Hardy in “The Man He Killed” does a wonderful job exposing the insecurities of the man, without even stating them by using figurative language and literary elements. The repetition deduces hesitation, while other elements such as wordplay, and the use of dashes represents deep thought, and possibly regret lets the reader infer how the man is really feeling which is different from the words on the page. Taking a life whether in war, by accident, or on purpose is bound to have effects on you for the rest of your life. Posttraumatic Stress Disorder and other factors can change how someone acts and feels, especially after war. The narrator is having a hard to coming to reality, and continually attempts to justify his actions. He infers a question of why he must kill this man, or if in another situation they could sit down at a bar together and have a good time. This thought obviously troubles the man.

A Poem The Man He Killed by Hardy. (2016, Jun 02). Retrieved from https://studymoose.com/a-poem-the-man-he-killed-by-hardy-essay 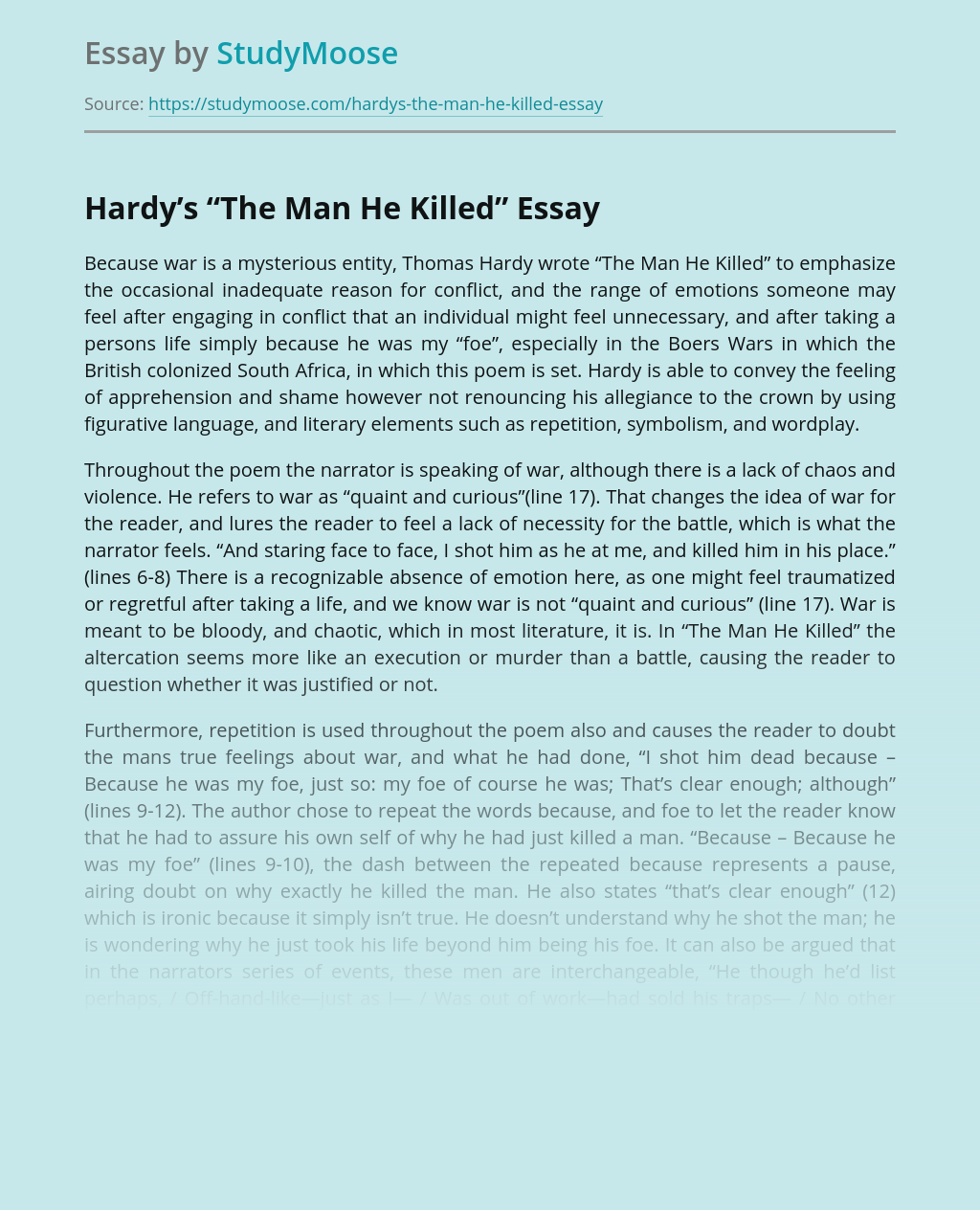 “Saplings In the Storm” by Mary Pipher

In her essay “Saplings In the Storm,” Mary Pipher discusses the changes girls face once they hit adolescence. Through figurative language and tone her essay successfully expresses what the young women go through. In her “Sapplings in the Storm” essay, Mary Pipher brings attention to the struggles, changes, and hardships young girls experience when they...

Get Essay
A Ghost Story No Angel by Bernie McGill

The Person I Admire The Most

We might have met up with a lot of people throughout our life, yet people leave and life still goes on as what it used to be. The person that I admire the most is none other than my mother. I admire her the most as she possesses many of the qualities that we should...

In the novel ‘To Kill A Mockingbird’ by Harper Lee, learning to “walk about in someone’s skin” is a main theme, particularly as two of the main protagonists Jem and Scout learn to do this as they grow up throughout the book along with the reader. Atticus, the children’s father, educates the children on how...