Oct. 18, 2001 Thesis Private prisons can be a profitable and secure alternative to government run Statement prisons. Private prisons are able to be profitable by controlling the administrational cost of operating the facilities. At the same time, they must adhere to high governmental standards to maintain the right to operate.

Background As a nation, we have many issues that we must face. One of those issues is the administration of the, already overcrowded, prison system. This issue is one of the most taxing problems facing our criminal justice system.

Don't use plagiarized sources. Get your custom essay on
“ Private Prisons ”
Get custom paper
NEW! smart matching with writer

Evidence #1 Containing labor costs is a crucial issue of the privatization movement. Approximately 70% of the costs of operating a prison go to staff salaries, fringe benefits, and overtime (Logan 2).

The administration of this cost is difficult to achieve with unionized government workers. In contrast, private institutions use nonunion and contracted labor, allowing for the lowest benefit packages. With nonunion and contracted labor, government restrictions that interfere with efficient personnel management such as hiring, firing, promotion, salary setting, assignment of duties, work schedules, vacations, and overtime can be avoided. Overall, private institutions contend that they can save around 15% in prison operations when labor cost is efficient handled (Logan 2).

Evidence #2 Another way the private sector can control cost is that the private sector has greater flexibility in the procurement process. The private sector contractors are not bound by the same cumbersome and stiff government procurement system. Private vendors can purchase goods and services quicker. They can maintain lower food, supplies, and equipment inventories as well as negotiate better prices for these goods. Competition between contractors, that will supply these goods, will help hold down costs and provide for superior service. Contract renewals are always on the line
if service becomes questionable.

Evidence #3 One of the most asked questions is what happens in the case of a strike? The answer is about the same as for a government-run prison. Contracted prison guards may not have the right to strike but the absence of this right has not prevented guards from participating in strikes, sick-outs, and other job actions. At a private prison in Rhode Island, all but a few contract guards walked off their jobs. On the other hand, all but a handful of guards at New York’s 33 state-run correctional facilities went on a strike that lasted 17 days (Logan 6). Of course, a disruption at a privately run facility could allow the government to terminate a contract. The threat of termination due to loss of a contract or simply being fired from the position is a strong incentive against a strike. In any case, the National Guard and state police will provide the ultimate backup for prison staff, be it private or public.

Evidence #4 Another question is what happens in the case of a riot or escape? In fact, the experience of privately run prisons has been no worse off than that of the government-run facilities. Most contracts require that privately operated prisons conform to the law, rules, and regulations set down by the government. This is, at times, more tightly monitored than the government-run facilities. Keep in mind that the privately operated prison contracts will always include a contingency plan to deal with strikes, riots, or bankruptcy.

Concluding With many investors becoming interested in the profitability of investing in the statement private prison system, there seems to be more facilities opening yearly. The government echoes the is happy with this trend, as it has enabled them to keep up with the growing prison thesis population at a reduced cost. As far as the government is concerned, the private prison statement system is a good thing, and they are here to stay. 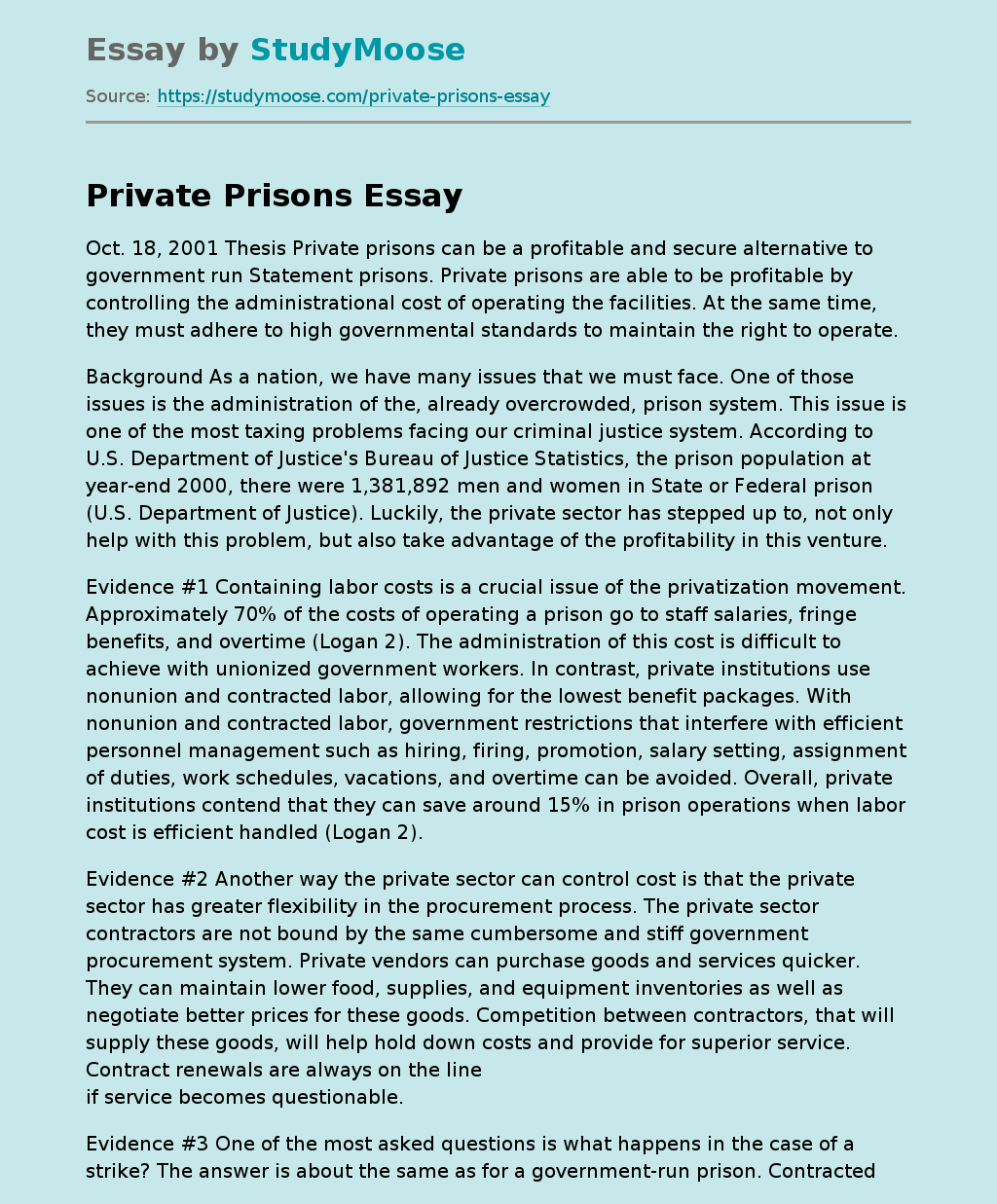