‘Measure for Measure’ does not fit into a particular genre of other Shakespearean works and has thus accumulated the label of ‘tragicomedy’. The Duke’s philosophy, “Tis a physic that’s bitter to sweet end” reveals the overall course of the play. The preponderance of the play is not a comedy; many of the characters, like Claudio, Isabella and Mariana have been put in distressing situations and subjected to great deals of unfairness. Yet through the Duke’s manipulations and his plot with Isabella, the play will proceed to a neat, happy ending as was the convention of the Elizabethan comedies.

Don't use plagiarized sources. Get your custom essay on
“ The principal characters in ‘Measure for Measure’ are motivated by personal gain ”
Get custom paper
NEW! smart matching with writer

The question is- are the Duke, and Isabella’s motivations to achieve a just application of the law, or to protect their own integrity? The Duke is the protagonist and how we interpret his character has a crucial effect on the interpretation of the whole play. Is he, as Lucio offers, a “Duke of dark corners” or does he bear “the sword of heaven”? Is his “ethical attitude exactly correspondent with Jesus”, as the critic G.

Wilson Knight has suggested, or is he a Machiavellian power monger who moves unseen amongst his people in order to dominate them, as has been argued by Richard Wilson?

The Duke’s motivations are suspect and unexplained by the law: why does he announce that the rules need to be better enforced, and then run away at the crucial moment? The Duke laments the disparity between the appearance and the nature of Angelo, although the authenticity of such mourning is questionable seeing as he knew much of Angelo’s characters and vices before electing him in a position of moral authority.

Lucio makes a novelty, perceptive comments upon the Duke’s needless disappearance, because as long as there is “eating and drinking” there will be sin, for people are naturally disposed to fall at times.

This leads us to question the most basic reason behind the Duke’s temporary abdication: is it an altruistic move, or because he does not wish to lead the country into any more corruption, or has he deliberately put his opposite in power so people learn to appreciate his permissiveness? Isabella is the pillar of restraint in the town, an ironic contrast to her brother Claudio, who is being sentenced to death for impregnating his girlfriend. Early in the play she asks one of the nuns if she could not have more strict restraint as one of the sisters there.

In response to Angelo’s question posed about whether it would be better for her to give up her chastity or for her brother to die, she answers, “better it were a brother died at once, than that a sister, by redeeming him, should die forever. ” Isabella prizes her virginity over her brother’s life, because she will receive eternal damnation for ever more, whereas Claudio can go to Heaven in his next life. Isabella exaggerates Angelo’s wickedness in order to make her proposition seem more unpalatable to her brother- some would see to call Angelo “a pond as deep as hell” as a vast overstatement of Angelo’s flaws.

If this is the case, then Isabella’s exaggerations would be expedient, for Claudio will be less likely to beg Isabella to sleep with Angelo. Isabella is not even moved when Claudio talks of the “fiery floods” and “thick-ribbed ice”, images emphasising his fear that death is being suspended in nothingness. Isabella concisely replies, somewhat harshly, “‘Tis best that you diest quickly. ” Claudio claims that if Isabella committed this sin in order to save him, it would almost be a virtue on her part. Indeed the Duke advocates this opinion later, when trying to convince Mariana to sleep with Angelo.

Perhaps Claudio is overstating this to try and convince Isabella, but his appraisal at this point seems more rational and Isabella’s reaction seems like just a knee-jerk reaction to a distasteful proposal. However, the play is set in a more religious age, when life itself seemed a short and significant matter in the light of eternal judgement. Although many readers have seen her as unsympathetic we must remember here the historical context; significantly no-one in the play criticises her for her firm belief as this was the moral orthodoxy of the time.

Isabella’s predicament is also affected by the obtuse limitations of the law, which in this scenario is a direct contrast to justice, where a death is more lawful than a birth: “I had rather than my brother die by the laws, than my son should be unlawfully born. ” It is, however, interesting to note that Isabella fiercely protects her own virginity, but does not extend the same logic and protections to Mariana, encouraging her to pose as herself, and sleep with Angelo, in order to ensnare him.

She even describes the plot as a “prosperous perfection. ” In Act IV Scene III the Duke manipulates the action as the friar, but with a plain purpose in mind; the fact that he decides to tell Isabella that her brother is dead, so that she can be happier later, serves no purpose but the Duke’s hidden ones. The Duke tells Isabella “trust not my hold order if I pervert your course”; this is meant to comfort Isabella but is a big license on the Duke’s part. Here he plays on Isabella’s trust in the clergy to get her to go along with his play.

The Duke says that he did “not [change] heart with habit” but he is assuming roles and liberties that are not his and in doing so is an abuse of the priesthood and the status and respect that go with it. Roger Allam, who played the Duke for the Royal Shakespeare Company in 1987, felt that his character “constantly uses other people, Angelo, Claudio, Isabella, even Lucio as a means of self knowledge”. However, David Massy, who played the Duke in 1983, believes that it is only through a “a passionate desire to put things right. ”

The theme of manipulation comes to the fore in the concluding scene, as we realise how much of the denouement of the play has been driven by the Duke. Even though he appears benevolent and fair when compared with Angelo, he is not quite as altruistic as he seems; many of his deeds have been secretive, conniving and shamelessly exploitative (Mariana being a prime example). This scene is lengthy, like the grand, declarative tone of the Duke when he re-enters the city. It is hard to remember that his manipulations are being acted out in a public place in order for the finale to bring justice and Angelo’s exposure.

Angelo does not realise his accuracy when he senses that both Mariana and Isabella are “but instruments of some mightier member”; in fact they are but playing the parts the Duke has set out for them. In certain aspects, the Duke is as guilty as Angelo in his crimes, adopting a role through which to derive undue authority. The Duke abuses the privilege of his knowledge, grandly declaring that he has in fact saved Claudio’s life. He is not only doing his duty as a ruler, but creating a public performance through individuals’ repentance and grief.

It cannot be denied that the Duke is a consummate actor and director, drawing the appropriate performances from everyone and single-handedly achieving justice for all. But it must be remembered that he does much of this in order to bolster and secure his own position and notably, Isabella’s hand in marriage- an audacious request from a man posing as the protector of her chastity. The playwright manufactures the superficial happy ending through this character’s manoeuvring, but tactical proposal to Isabella in her vulnerability and relief at her brother’s survival, casts more doubt upon his character.

The suggestion that Isabella should repay the services the Duke did her freely, through her willing acquiescence to marriage, is tantamount to the blackmail attempt that Angelo also demanded from her. Significantly the playwright avoids Isabella giving the Duke an answer. Also in the concluding scene, the Duke sentences Lucio to marry the prostitute that he got pregnant, not because it is his moral obligation, but because Lucio “slander[ed] a prince. ” This seems like a punishment to allay the Duke’s ego, rather than the sake of justice.

The Duke modestly claims not to like the people’s “loud applause and aves vehement” yet considering his immaculately times and contrived arrival at the end of the play, it is likely that he set himself up for this purpose, to gain more acclaim. Indeed, the Duke gains stature throughout Angelo’s repressive rule, as many wish to have him back, realising how fortunate they were with his leniency before. If the Duke felt true empathy for the people whom he has led astray through weak rule, he would not then abandon them.

There is a famous saying, “A Captain goes down with his ship” and in the same way, the Duke should bear the troubled times of his city and then bring it back to a morally acceptable standard, instead of delegating it to someone else. In contrast, although the piety of her character restricts her, Isabella is a far more selfless character than the Duke, offering to sacrifice her life for Claudio, instead of her virginity. In accordance with her religion, this does not make her self-centred but wise.

Many of the protagonists in this play seem more motivated by their own integrity than upholding the law of the city- much of it which is archaic and unjust itself. But without the Duke’s manipulation of people and events, Claudio would have died, Angelo would have remained unexposed, and Mariana would not have gotten married. Justice depends upon the Duke’s machinations and manipulations within the play. That cannot be denied, however self-serving his actions may have been.

The principal characters in 'Measure for Measure' are motivated by personal gain. (2020, Jun 02). Retrieved from https://studymoose.com/principal-characters-measure-measure-motivated-personal-gain-new-essay 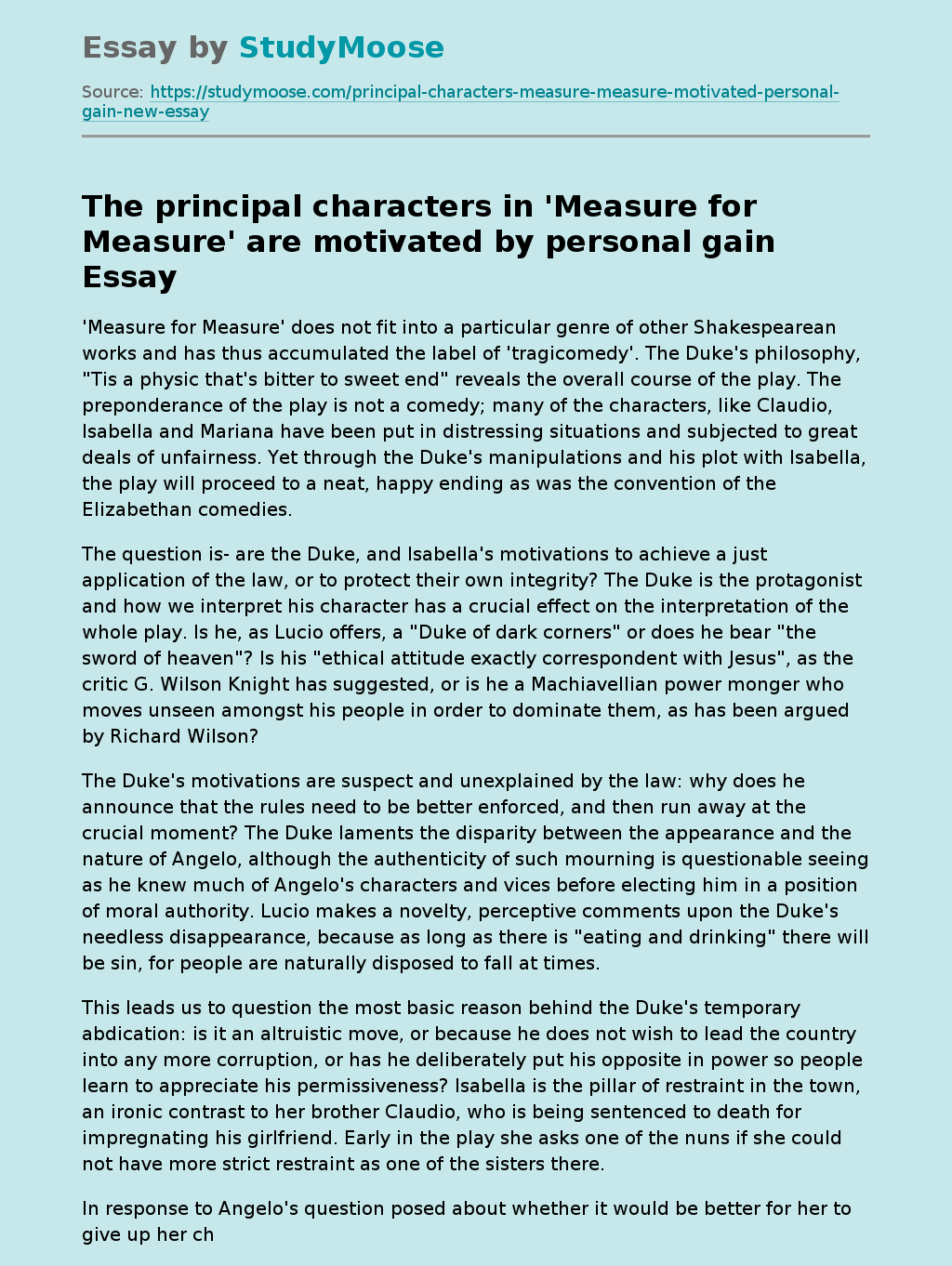