Poverty is a dangerous weapon that can hinder the growth and development of any society, where it is prevalent. Poverty in Africa has contributed to the spread of preventable diseases, the exploitation of woman and children, violent conflict over scarce resources and political instability. It is important that the world community not only acknowledges the reality of poverty in Africa, but nations and individuals should focus their energy and resources to do something about it. With poverty being so high in Africa it is hindering production and economic development.

Don't use plagiarized sources.
Get Your Custom Essay on Poverty in Africa Just from $13,9/Page

Africa is the world’s second-largest and second most populous continent. As well as the world’s poorest inhabited continent, as measured by GDP per capita It accounts for about 14.72% of the world’s human population. In 2006, 34 of the 50 nations on the United Nations list of least developed countries are in Africa. Many nations in Africa, GDP per capita is less than $200 per year, with a majority of the population living on much less.

There is 64% population live in rural areas, and a 2.5% annual population growth. Because of the poverty in Africa it is causing a chain reaction, which is hindering Africa’s productivity and economic development.

One of those chains being health, 90% of all malaria cases are in sub-Saharan Africa. 3,000 children under the age of five die each day from malaria in Africa. 1-5% of GDP in Africa covers costs of malaria control and lost labor days. 17 million people in Africa have died of aids. Incidents of malaria, cholera and even polio are on the rise in Africa, all undermining social and economic development on the globes most impoverished continent. Along with health being part of the chain comes education. 62% of children in Africa do not complete primary school. 19 nations in Africa are under 50% literacy rate. Illiteracy is said to be one of the many causes of poverty in Africa. –

Poverty creates ill-health because it forces people to live in environments that make them sick, without decent shelter, clean water or adequate sanitation. Some illnesses which have been eradicated from the developed world and others parts of the globe keep recurring in this continent. Rates of HIV/AIDS, malaria, polio and various other diseases are highest in this region(Cooper, 2012). About 34% of the population in Africa suffer from malnutrition. 1 in every 6 children dies before turning 5 due to malnutrition and starvation. With those statistics Africa is going to continue to suffer in poverty.

With people Africa dying it is causing productivity to slow down due to some many deaths. The people of Africa are not able to afford the proper healthcare needed to stay alive, which is hurting not only the economy, but the families that are continualy losing their loved ones to disease that can be preventable. The spread of diseases like HIV/AIDS, malaria, etc keep increasing in Africa as a result of poor health facilities that are put in place for the control of such diseases. Most families are poor, and cannot afford going to good hospitals where there are better drugs and equipment that will help to improve their health condition.

Inability of getting proper healthcare lead to premature deaths in Africa on a daily basis. With health being so bad in Africa it is preventing the increase of production. With people out sick and/dying productivity goes down as well as worker per capita. By the governenment improving healthcare and maiking it more accessable to more people who can’t afford healthcare could help improve their productivity and increase development. (poverty, 2009) By eraticating poverty it will help increase the health of the people in poverty which will intern increase the productive and economic development. Its not onlt health that is preventing Africa from overcoming poverty, education has a huge part to do with it as well.

This graph shows the large differences in school attendance between rich countries and the countries in Africa. How can we expect Africa to escape from poverty if this doesn’t change? But of course, this is a vicious circle the main reason for children not going to school is precisely poverty. The poverty of the families in those countries is making it impossible for them to send their children to school, and the poverty of the state as the authority responsible for providing education. (spangnoll, 2008). With those numbers being so low economic development and productivity will never increase. The government needs to start providing funds to not only increase the number of students in primary school, but secondary and post secondary school.

Although many African leaders have stated that there are limited resources to educate their people, Dambisa Moyo has stated that “there is more than $1 trillion in development aid that has been transferred from rich countries to Africa over the past 50 years, then this money, coupled with the continent’s own resources, leave no reason for Africa to remain one of the most illiterate continents.” The African leaders recognize that education is important, but things remain the same, especially for girls in Africa who are often denied education altogether. If education continues to be put on the back burner the continent will continue to lag behind in human development. To fix this this problem all African countries must provide free and compulsory education at least at the elementary and fundamental stages, as required by the Universal Declaration of Human Rights also known as the UN (Kaifala,2011).

The first thing that needs to be done to eradicate poverty in Africa to increase production and economic development is to one achieve universal primary education. By at least offering universal primary education will kids an opportunity to learn and receive an education could potentially encourage the kids further their education in secondary school or post-secondary school. Another thing that needs to be accomplished to reduce the poverty rate in Africa is reducing the child mortality. Thirty years ago, one in five children in the world died before their fifth birthday. Now it is less than one in ten. Better access to vaccinations and other basic health services and improved living standards have contributed to a steep decline in global deaths among infants and children over the past 30 years.

By reducing the child mortality it would increase productivity and increase economic development. As long as Africa continues to offer vaccinations and other basic health services they will continually be contributing in the plan to eradicate poverty. Ensuring environmental sustainability is another way to eradicate poverty in Africa. Some of the poorest people in Africa depend on Natural resources for a healthy diet, water, shelter, and medicines. This means these people are often more vulnerable to disasters and hazards such as flooding, landslides and pollution brought about or exacerbated by environmental degradation. By ensuring environmental sustainability it ensures that the government will help the people out in coming up with ways to avoid damages and losses during an environmental degradation.

The next thing that Africa needs to do to eradicate poverty out of Africa is to develop a global partnership for development. “The targets in the global partnership for development millennium development goal include a fairer trading and financial system. Getting rid of barriers to trade could lift almost 300 million people in the developing world out of poverty (poverty, 2012). By accomplishing these things it will not only help to eradicate poverty, but to also increase economic development.

Achieving these goals doesn’t just happen over night it takes time, and the participation of the communities as well as the government in Africa. Although there is a lot that needs to change in Africa to eradicate poverty to increase productivity and economic development Africa has already begun to try and make a change. With programs like the United Nations Millennium Development Goals, which aims to cut poverty statistics in half by the year 2015, Africa is headed on the right track to come out of poverty.

Over the years there has been some great progress to eradicate poverty, which is helping productivity and economic development in Africa. Although it has been small changes everything adds up. IN the last five years, Mozambique has reduced poverty from 70% to 55% and has doubled the number of children in school. Kenya has introduced free primary education, which has brought 1.2 million children back into school. Along with those accomplishments Uganda has reduced HIV from 20% in 1991 to around 6.5% in 2001. As well as 1,000 new schools have been built and 18,000 teachers recruited to teach in Tanzania. With this accomplishments so far there is no telling how much better Africa will get with the continued work that is being done to eradicate poverty in Africa to increase productivity, and economic development. 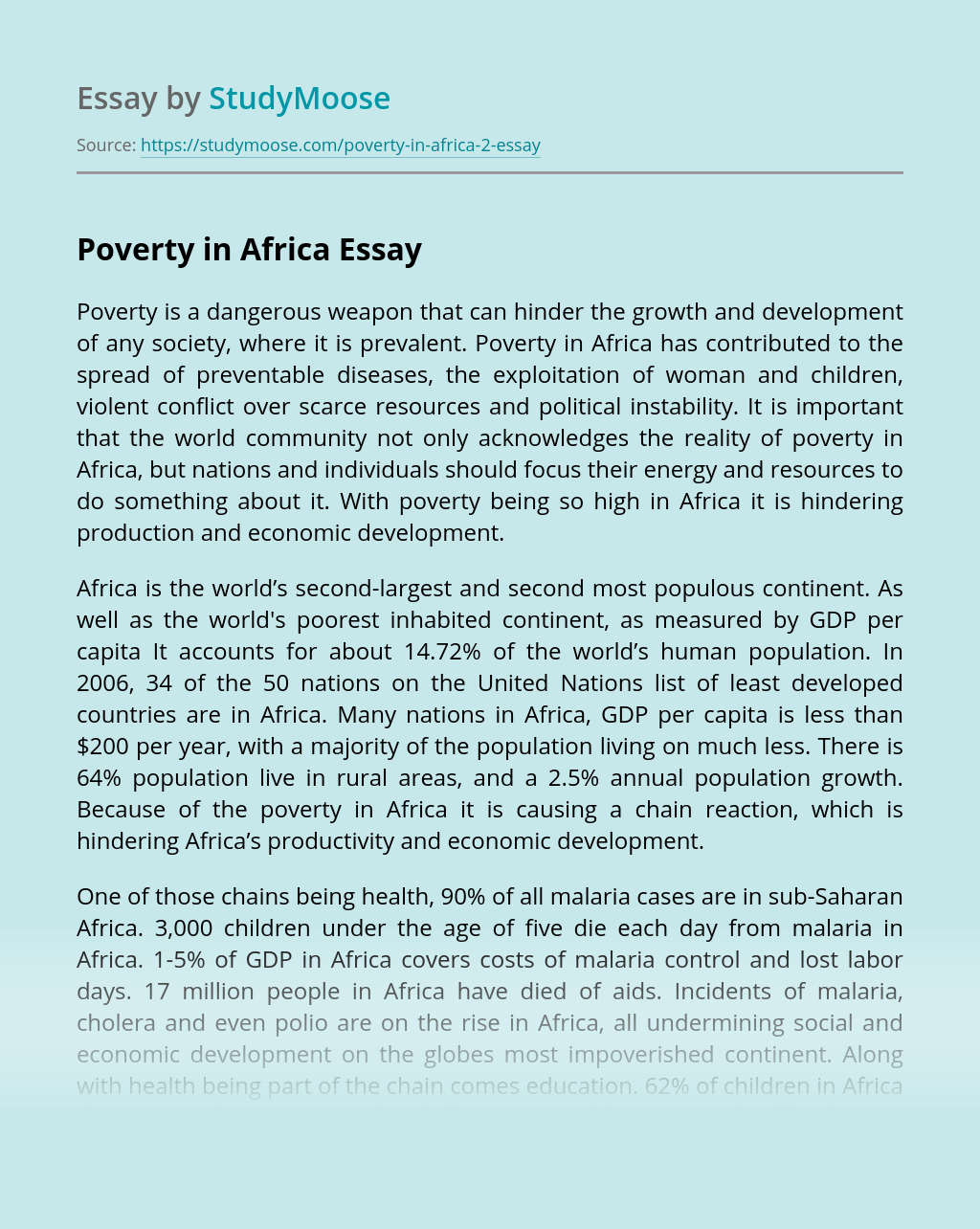 Review of related studies on library service in the Philippines

Library has increased with the complexity of our society. The rapid growth of technology has meant that many gadgets and equipment have appeared and continuous progress of the world the help of the Science and Technology. Library is considered the heart of the school it is expected to be taken care of for its normal... VIEW ESSAY

Arthur Millers play, A View from the Bridge, follows the story of the Carbone family and the troubles which ensue after the arrival of Marco and Rodolpho in the patriarchal Red Hook, New York. Throughout the melodrama, the relationship between Marco and Eddie develops as masculinity and honour gain importance. At first, the relationship is... VIEW ESSAY

In the lay Bisclavret by Marie De France she tells the short story of a failing marriage. there’s a baron named Bisclavret who has this uncontrollable curse that makes him turn into a werewolf for 3 nights a week . His wife who was unidentified harasses him into revealing everything and repays him for his... VIEW ESSAY

The movie The Book of Eli directed by the Hughes siblings is a cinematic screen of dystopian genius. Lots of dystopian films review federal government participation, personal privacy issues, and ethical concerns. However in The Book of Eli, the Hughes brothers take a dive to a different part of modern-day society: religious beliefs. Various faiths... VIEW ESSAY

Abstract Developments in the world throughout the years have greatly impacted the world in various ways. These developments include technological and socio-political changes. These changes have made social activities today to become incomparable with those from a hundred years ago. Don't use plagiarized sources. Get Your Custom Essay on Poverty in Africa Just from $13,9/Page... VIEW ESSAY