Poverty As A Cause Of Crime

Poverty remains a critical social problem that needs to be addressed. Philippines’ poverty line marks a per capita income of 16,841 pesos a year. According to the data from the national statistical coordination board, more than one-quarter (27.9%) of the population fell below the poverty line the first semester of 2012, an approximate 1 per cent increase since 2009. This figure is a much lower figure as compared to the 33.1% in 1991. The unevenness of the decline of poverty has been attributed to a large range of income brackets across regions and sectors, and unmanaged population growth.

Don't use plagiarized sources.
Get Your Custom Essay on Poverty As A Cause Of Crime Just from $13,9/Page

The Philippines poverty rate is roughly the same level as Haiti. The government planned to eradicate poverty as stated in the Philippines development plan 2011-2016 (PDP). The PDP for those six years are an annual economic growth of 7-8% and the achievement of the millennium development goals (MDGS). Under the MDGS, Philippines committed itself to having extreme poverty from a 33.1% in 1991 to 16.6% by 2015.

The most popular view is that crime is a category created by law. Poverty and crime have a very intimate relationship that has been described by experts from all fields, from sociologists to economists. The UN and the World Bank both rank crime high on the list of obstacles to a country’s development. This means that governments trying to deal with poverty often also have to face the issue of crime as they try to develop their country’s economy and society. In the countries where social discrimination factor isn’t very strong, results have shown that less education meant more criminal offenses ranging from property to casual theft and drug-related offenses. It appears that in fact, poverty itself more tied with violence, criminal damage and also drug use- as a catalyst to violence. There are huge consequences of this kind of research for public policy and the positive impact of keeping children in school and reducing poverty.

Poverty As A Cause Of Crime. (2016, May 05). Retrieved from https://studymoose.com/poverty-as-a-cause-of-crime-essay 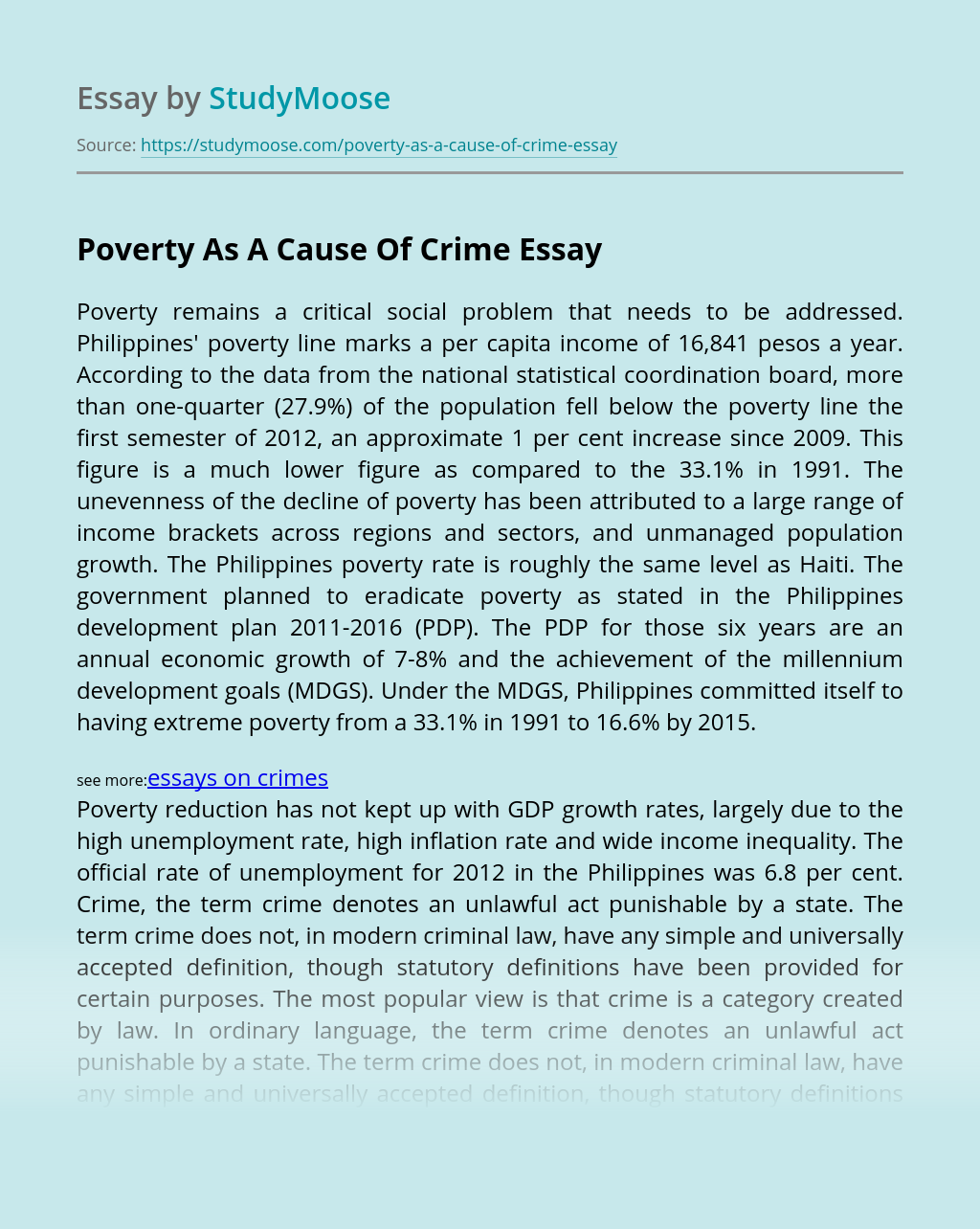 Rate this post Many contemporary macro-level theories of criminal behavior and empirical tudies pf crime rates address the relationship between economic factor and crime. Relationship between economic circumstances such as wage inflation and unemployment to criminal activity is the main subject matter of this study. Wage inflation and unemployment taken as predictors of crime rates....

Rate this post I believe that the authors of this article mean by “dream divide” is that the distribution of income and wealth in the United States have become more unequal, which make those living in poverty have an even smaller chance of reaching their American Dream. There are many reasons why the poor people...

Get Essay
Hopelessness and Poverty in This Nation

Rate this post Opportunities in America, especially for those who have minimum wages and big families to support, are very limited. Jonathan Kozol presented a speech about poverty in America. In this, he talked about his experiences staying in a homeless center in New York, one of the wealthiest places in the nation, and how...

Effects Of Immigration On The Us Economy Economics

Rate this post The success of America over the centuries has been helped enormously by immigrants into the country. However, immigration is now a very controversial issue in US. Many of the immigrants working in the country at the moment are illegal, for example, workers who have come over the border from Mexico. These immigrants...

Rate this post Microeconomics is generally the study of individuals and business decisions, macroeconomics looks at higher up country and government decisions. Macroeconomics and microeconomics, and their wide array of underlying concepts, have been the subject of a great deal of writings. The field of study is vast; here is a brief summary of what...

A Study of the Microfinance Institutions

Rate this post One factor inhibiting the attainment of development goals in less developed countries is the populace’s general inability to access factors of production, especially finance. This limits the entrepreneurial ability of the people, especially the poor. Consequently, potential employment opportunities and household prospects for creating wealth and improving income are lost. Microcredit has...

Homeless and Poverty within Our Society

Rate this post The homeless live in tents, on benches, under bridges, alleys, box-cars, abandoned homes, and shelters to name just a few. I personally have met individuals who choose or have not chosen that method of living and have offered my home with a few of them over the years, when the nights are...

Rate this post Can you imagine not knowing where to sleep for the night on a daily basis?, or wearing the same clothes everyday?, worse even being unable to clean yourself and having something to eat every now and then?. Homelessness is a major issue worldwide, as you can see it almost anywhere ranging from...