To what extent does poverty cause social exclusion for older women?

It is well known that women generally outlive men. Therefore women outnumber men in old age by more than 2:1 over the age of 75 – so clearly retirement and old age are very much issues for and about women. (Fennell et al 1988: 97)

What is Social Exclusion?

Social exclusion covers such a wide range of issues that it is difficult to define. Definitions of social exclusion usually describe how and why it occurs as well as its implications.

The term became popular in the late 1980s and was used to describe the results of the radical economic, industrial and social changes that were taking place in France and elsewhere in Europe.

Don't use plagiarized sources. Get your custom essay on
“ To what extent does poverty cause social exclusion for older women? ”
Get custom paper
NEW! smart matching with writer

These included long-term or repeated unemployment, family instability, social isolation and the decline of neighbourhood and social networks. Social exclusion was seen to be the outcome of two strands: separation from employment and separation from social relations, particularly the family.

The European Union (EU) adopted the term but widened the definition, noting that social exclusion occurs when people cannot fully participate or contribute to society because of “the denial of civil, political, social, economic and cultural rights”.

Definitions also indicate that it results from “a combination of linked problems such as unemployment, poor skills, low incomes, poor housing, bad health and family breakdown'”.

In summary, social exclusion occurs as a result of shortcomings and failures in the systems and structures of family, community and society. (nacro.org.uk: 2003)

A Link Between Gender and Poverty

Old age tends to be seen as stigmatising and indeed is constructed as such in social and economic policy.

Elderly people as a social minority are rendered economically dependent and this is legitimated by reference to the idea that biological ageing is synonymous with physical and mental deterioration. However, older women are subject to sexist as well as ageist treatment and for them as individuals a major issue is how to maintain their sense of positive self-identity in the face of potentially stigmatising experiences of daily life. (Fennell et al 1988: 105)

Female single pensioners are one of the poorest groups of the older population, and currently nearly a quarter live in poverty. The combination of racism and sexism makes Black and Minority Ethnic women particularly vulnerable to poverty. The link can be seen in the high rates of poverty among female-headed households. 53% of all lone parent families are poor. (nacro.org.uk)

Women are more likely to experience persistent poverty. More than a fifth (22%) of women have persistent low income compared to 14% of men. Living in poverty denies women the opportunity to build up savings and assets to fall back on in times of hardship. This effect accumulates for older women and results in extensive poverty.

64% of people living solely on state pensions are women. However some women are not entitled to state pensions because their National Insurance contributions are insufficient due to family/childcare interruptions which have resulted in their pay being under the qualifying limit. Even where the women have had jobs they are more likely to have been part time, not as well paid and for companies that are less likely to provide pension schemes. (BBC.co.uk)

An Overview of the Country

There are 6.5 million one-person households in the UK. Nearly half of these are one-pensioner only households and three quarters of these (2,366,000) are occupied by a woman living on her own. It is estimated that more than 383,000 pensioners do not have central heating and 21,000 do not have sole use of a bath or shower and toilet. Three quarters of these numbers being women. More than half of all pensioners living alone have a limiting long-term illness. (National Census, 2001)

Being poor is an exclusion from society in itself. Poverty prevents basic social activity. Travelling becomes difficult. Few women over the age of 75 can drive owing to them being born into an era where women were not encouraged to be self-reliant and were expected to have their husbands take care of them. Even the few that can drive are lucky if they can afford to own and run a car.

There is also a stigma attached to being poor. It is embarrassing. Many poor older women hold the view that they are not worthy of money, these are the women whose mothers and grandmothers were domestic servants. They have grown up in poverty, lived their adult lives in poverty and never had the encouragement or the opportunity to save for a comfortable retirement.

Whilst women can expect to live longer than men, they experience more ill-health in their lifetime. Women’s ill-health stems from their increased vulnerability to poverty, as well as to childbearing and old age.

Department of Health research has shown that women from poorer backgrounds are 3 times more likely to contract cervical cancer than those from more affluent homes. Diet and smoking are factors – a low consumption of fruit and vegetables leads to speedier tumour growth and women from low income households are more likely to smoke.

Women living in low-income households report higher levels of stress and anxiety than men. Women explained their stress as being linked to – being unable to provide fully for their children; the burden of constantly having to prioritise and reprioritise spending; the need to exercise vigilance and restraint over themselves and their partners, and feeling ‘blamed’ when they admitted their ‘failure’ to make ends meet.

One third of women taking part in a research study were terrified of the repercussions of being in debt. Tears and sleepless nights were common among women worried about making ends meet. And as a result of these factors women are more likely to be admitted to psychiatric hospitals for depression and anxiety than men.

As we have seen with poverty health matters are cumulative. A lifetime of poor diet, stress, smoking and sub-standard health care takes its toll on a woman in her old age.

Limiting long-term illnesses are often the cause of isolation for older women. It becomes difficult for them to get around easily. With the hustle and bustle of most towns and shops, a feeling of vulnerability manifests and they no longer feel safe. This leads to them not going out and not going out increases their feelings of helplessness, leading to increased isolation and an inability to participate fully in society.

Is there a solution to this exclusion?

In October 2003 the Government introduced the new Pension Credit which will guarantee a minimum income of ï¿½102.10 a week for single pensioners and ï¿½155.80 for a couple. However this is a means tested benefit and many don’t realise they can claim it.

The Government has acknowledged that women are more dependant than men on the state pension for their retirement income but far fewer build up a full national insurance record in their own right.

A spokesman for The Department for Work and Pensions said it was ensuring that pension reforms improved women’s pension rights. He said that they had already introduced a range of policies that directly benefit women in four key areas: First in helping women into employment to build up pension rights, second in helping lower paid women, third in helping existing pensioners with improvements to the state system and fourth helping to ensure that women are aware of their pension position and the choices that they face.

In common with any other population group, the majority of health problems of ageing women are readily seen to stem from economic, social, cultural and political factors, as well as biological factors.

The one defining answer to promoting good health is; Prevention is better than cure. Stressing the health benefits, over a life time, of not smoking, a good varied diet, attending screening for cervical and breast cancer and promoting exercise will help future generations.

For older women who are already suffering the effects of poor health more support should be offered in the form of administering medication, diet, and transport to clinics and hospitals for appointments

To what extent does poverty cause social exclusion for older women?. (2020, Jun 02). Retrieved from https://studymoose.com/extent-poverty-cause-social-exclusion-older-women-new-essay 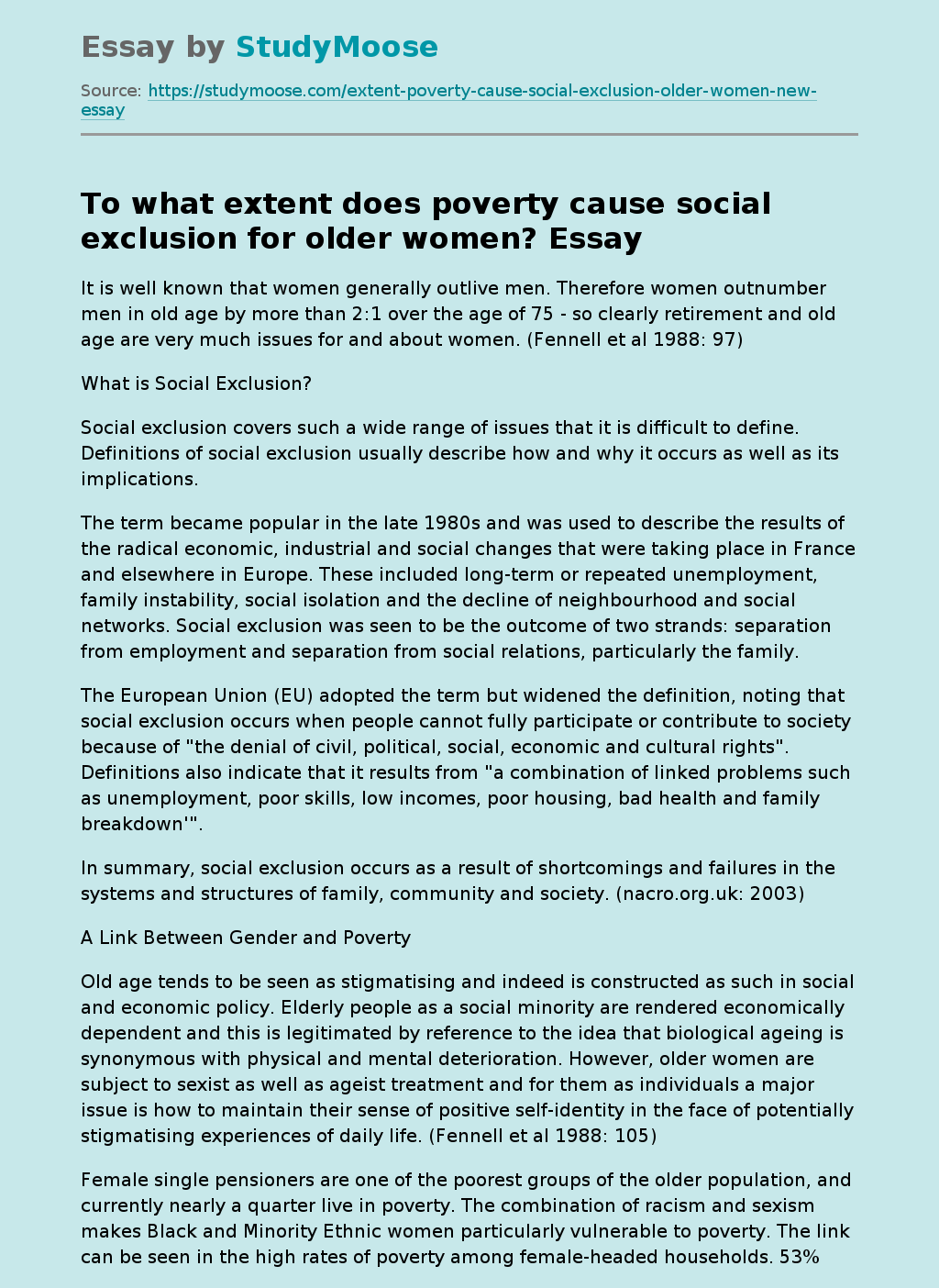