Kurt Vonnegut’s Cat’s Cradle is a dystopian novel that begins with the narration by a writer named John, or Jonah, as he asks to be called. John plans to write a book about the day the atomic bomb was dropped on Hiroshima. The name of the book is The Day the World Ended. In order to start the recollection of the events that happened that day, he needs to research about the Hoenikker family since Felix Hoenikker was a physicist that collaborated with the creation of the atomic bomb.

Don't use plagiarized sources. Get your custom essay on
“ Postmodernism in Vonnegut’s “Cat’s Cradle” ”
Get custom paper
NEW! smart matching with writer

However, he passed away, which is why John writes a letter to Newt Hoenikker. The Hoenikker family consists of Felix, Emily, Angela, Frank and Newt, but only the last three remain alive. In his letter, Newt explains that Felix was more interested in science than in people. As the story progresses, John travels to Ilium to continue researching for his book. During his research, John meets Dr. Asa Breed, former supervisor of Felix.

John finds out about the existence of ice-nice, a substance that turns liquid into ice, a creation by Felix Hoenikker. Later on, John travels to the island of San Lorenzo, where he meets different characters such as “Papa” Monzano, the dictator of the island. In San Lorenzo, everyone is a believer of the religion of Bokononism. Finally, the different events that take place in the island lead to “Papa” Monzano taking ice-nine, which provokes all the water of the world to freeze. Only a few survive this event, among those are John, Frank, and Newt, and Bokonon, the creator of Bokononism.

One of my reactions to the novel was the attention and dedication that some characters gave to science. Characters such as Felix Hoenikker and Asa Breed believed science was the most important thing. They also believed that knowledge was essential to solve problems: “The trouble with the world was. . . that people were still superstitious instead of scientific. He (Asa Breed) said if everybody would study science more, there wouldn’t be all the trouble there was” (Vonnegut 17). As we studied in class, throughout time, people deal with faith differently. For instance, Native Americans believed in different deities, and they also believed in Nature. Whereas Transcendentalists believed in the individual and being self-reliant. In this case, Asa and Felix believed in science: “Nothing generous about it. New knowledge is the most valuable commodity on earth. The more truth we have to work with, the richer we become” (Vonnegut 26). In the last quotation, Asa Breed implies that by acquiring more knowledge, the lives of human beings become better. However, it seems to me that Asa Breed and Felix Hoenikker only care about personal gain and not the collective wellbeing of human beings. On the contrary, they do not care about the possible consequences that science can cause. Felix is a great example of showing no remorse whatsoever for the tragedies that bomb explosions cause. Newt explains Felix’s lack of empathy in his letter to John. Newt tells John about the day when the bomb at Alamogordor was first tested: “a scientist turned to Father and said, ‘Science has now known sin.’ And do you know what Father said? He said, ‘What is Sin?” (Vonnegut 13). The last quotation evidences Felix’s mindlessness regarding the effects of scientific inventions. To me, science does more damage than good in the novel. Scientists exploit science, and they end up creating more problems for the human race than solutions. Additionally, these same scientists are more concerned with gaining more knowledge than prevent or solve the problems they have created.

Another element of the story that caught my attention was the depiction of religion. Bokononism is to the citizens of San Lorenzo, what science is for Asa Breed and Felix Hoenikker. To me, it was very interesting to see why Bokononism was important for people. Bokononism gave them lies to believe in, instead of truths. Bokononists prefer to believe in lies that make them feel better about themselves than acknowledge their reality. Bokononism seems to work as an escape from the harsh reality. This religion keeps on providing its followers with lies that give them hope. In a way, Bokononism is only a temporary comfort and illusion. I think the idea of Bokononism as a temporary comfort can be compared to what people do to escape from the harsh reality in the world today. Many people follow a religion to cope with the hardships of life, to find support and strength. Others consume toxic substances such as drugs or alcohol to avoid the problems in their lives; whereas some practice sports, create art, or follow musical artists in hopes of finding motivation and happiness. I think the idea of Bokononism is discouraging since it thrives on feeding people lies. Also, blindly believing in something such as Bokononism without questioning some aspects of it is dangerous. In my opinion, the fact that some of the practitioners of Bokononism lack critical thinking is frustrating. For example, it was very disappointing when many civilians decided to commit mass murder because Bokonon ordered them to. Instead of having hope and trying to survive, they mindlessly decided to commit suicide. Nevertheless, since life is indeed cruel sometimes, I understand why people find solace in Bokononism.

The pursuit of happiness is another aspect of the novel that I found interesting. Most of the characters seem to be in the pursuit of happiness, even though happiness means something different for each character. For instance, Angela desperately wants to find someone that loves her. She is looking for someone to marry since she feels alone due to her family drifting apart. However, her pursuit of happiness fails after she marries someone who does not love her. Angela marries Harrison Conners, who only wants to get his hands on the ice-nice that she has. Angela does not have a chance to find someone else to love because she dies as a result of ice-nice. Newt’s pursuit of happiness is very similar to Angela’s. He is also looking for love, and he thinks he finds it with Zinka. Nonetheless, Zinka betrays Newt and steals the piece of ice-nine that is in his possession. Newt’s hope for love is also pointless since among the survivors, there is no one he is interested in. In Frank’s case, he wants power. He uses ice-nine to obtain power in San Lorenzo, which ultimately leads to the destruction of the world. Thus, each of the Hoenikkers fails in their pursuit of happiness. I think the search of happiness in the novel is comparable to how human beings try to be happy. Ultimately, everyone is trying to be happy. Sometimes, however, people make mistakes in this quest, just like the Hoenikkers. I believe it is very usual for people to make the same mistake Newt and Angela made, since human beings are constantly trying to find love. In addition, I believe it is interesting how despite of getting what they wanted, none of the Hoenikkers actually found happiness, which is alike to what happens in real life: people obsess over something, only to find out it was not what they expected.

To conclude, I would recommend Vonnegut’s novel to people who are interested in dystopian works that cover themes such as science, religion, and pursuit of happiness that truly make one think about how human beings deal with these topics. I believe Vonnegut makes a great job of addressing controversial subjects regarding the state of the world and humanity. In a way, I also think Cat’s Cradle is a warning about what could happen to the world if people keep fighting for its control. 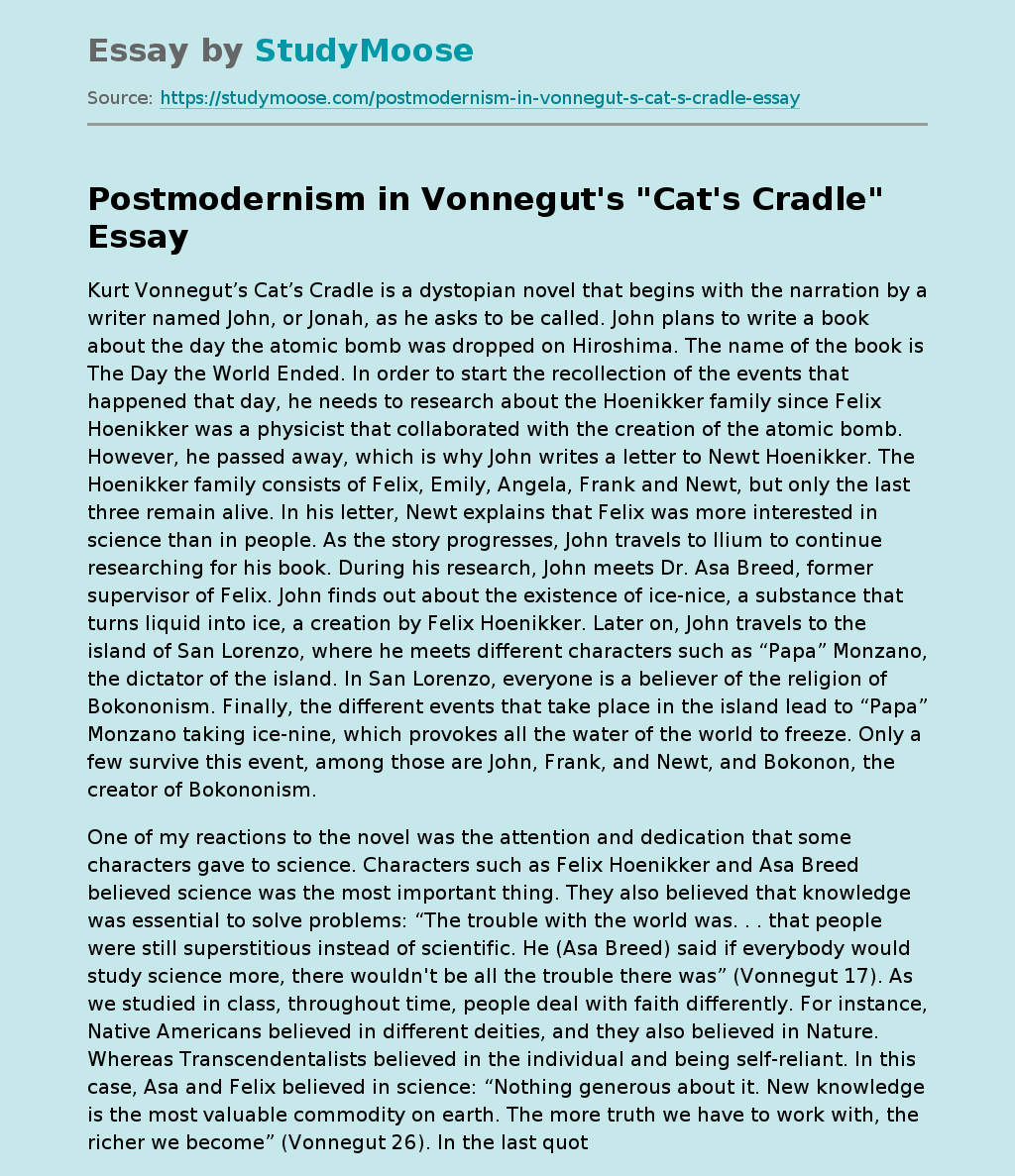