Is there a need for media men/journalists?

With the rise of blogs and other means of spreading information, the role of journalists becomes undefined. Is there a need for media men/journalists when everybody can very well disseminate information as easily as opening a lap top? Since technology has made it possible to spread information easily, does this make everyone a journalist? For us to fully comprehend the changes of the definition of journalism, it is a need for us to discuss who is a journalist before the advent of the internet, more specifically, before there were blogs.

Don't use plagiarized sources. Get your custom essay on
“ Is there a need for media men/journalists? ”
Get custom paper
NEW! smart matching with writer

From the Latin word “diurnalis”, journalism is a daily record of events.

Their existence is further magnified by the use of fedoras that may seem standard for journalists in the late 50’s. However, digital technology brought an end to the stereotypes of journalists. With their executive attire they come with just a palm top or a cellular phone, this eliminates the usual pen and paper.

They can be anybody, just one of the everyday mobs. Since we cannot determine a journalist through what he wears, then we must look at the person behind the fedora, the pen and paper, the gadgets and the camera.

This then leaves us with the person himself. We mentioned earlier that journalist put much value on credibility. Perhaps this is the answer to our question. Among the ethics of journalism such as truthfulness, non partisan, objectivity, timeliness, and accuracy, they emphasize on credibility. This defines their being.

Journalism is much more than just spreading information, it is at the very heart of a journalist to stand by the information that he has given. However since the media capitalizes on information, we can never eliminate the fact that certain information are manipulated for personal interest or for ratings and paper sales. Capitalists often utilize the media to exploit information and gain profit from it. High ratings would mean higher advertisement fees and greater budget for the program or newspaper. A bloated rating is equivalent to a bloated paycheck. This competition for rating gave rise to yellow journalism and sensationalism.

This is the ugly side of the media. History has witnessed the exploitations of media in various political scandals, mischievousness of certain actors, murders, hostage takings, natural disasters and etcetera. They capitalize on these scandals to gain readers interest and patronage. In depth analysis of rumors and scandals are given more emphasis than national issues. Political scandals are not a so much of a big deal for the past years. But still, it most overwhelms us. In American society where there is a high respect for authorities, it comes as a shock for us whenever the media pays big attention to it.

Media can build or destroy a person. In times where issues such as political scandals arise, the media consider themselves responsible in informing the people every angle of the story. And, as information-hungry and curious that we are, most political scandals that we are keen on anticipating are the kind that involves the authority’s sexual innuendos—or more popularly known as political sex scandals. Product endorsements are literary the main source of income of TV shows and even the papers. This only shows us that the media as an institution is greatly utilized by capitalists as a tool for commercialism.

The media can serve the interest of different entities and it can delineate from its ideal functions which was cited by Harold Lasswell in his book Role of the Media (1971). He described the three basic functions of the media as:

Laswell’s three functions of the media can be summed up by the term cultural hegemony- a sociological sense occurring when the ideas and values of the dominant members of society are imposed on the less power members of society.

Even in his definition of the role of the media it is evident that the media is a powerful tool. They can either be a drag or a midwife to change depending on which side they choose. Perhaps a trend in the beginnings of mass media in every country is that the pioneer press was mostly government sponsored or subsidized. As in the case of Australia which began as an agency of the press government having the politicians as the shareholders (Schult, 1988). Political officials have a say on what the press write about, thus, they control the flow of information.

This whole charade of frenzy is not about “how much of an effect or what kind of effect media has on politics” but moreover, the effects of politics on the media. (Stoutenborough, 2007) Media sanctions and violations of press freedom were rampant in those days. But since the ownership of the four estates (newspapers, tv, radio, and magazines) were transferred to private individuals, the shift of scrutiny from the media shifted from those who opposed the government officials to the government itself. This gave way to the other function of media and that is the watchdog of the government.

Is there a need for media men/journalists?. (2020, Jun 02). Retrieved from http://studymoose.com/political-scandals-340-new-essay 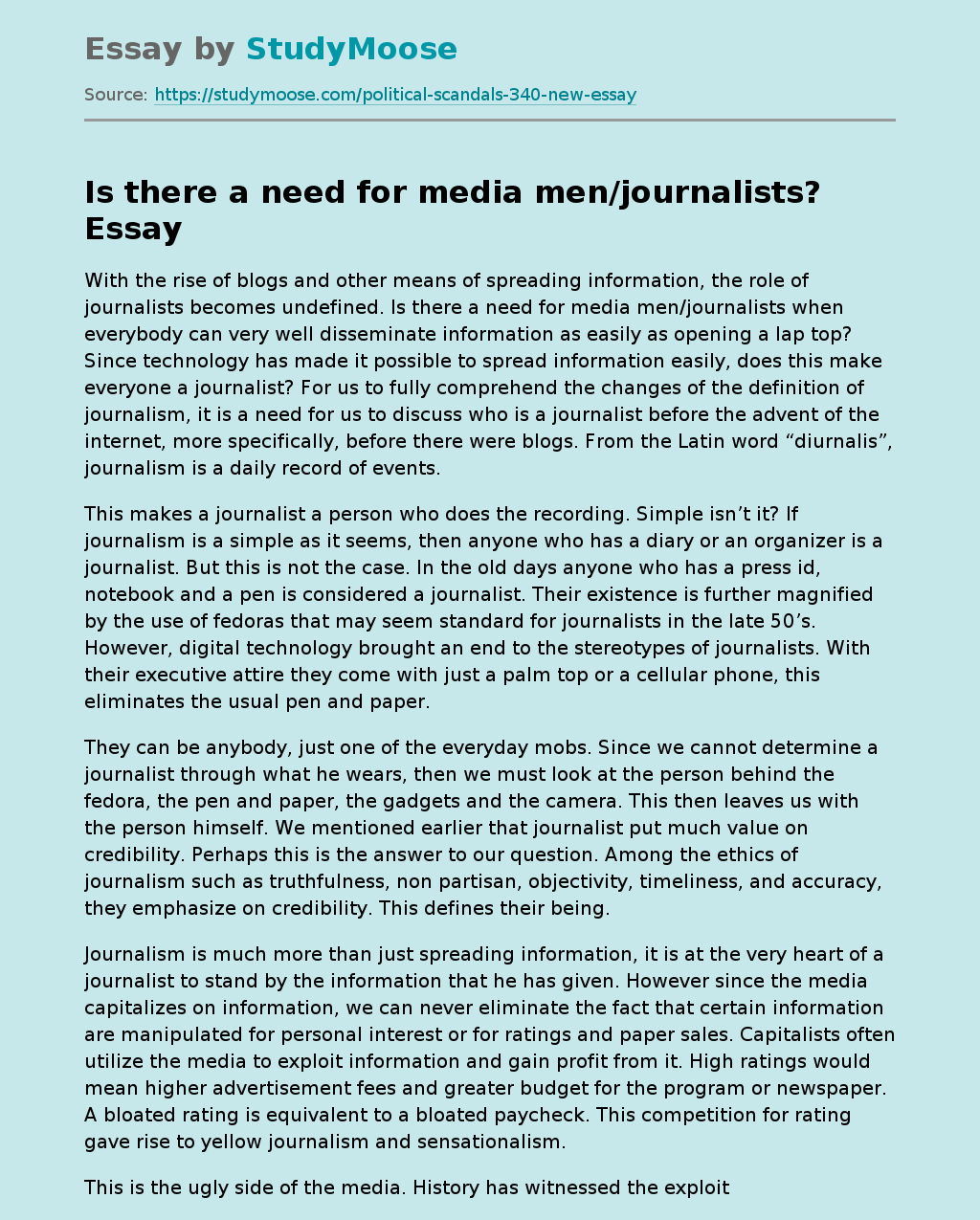