In the poem “To An Athlete dying young” Alfred Housman praises a young and famous athlete for dying before he became old and forgotten. As the title suggests this poem is, in some ways, an elegy because it is directly written “to” a person who is not named. This poem considers that a young person’s death should be seen as a way to avoid watching their glory fade away. Housman delivers his message of death being a form of escape with his usage of literary devices such as tone, alliteration, meter, rhyme, as well as many others.

Don't use plagiarized sources. Get your custom essay on
“ Poem Essay – To an Athlete Dying Young ”
Get custom paper
NEW! smart matching with writer

The poem starts off with a very joyful and care-free tone, as the town is celebrating the victory of a man from their hometown. This joyful tone continues throughout the first stanza with Housman’s use of diction such as “chaired”, and “cheering”. The use of these techniques displays the theme of glory only going to the most recent winner since the first stanza is describing the joy of the town just after the man won his race.

Proficient in: To An Athlete Dying Young

In the second stanza, the tone starts to shift, becoming more melancholy and sad. This is expressed with the use of the phrase, “the road all runners come”(L.5) which is a metaphor for the road to the cemetery that everyone “all runners” will eventually go down. There is also alliteration with “road” and “runners” which gives both of those words a punch, adding to the previously mentioned metaphorical road. Also in this stanza, there is a use of repetition between stanza one with the phrase; “Shoulder-high” in (L.

4), and (L.6) in the second stanza. This phrase is meant to draw a parallel between when the runner was carried by the townspeople after he won the race and when he is later carried to the graveyard in a coffin. At the end of this stanza, Housman includes a very blunt image of death where he says: “Townsman of a stiller town”(L.8). This imagery implies that the man is living in a town of dead people. The overall importance of this stanza is to explain that the young man died and to mourn his death.

The third stanza has a lot of soft “s” sounds in it which create a feeling of calmness and stillness. This arouses a picture of townspeople mourning the death of their hero. The theme of glory comes up again in this stanza where it says “from fields where glory does not stay” (L.10). Fields are a symbol for victory and defeat because when a field blooms in the spring then it is victorious and when everything dies in the fall the field is defeated. This fluctuation of seasons is a metaphor for how fast people change their views of who the hero is. Another important symbol in this stanza is the use of laurels and roses to captivate what glory is like, “And early though the laurel grows It withers quicker than the rose”(L.11-12). This phrase clearly represents the fleeting life of glory as it quickly withers away and is forgotten. This shows the hidden meaning of this poem; a persons’ accomplishments or glory will soon be overshadowed by others. The wise thing for them to do is to die before this happens so that they never have to go through the pain of being forgotten.

In the fourth stanza, the tone has changed considerably so that it is almost cheerful and pleased. At this point in the poem, the speaker is explaining why it is so much better to die and be revered than to be alive and forgotten. Specifically when he says: “And silence sounds no worse than cheers”, he is describing how it is just as good to only hear silence when a person is dead than it is to hear cheering when someone is alive. The structure of this poem provides a very sing-song like sound to the poem which adds to the meanings of this poem by making it be more upbeat and happy, even in the sadder parts of the poem. This poem is composed of seven four-line stanzas. Each stanza only contains one sentence; this creates a feeling that each stanza is a completely different thought or idea.

In stanza five, the tone changes to be more positive, and Housman is describing what happens to most athletes which is that their honor dies before they die. This can be inferred when Housman says: “And the name died before the man”.(L.20) The idea here is that dying before your name is better than dying after it. This poem mostly consists of iambic pentameter but it also includes some trochaic pentameter. These two meters work well together since they are just the inverse of one another. The meter contributes to creating the pace for this poem and also its lyrical sound and almost sing-song nature. This type of sound created by the structure, meter, and also by the consistent rhymes that are (AA,BB) throughout this poem, make the poem seem like it should be a happy one, which is hinting at the fact that this poem has a positive meaning.

The next stanza starts out with a very important image, “echoes fade”(L.21). This image is the boy dying before his glory fades. This is important to the meaning of the poem because it’s repeating the idea that people should die before their glory wears out. The tone in this stanza begins to be almost celebratory of the early death of the boy. The diction in this stanza also points towards glory with the use of the words “challenge-cup”, which is a trophy. Trophies are a symbol of achievement and glory.

The final stanza begins with a statement about early-laurelled heads. This is an allusion to Greek history; when the champion of a race or other event was crowned the laurel wreath was the crown that was always used. Laurel means honor or praise for an achievement, so when he says “And round that early-laurelled head”(L.25) this can be taken to mean that this person has received glory early in their life and was given a crown of laurel.

In summary, overall this poem seems to be melancholy, but from further analyzation, it has become apparent that this poem is actually celebrating the death of a boy because he is seen by the author as lucky. The literary devices used throughout this poem are shown to greatly improve and develop the ideas of the poet.The meanings and ideas in this poem were scattered around in a variety of different forms, no idea was spoken of literally; all of the poet’s thoughts were placed into metaphors or symbols as well as other literary and sound devices. This writing scheme of using objects to express thoughts without explicitly saying what is meant makes the poem far more intriguing and artistic. 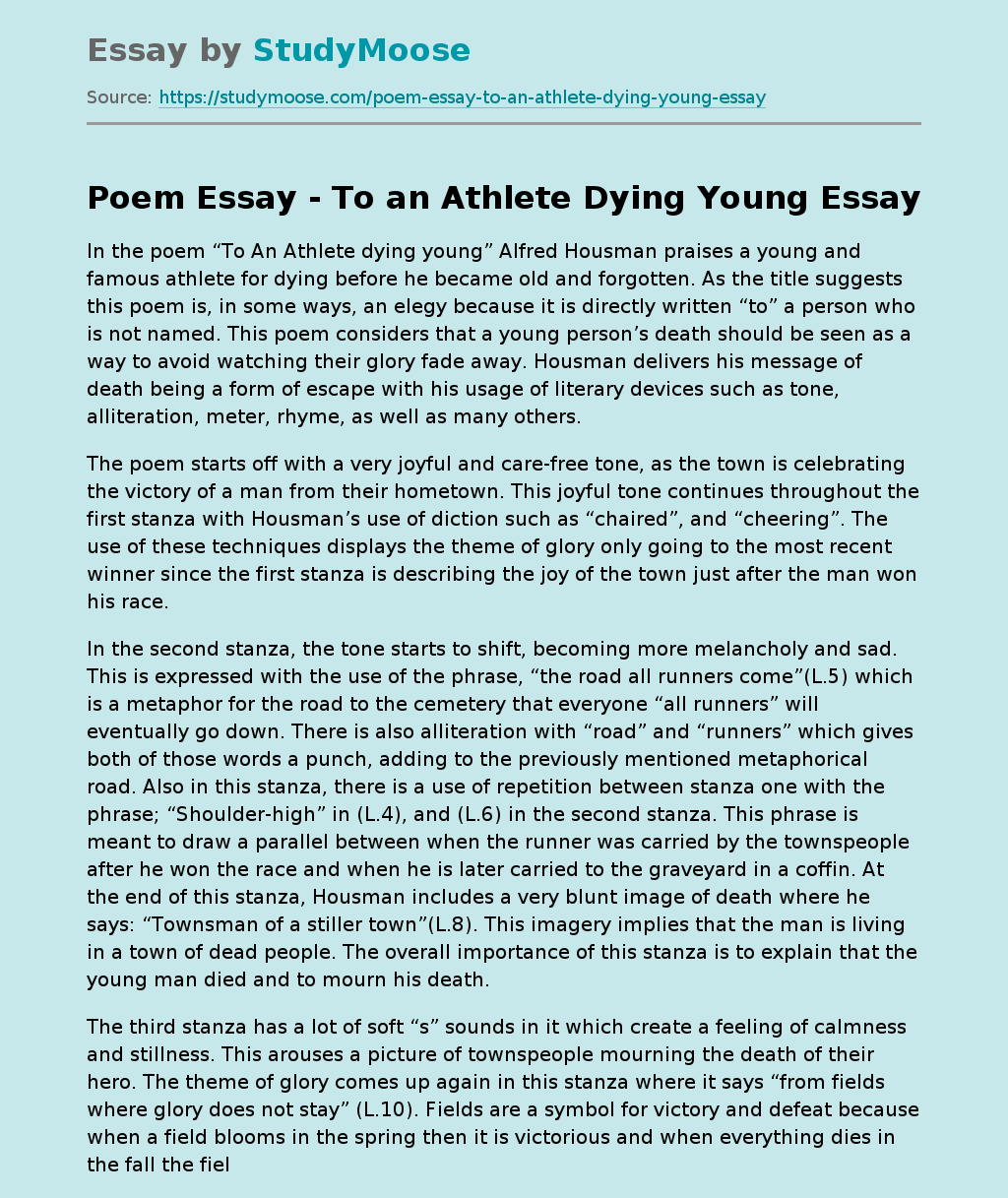