Theme of The Death in “To An Athlete Dying Young”

E. Housman’s “To An Athlete Dying Young” is part of his series of poems collected in his book, A Shropshire Lad. It is set during the funeral march of a young and victorious runner who died at the height of his career. The speaker is one of the pallbearers, who recounts the athlete’s victory and philosophizes on the timeliness of his death. As with the rest of the book, this poem resounds with the melancholic themes of death and dying in youth.

Don't use plagiarized sources. Get your custom essay on
“ Theme of The Death in “To An Athlete Dying Young” ”
Get custom paper
NEW! smart matching with writer

To be more specific, this poem describes how it is best to die young and at the peak of one’s career in order for one’s memory and legacy to be forever etched in the minds of the people. Though Housman’s exhortation might seem to be bordering on the macabre, it rings true: glory, fortune, and fame are all fleeting.

The poem starts by depicting the victory of the runner and how he became the source of pride in his town: “The time you won your town the race / We chaired you through the market-place.

” The image of chairing shows how the townspeople carried the runner on their shoulders and paraded him in the market-place. The market setting is important, as it depicts a place where people of all ages and social status converge.

It is a testament to the runner’s achievement and how it was able to bring together different people together in his victory. As they were carrying him on his shoulder, “Man and boy stood cheering by, / And home we brought [him] shoulder-high.

” The last line of the first stanza foreshadows what would happen as the poem progressed.

Carrying him shoulder-high not only indicates how he was chaired by the townspeople but also foreshadows how his coffin would be carried at the same shoulder-high level as he is brought to his tomb. Also, home could be read two ways given the foreshadowing: home as in his physical house and home as in his final resting place. In this manner, the speaker draws a connection between his victory and his death, and how, in both instances, he would be carried by the shoulders to be brought “home.”

In the second stanza, the procession takes a sudden turn from one of gaiety and victory to one of sadness and melancholy, as this time, they are no longer celebrating but sending the athlete to his grave. “Shoulders” and “house” again are mentioned, paralleling that of the first stanza albeit taken on a somber tone. The procession takes place on the “the road all runners come,” a metaphor for the road of life that everyone travels.

Another metaphor makes an appearance to further the sober theme: once the athlete has been brought “home,” he becomes a “townsman of a stiller town.” The “stiller town” here refers not only to the cemetery at which he is buried but to the idea that he is resting in peace, that he has accepted his death. Again, this idea of peaceful death corresponds well to the theme. When young people die, people always assume that it is “untimely,” hence, they cannot rest in peace. However, for the athlete, his death is timely as he is at the peak of his career, ensuring that he will remain a glorious image in the minds of the townspeople for generations to come.

The third stanza presents the main theme of the poem by saying that the runner was a “smart lad, to slip betimes away / From fields where glory does not stay.” The speaker also presents here the laurel as a symbol for glory and the rose as a symbol for the life of non-victors. He compares that lifespan of the laurel to the rose, indicating that the laurel easily withers, while the rose, slow to bloom, lives much longer.

The fourth and fifth stanza both expound on the third, as it gives evidence of how death is indeed a blessing for the young athlete, for in death, he is able to preserve his victory. In death, he “cannot see the record cut,” indicating that he will not have to deal with younger and better runners eventually overtaking him, as they will inevitably do. In dying, too, he will not become like any run-of-the-mill athlete, who did not quit while they were ahead. As such, he is a privileged position, as he will not live to be disgraced, for his body died before his name.

In the third stanza, death is represented by the metaphor “shady night,” which works on an age-old technique of associating death with night. An oxymoron is also used in the third stanza – silence sounds. It marries together two contradictory terms, which furthers the image of death, for in death, the only “sound” to be heard is “silence.” The main point of these two stanzas is that the brief life that he had is esteemed, for he did not have to suffer the loss of fame and glory.

In the fifth stanza, the athlete is about to be laid in his tomb, and the speaker is exhorting his companions to recount once more the victory. He rationalizes that in doing such an act the memory of the runner’s victory is immortalized, preserving it in the minds of the people. The symbol of the challenge-cup is also used as a testament to the glory of the athlete. Once again, the metaphor of the death as shade is used, indicating that death is not the loss of the light of life but merely the blocking of light. The importance of this metaphor to the poem is that death cannot extinguish the light of the runner’s glory. At most, it can only dim it to a more subtle shadow.

Finally, the last stanza elevates the theme of the poem – as well as the glorious athlete – towards another, spiritual level. In a way, the last stanza encapsulates the promise of dying young and at the height of fame, and that despite the seeming “untimeliness” of his demise, much more is to be gained through death. As the athlete passes on to the next life, the “strengthless dead” will “flock to gaze” at his “early-laurelled head.”

The image of the dead surrounding the young athlete (implied by the phrase early-laurelled) is a very powerful one, as it indicates how the glory of the athlete transcends the mortal plane, which makes it an even more laudable success. Furthermore, in this spiritual state, his laurel crowns will not wither. What this means is that his success has finally become immortal, and his glory will no longer fade, preserved as it is, ironically, through death.

Death as a way to preserve glory and success may seem to be too vain and too gruesome. However, it is important to go beyond this theme and instead, reach beyond the heart of the poem. For, at its heart and driving spirit is a reminder to people to remember that worldly glory and success are but transitory.

Theme of The Death in “To An Athlete Dying Young”. (2017, Mar 11). Retrieved from https://studymoose.com/theme-of-the-death-in-to-an-athlete-dying-young-essay 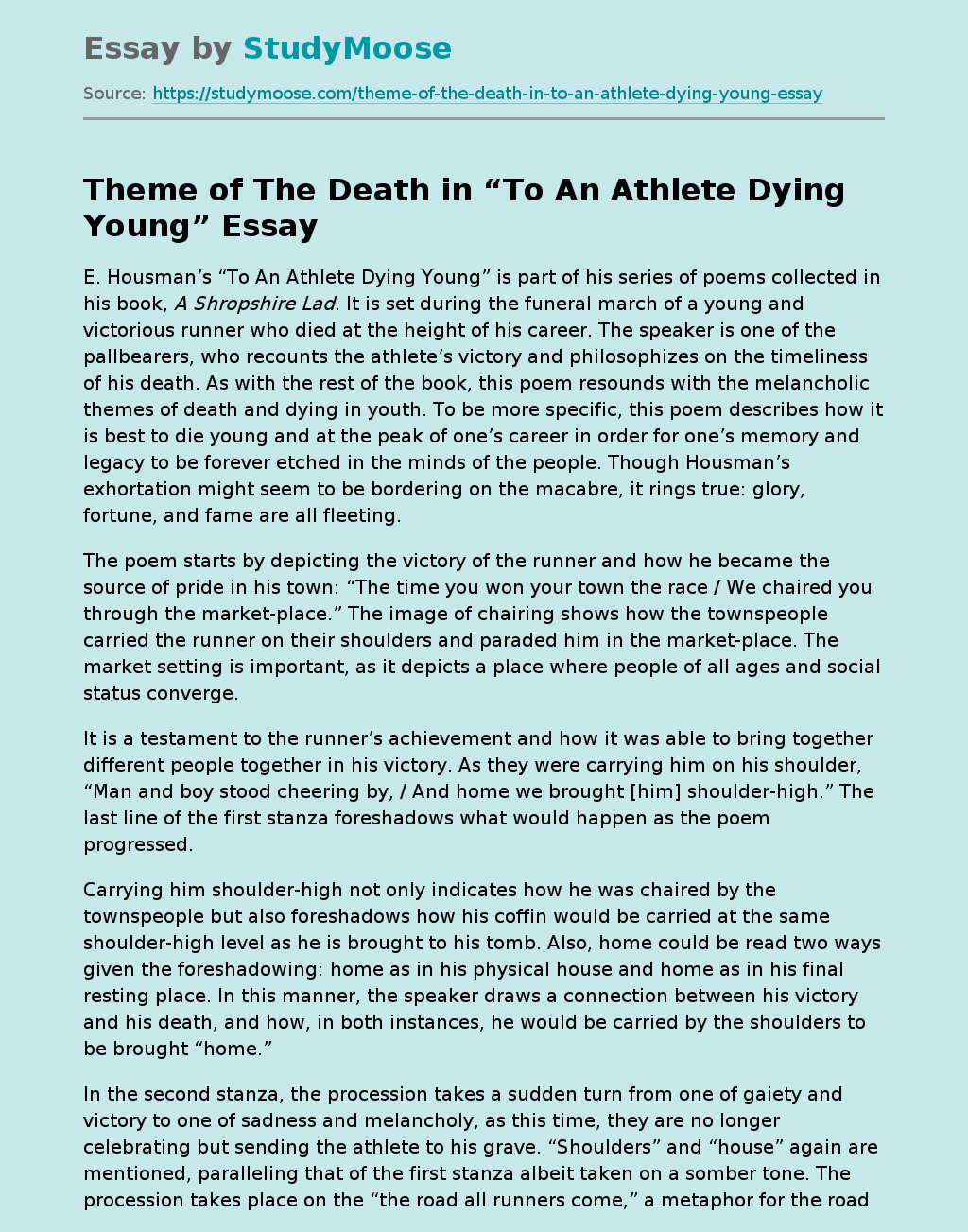