I always have respected Olympic athletes, for they spend all their time training. Victorious athletes were professionals in the sense that they lived off the glory of their achievement ever afterwards. Their hometowns might reward them with: free meals for the rest of their lives, honorary appointments, or leadership positions in the community.

The victors were memorialized in statues and also in victory songs, and commissioned from famous poets. Today, the Olympic Games are the world’s largest pageant of athletic skill and competitive spirit.

Don't use plagiarized sources. Get your custom essay on
“ The Olympic Athlete ”
Get custom paper
NEW! smart matching with writer

They are also displays of nationalism, commerce and politics. These two opposing elements of the Olympics are not a modern invention. The conflict between the Olympic movement’s high ideals and the commercialism or political acts, which accompany the Games, has been noted since ancient times.

The ancient Olympic Games, part of a major religious festival honoring Zeus, the chief Greek god, were the biggest events in their world. They were the scenes of political rivalries between people from different parts of the Greek world, and the site of controversies, boasts, public announcements and humiliations.

Ancient athletes competed as individuals, not on national teams, as in the modern Games. The emphasis on individual athletic achievement through public competition was related to the Greek ideal of excellence, called “arete”. Aristocratic men who attained this ideal, through their outstanding words or deeds, won permanent glory and fame. Those who failed to measure up to this code feared public shame and disgrace.

Olympia was one of the oldest religious centers in the ancient Greek world.

Since athletic contests were one way that the ancient Greeks honored their gods, it was logical to hold a recurring athletic competition at the site of a major temple. Also, Olympia is convenient geographically to reach by ship, which was a major concern for the Greeks. Athletes and spectators traveled from Greek colonies as far away as modern-day Spain, the Black Sea, or Egypt. Athletics were a key part of education in ancient Greece.

Many Greeks believed that developing the body was equally important as improving the mind for overall health. Also, regular exercise was important in a society where men were always needed for military service. Plato’s Laws specifically mentions how athletics greatly improved military skills. Greek youth therefore worked out in the palaestra (wrestling-school) whether they were serious Olympic contenders or not. Ancient competitors were required to train at Olympia for a month before the Games officially started, like modern competitors at the Olympic.

Young men worked with athletic trainers who used long sticks to point out incorrect body positions and other faults. Trainers paid close attention to balancing the types of physical exercise and the athlete’s diet. The Greeks also thought that harmonious movement was very important, so athletes often exercised to flute music. The sports have changed dramatically, but the pride of being an Olympic competitor has remained as strong as ever! The most important thing in the Olympic Games is not to win but to take part, just as the most important thing in life is not the triumph, but the struggle. “The essential thing is not to have conquered but to have fought well” (Pierre de Coubertin). 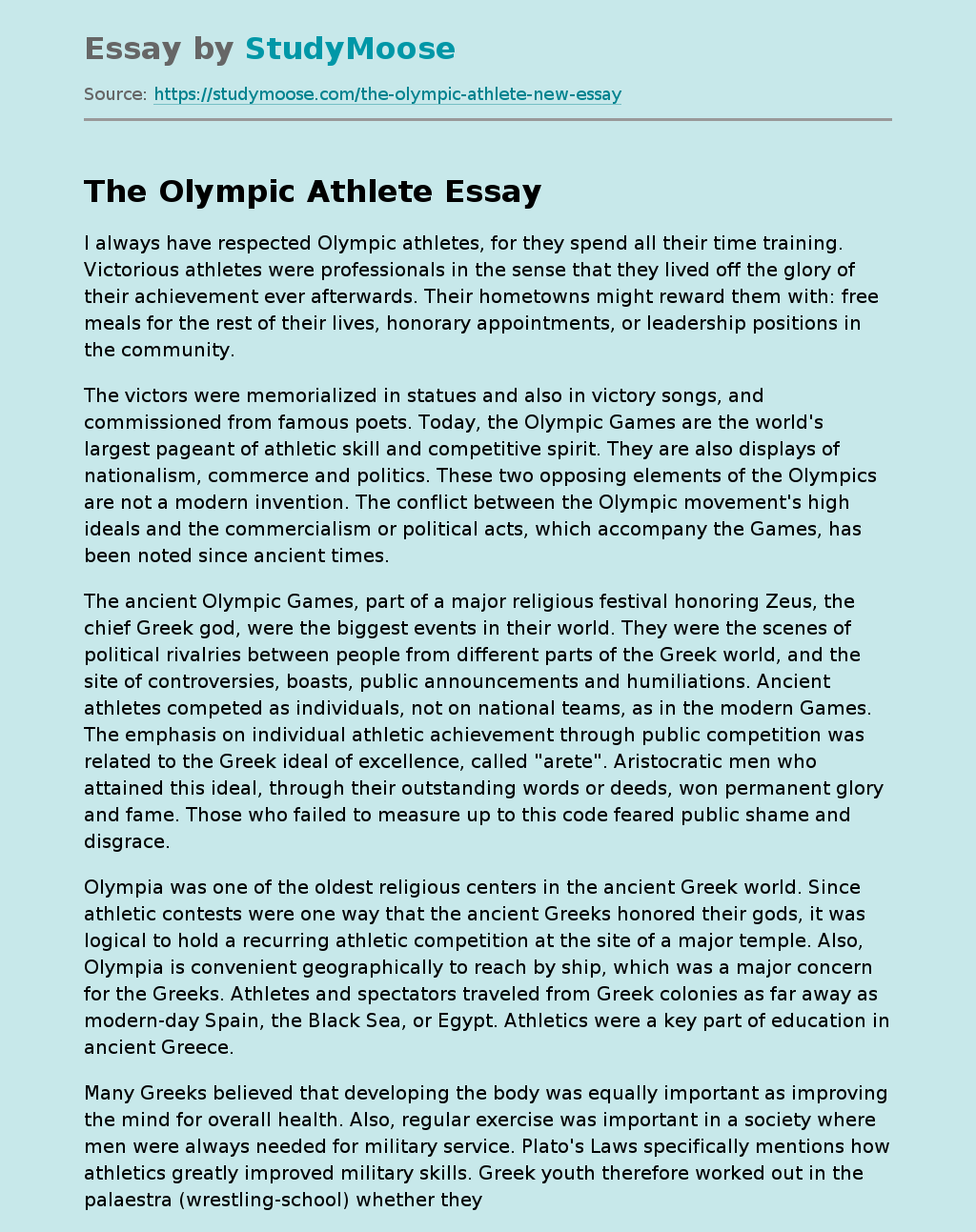