The economic effect of the Olympic games

The Olympic games are one of the world most important activity from a sporting point of view because all of the most important players in the world will be there and will raise the prestige of the country but also from an economic point of view because to host such an event you attract new investments , business opportunities and the number of tourists will raise and that will boost the economy of a country for the long. Purpose of search: The aim of this paper is to show how the Olympic games can influence the economy.

Don't use plagiarized sources. Get your custom essay on
“ The economic effect of the Olympic games ”
Get custom paper
NEW! smart matching with writer

The contribution of an Olympic game to a country economy is very significant , also it helps in developing the host city area by creating new job opportunities from the infrastructure level to the tourism .However this major sport events has it’s advantages it also has disadvantages like: building and maintaining the infrastructure, costs of hosting the event and overpopulation.

Critical analysis of the specialty literature:

Studies have showed that there is a period of three years where the GDP which is the principal factor to measure the health of a country’s economy, grows to a maximum level being represented by the year of the event then it starts to decrease. According to Huang (2011):“Most of hosted successfully Olympic Games all bring remarkable economic benefits to host country’s development of various industries. For example, p reparations for the Olympic Games brought Korea 7 billion dollars in production and 2.

Tourism is also a very important branch from which you can increase the GDP and to develop the area in which the event is hold with the construction of the Olympic village, stadiums and already existing local attractions. But to have a continuous income the sport tourism it is still a need to invest and promote the sport industry. Plus there millions of people watching the event from home and might consider in the future visiting the country. Another plus for a country which host the event comes from the sports industry .According to Mingxiao (2005) :” Sports industry is one of the important material bases to sports economic development and socialprogress, has an important stimulat ing role on sports economy and even national economic growth, and is the emergence of modern human economy in the form of a new industrial economy “.

For the short run the country who organizes the games has for the beginning very high cost of investments and little revenues but they will be covered the cost and will make a profit in the long run period . In some particular cases they might never be recover the costs. The most expensive winter Olympics games were in Sochi, Russia in 2014 an it cost 50 billion dollars from which $6.4 billion was spent on sports related costs. Initially it should have cost only 12 billion but the place was chose poorly because Sochi has a humid subtropical climate being located near the Black Sea and they went over budget with the cost of maintaining the winter conditions.

My opinion regarding the economic effect of the Olympic games is that the economic boost is very significant for the country and it can be see in the raise of the income from tourism industry and sports industry. It is also good because there are a lot of investments in infrastructure that will last for a long period of time, it creates new jobs for the people, and to host such an event has raised the prestige of a country and the GDP.

The economic effect of the Olympic games. (2016, Aug 20). Retrieved from https://studymoose.com/the-economic-effect-of-the-olympic-games-essay 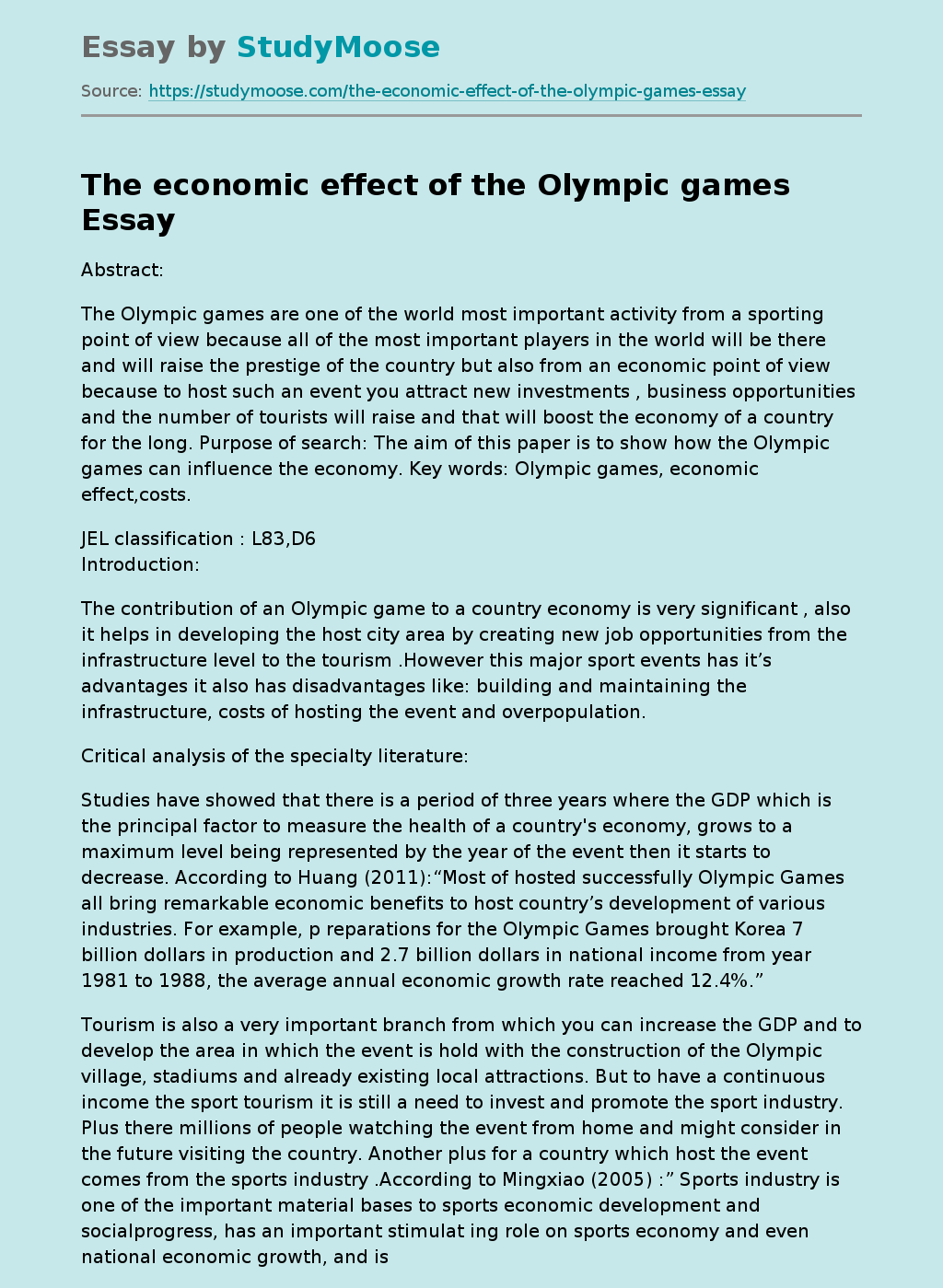