Consisted of early Filipino literature passed down orally; oral pieces have a communal authorship – it was difficult to trace the original author of the piece since oral literature did not focus on ownership or copyright, rather on the act of storytelling itself; – Many oral pieces became lost in the wave of the new literary influence brought about by the Spanish colonization; however, according to the Philippine Literature: A History & Anthology, English Edition (Lumbera, B. & Lumbera C. ), the pre-colonial period of Philippine literature is considered the longest in the country’s history;

– Literature in this period is based on tradition, reflecting daily life activities such as housework, farming, fishing, hunting, and taking care of the children as well; – Oral pieces told stories which explained heroes and their adventures; they attempted to explain certain natural phenomena, and, at the same time, served as entertainment purposes;

g. oral pieces which were performed through a tribal dance have certain similarities to the Malay dance); – This period in Philippine literature history represented the ethos of the people before the arrival of a huge cultural influence – literature as a cultural tradition, than a form of art that had a particular set of decorum. · Early Forms of Philippine Literature:

II. Spanish Colonial Period (Mid-16th – late 19th century) – The Spanish culture, as reflected in the works of this literature period, showed a clash with the pre-colonial Filipino literature in the beginning. However, due to the length of stay of the colonizers, the Spanish culture was eventually imbued in the Filipino literature of the period; – Religion became an important theme that had influenced the early Filipino writings which had the presence of paganism – “Christian Folk-Tale”;

– In addition, the influence of religion, besides on the daily life of the natives, was lead by the friar/missionary/parish priest who were appointed by the Spanish government; – Despite the goal of the Spanish government to turn the country into a full-fledged European colony, the Spanish influence ironically inspired a reformation from the natives, which eventually turned into a revolution; – Yet regardless of the conflicts that plagued the relationship between the Spaniards and the Filipinos, a sense of nationalism was formed among the oppressed, and had caused them to rise up to a nationalistic cause;

– The essay genre was recognized amidst the scene of editorial protest – Jose Rizal and Plaridel (Marcelo H. Del Pilar) were among those who opt in using the pen in voicing out the people’s cry instead of the sword; – Introduction of the roman alphabet that gradually replaced the ‘alibata’; – The Filipino literature of this period became the predecessor of many more literary works to come in the ages, wherein the theme of nationalism and freedom of speech would be evident. · Philippine Literature and Art during the Spanish Period:

Natin na Tola (1704) – eventually referred to as “Pasyon,” was written by Gaspar Aquino de Belen; an example of Christian folk epic in which the passion of Jesus Christ was written in relation with the plight of the Filipino people who were oppressed by the colonizers, as well as the values of a Filipino; o Ninay (1885) – first Filipino novel written; Pedro Paterno; o Florante at Laura – Francisco “Balagtas” Baltazar; though there are symbols and themes which dictate the protest of the Filipino against the Spanish regime, it is uncertain as to whether or not Balagtas had intended the issue – which was subtly derived from his work – since he left no notes or additional pieces that may affirm the conclusion; o Noli Me Tangere (1887) and El Filibusterismo (1891) – Jose Rizal; works which created an impact on the national consciousness and love for one’s country against the abusive government of the Spaniards; o La Solidaridad – Propagandist newspaper.

III. American Colonial Period (Late 19th – Mid-20th century) – The gradual decline of the Philippine literature written in Spanish; – The English language eventually became the medium of writing and instruction in schools; – As the Spanish colonizers left the country in accordance with the Treaty of Paris, the spirit of nationalism and the desire to be acknowledged of independence did not disappear just yet. Instead, these uniting forces geared into revolting against the new colonizers; – During the American colonization period, Philippine literature reflected the ethos of its people under a new role.

However, these day-to-day experiences under a new foreign influence, as well as sentiments, were expressed through the English language; – The Spanish ‘sarsuwela’ was eventually replaced by the ‘drama’; – One major influence of the American occupation on the Filipino literature is its refining in the context of the content and the form. Furthermore, because of this broadened knowledge on the field of literature through the education provided by the American government, Philippine literature has become more than a tradition formed by culture.

It has become an art which succeeding poets, fictionists, and playwrights continue to build upon and enrich in every generation; – Beginning with Rizal’s use of social realism as one of the major themes for his two major novels, the literature during the American colonization also became an involvement, not just reflecting the Filipino experience – a strengthened sense of nationalism deeply rooted in the Filipino pride and culture; – Unlike in the Spanish colonization period wherein female writers (e. g. Gregoria de Jesus) were overshadowed by their more dominant, male contemporaries – as a result of the education only being provided to a selected and privileged few – during the American occupation, women have had their opportunity to enhance their talent by being educated on the craft. In addition, the growing popularity of works written by Filipina writers is the result of the growing audience appreciating literature by females. 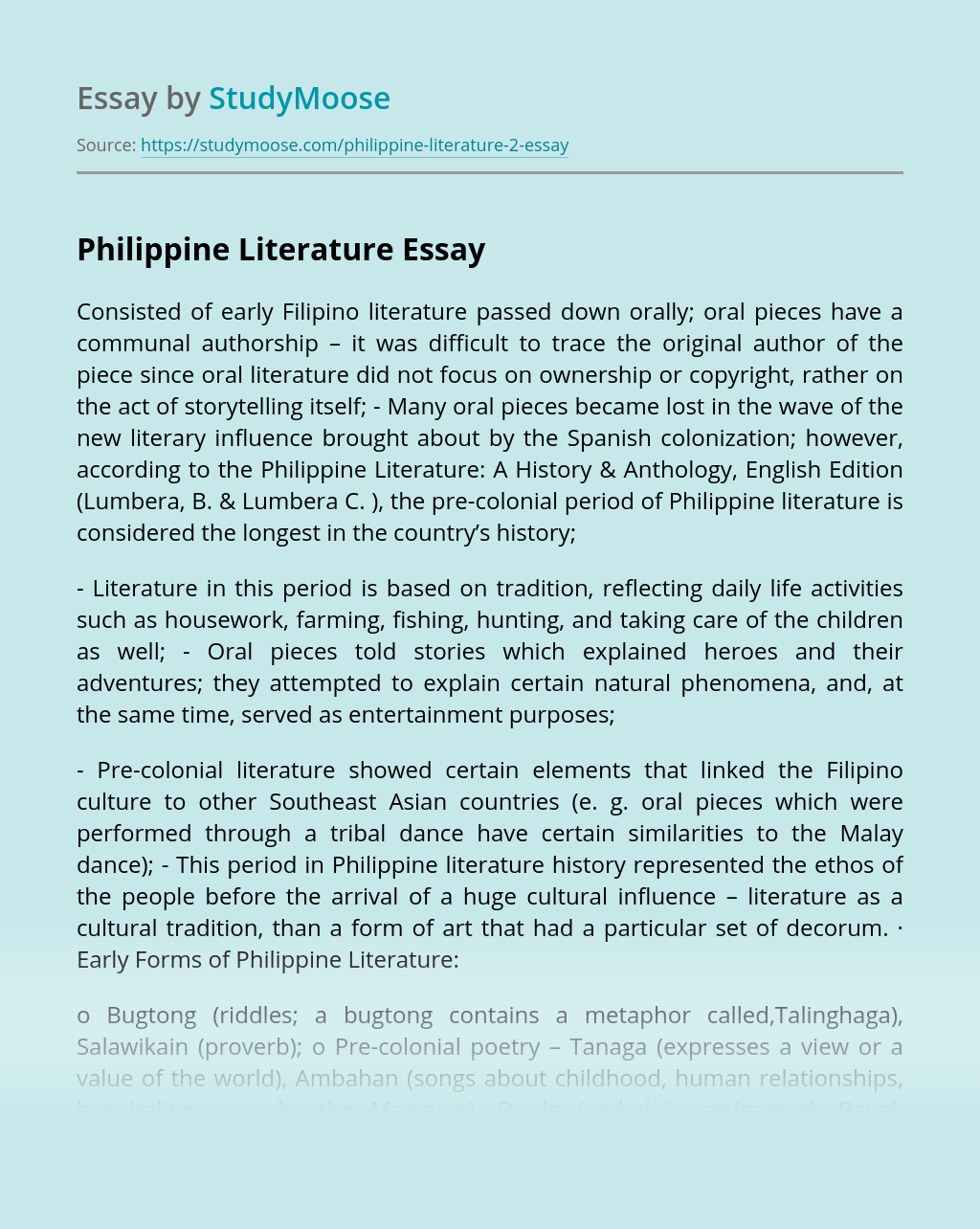 The Metamorphosis and A Very Old Man with Enormous Wings

What specifies reasonable and irrational idea and habits varies across cultures and generations. Everything depends on one’s viewpoint; nevertheless, a commonly accepted meaning of irrational behavior appears to be habits that lacks sound judgment. Things Fall Apart by Chinua Achebe, “The Transformation” by Franz Kafka, and “An Older Male with Huge Wings” by Gabriel Garcia...

In textile industry, quality is closely related to employee performance . An essential feature of any successful factory is motivated employee. Therefore the performance of an employee towards his or her place of work and the extent to which an employer, owner or manager is able to motivate employees may have a direct effect on...

In Twelve Angry Men, a young man is on trial for stabbing and killing his father. The movie focuses on twelve randomly selected citizens who are assigned the duty of determining the fate of this 19 year old man. The jury is supposed to examine certain facts and determine the truth based solely on the...

Natsume Soseki throughout this novel went into great detail about friendship and the different stages of friendship. With a little help from a man he met on the beach at Kamakura he went from a young man trying to grasp the future to a very intelligent university graduate with all his morals set straight. Soseki’s...

“Our commonsense explanations of the world and ourselves are problematised by Atwood through her novel. Nothing is quite as it seems, when we look at anything (in a mirror, in the past, at others) it is refracted as if through water.” Discuss the ideas and issues in the novel in relation to this statement, paying...