It has long been believed that an individual’s health is a private matter. However, in contemporary society, where human interaction is frequent and medical costs are high, the health of any individual concerns the whole community.

Society as a whole suffers when an individual falls ill. Nowadays, a disease can spread very quickly between people in the same community and even across national borders. If a single patient is not diagnosed and treated in time, many more people will be affected.

Don't use plagiarized sources.
Get Your Custom Essay on People Should Look After Their Health as a Duty to Society They Live in Rather Than Personal Benefits Just from $13,9/Page

In addition, the high cost of medical treatment a patient requires is usually paid by the government and society. A smoker who suffers from lung cancer, for example, is making other taxpayers pay for his habit. For these reasons, health is more than just a personal matter.

In the same way, good health benefits society as well as the individual. By keeping fit, a person is not only investing in his/her future, but also contributing to the overall productivity of society.

That is the reason why many governments encourage their people to participate in sports as a way of boosting their health. Some people might argue that their freedom will be limited if their health is regarded as a public matter. However, I would like to point out that personal enjoyment should never be placed above public interests. Drug users, for example, are punished in any civilized society.

In conclusion, health is not an issue like seatbelts which affect only the individual. In an era when everybody is involved with everybody else, people should look after their health for the sake of society as well as themselves.

People Should Look After Their Health as a Duty to Society They Live in Rather Than Personal Benefits. (2016, Sep 14). Retrieved from https://studymoose.com/people-should-look-after-their-health-as-a-duty-to-society-they-live-in-rather-than-personal-benefits-essay 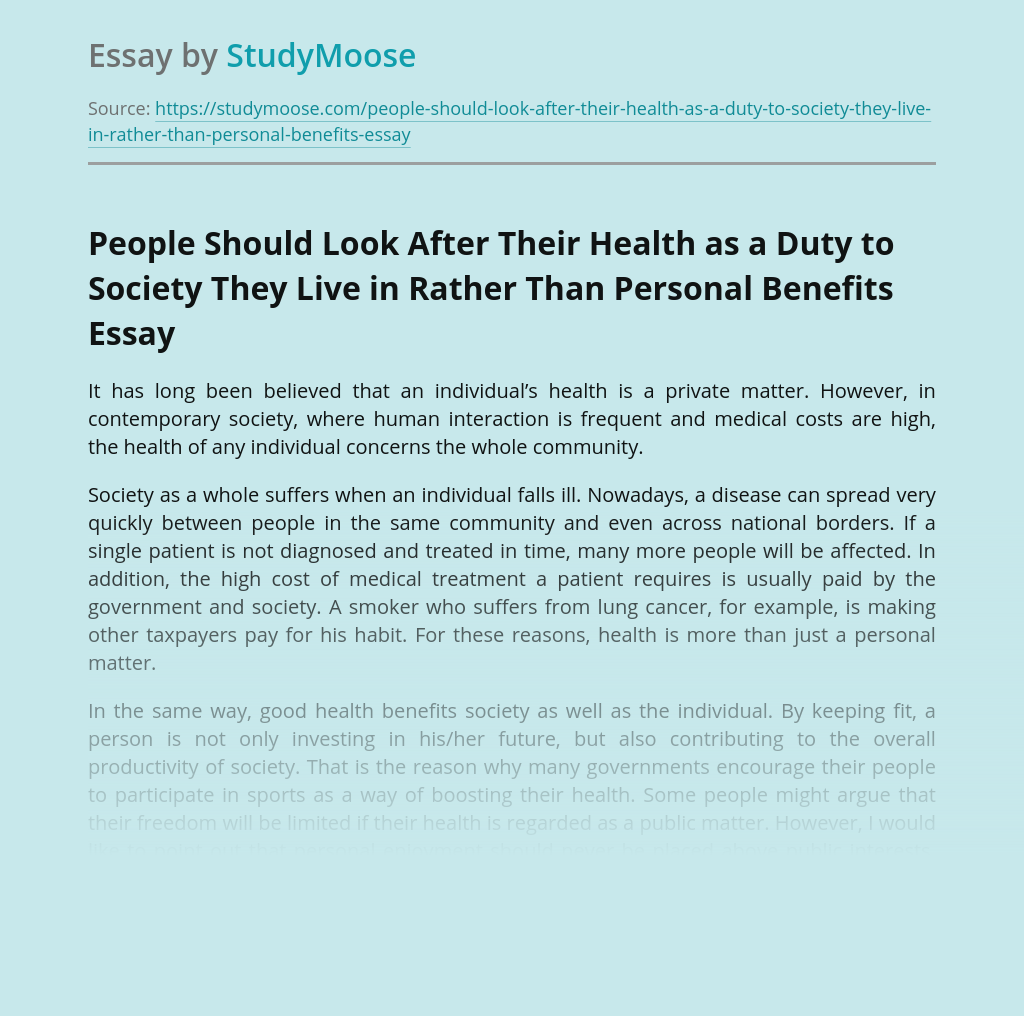 Introduction For this assignment I am going to produce an information booklet for new employees. Within this information booklet I will be explaining potential hazards and the harm that these hazards may arise in health and social care settings. My chosen service user group is the elderly infirm. The working environment in which I will...

Healthy kidneys make hormones such as renin and angiotensin. These hormones regulate how much sodium (salt) and fluid the body keeps, and how well the blood vessels can expand and contract. This, in turn, helps control blood pressure. They do this by regulating: • The amount of water in the body. If there is too...

Compare and contrast essay Introduction             There are a lot of disparities between the every day lives of modern teenagers and those of a century ago. It is impossible for teenagers to recognize the differences exclusively, except when they are told by their parents. The mindset of teenagers keep changing so that they can accommodate...