'You inherit your environment just as much as your genes'

‘You inherit your environment just as much as your genes’. It is questions like the nature-nurture debate in psychology and the ideas of certain criminologists, in terms of why people carry out evil acts, that have inspired my deep interest for the subject. I am hugely motivated to understand what distinguishes us as individuals, how our behavior evolves in such different ways, and to what extent this is due to our genetic makeup or our social setting. I wish to pursue psychology at university because I find it compelling how the complex human mind is able to be understood by empirical scientific explanations.

Don't use plagiarized sources. Get your custom essay on
“ ‘You inherit your environment just as much as your genes’ ”
Get custom paper
NEW! smart matching with writer

One area I was initially absorbed by was social psychology and particularly Stanley Milgram’s experiment which we explored in both ethics and psychology, in conjunction with the work of Zimbardo, and his book ‘The Lucifer Effect’, which was a formative influence in my decision to study psychology. I was intrigued by the fact that some of the prisoners identified with their role and others experienced extensive trauma, even though they were aware what they had signed up for was merely an ‘experiment’.

Upon reading Zimbardo’s book, I noticed some striking parallels with psychiatrist Viktor Frankl’s book ‘Man’s Search For Meaning’, and began to understand how such atrocities could have been contemplated during the Holocaust. I also enjoyed learning about Frankl’s own school of therapy, logotherapy, and observed how it contrasted to Freud’s psychodynamic approach where he emphasizes frustration in the sexual life, whereas Frankl stresses that neurosis is caused by the sufferer’s failure to find a meaning in their existence.

I found Zimbardo’s reflections on the small and easy steps towards tyranny and gravely immoral behaviour shocking, but it was also an area which I was keen to investigate further. Researching Stanley Milgram’s obedience experiment in more detail, led to me presenting his ideas to my school academic reading group. I enjoyed communicating the power of authority to my peers and how ordinary people, when in the agentic state, are capable of killing another human being. Reading more about the experiment prompted me to wonder whether I would have done the same under similar conditions and to what extent we are already operating outside the boundaries of our autonomous state in our day to day lives?

My studies in RS have further supported my interest in psychology. Studying both subjects for A level has shown me that they complement each other; with psychology having its roots in philosophy. Philosophy has enhanced my ability to deal with conflicting viewpoints and to form my own cohesive and logical opinion, which is beneficial when handling issues and debates in psychology such as the varying stances different approaches take on the free will-determinism debate. I recently read an interesting extract in ’30-second psychology’ about Kohlberg’s theory of children’s’ moral development which influenced my thinking towards moral dilemmas I have dealt with in ethics. It suggested that all children develop in a fixed sequence, resulting with our morality being centred around the fundamental principle of justice. If it is true that we are biologically determined to develop in these fixed stages, then we should act in accordance to the ethical principles that emerge from it.

Outside of my wider reading I am also absorbed by current advancements in psychological research. This year I became a student member of the British Psychology Society and am planning on attending the next social psychology conference. Further to this I am also run the psychology society at school where we meet regularly to discuss current research referenced in ‘The Psychologist’ or academic journals.

My non-academic interests are largely devoted towards sport. In lacrosse recently I trialled for the U19 England National Academy and have also represented Hampshire and the South West. In addition to this, I have enjoyed working as a coach on summer lacrosse camps; learning to motivate and engage the players. My principal sport is athletics where I compete in 400m hurdles. I was recently invited to compete in the senior British Championships as the youngest competitor in my field and I am currently placed 11th in the UK on the U20 rankings. I am also on the British Athletics performance pathway, with the aspiration to become a senior international. As part of this I am completing a diploma in sporting excellence which recognises the skills and knowledge essential in developing as a potential elite athlete. This summer I completed my gold Duke of Edinburgh expedition. My most abiding experiences were how individuals and the team worked through moments of low moral in pressurised situations and the fulfilment I got from visiting and getting to know an elderly resident at a care home.

I have been able to apply learning from my studies in all these experiences: sport, leadership and caring. It is evident that psychology is intertwined in almost everything we experience in life and this is what motivates me to continue this learning at university and applying it in a future career.

'You inherit your environment just as much as your genes'. (2019, Dec 17). Retrieved from https://studymoose.com/you-inherit-your-environment-just-as-much-as-your-genes-it-is-example-essay 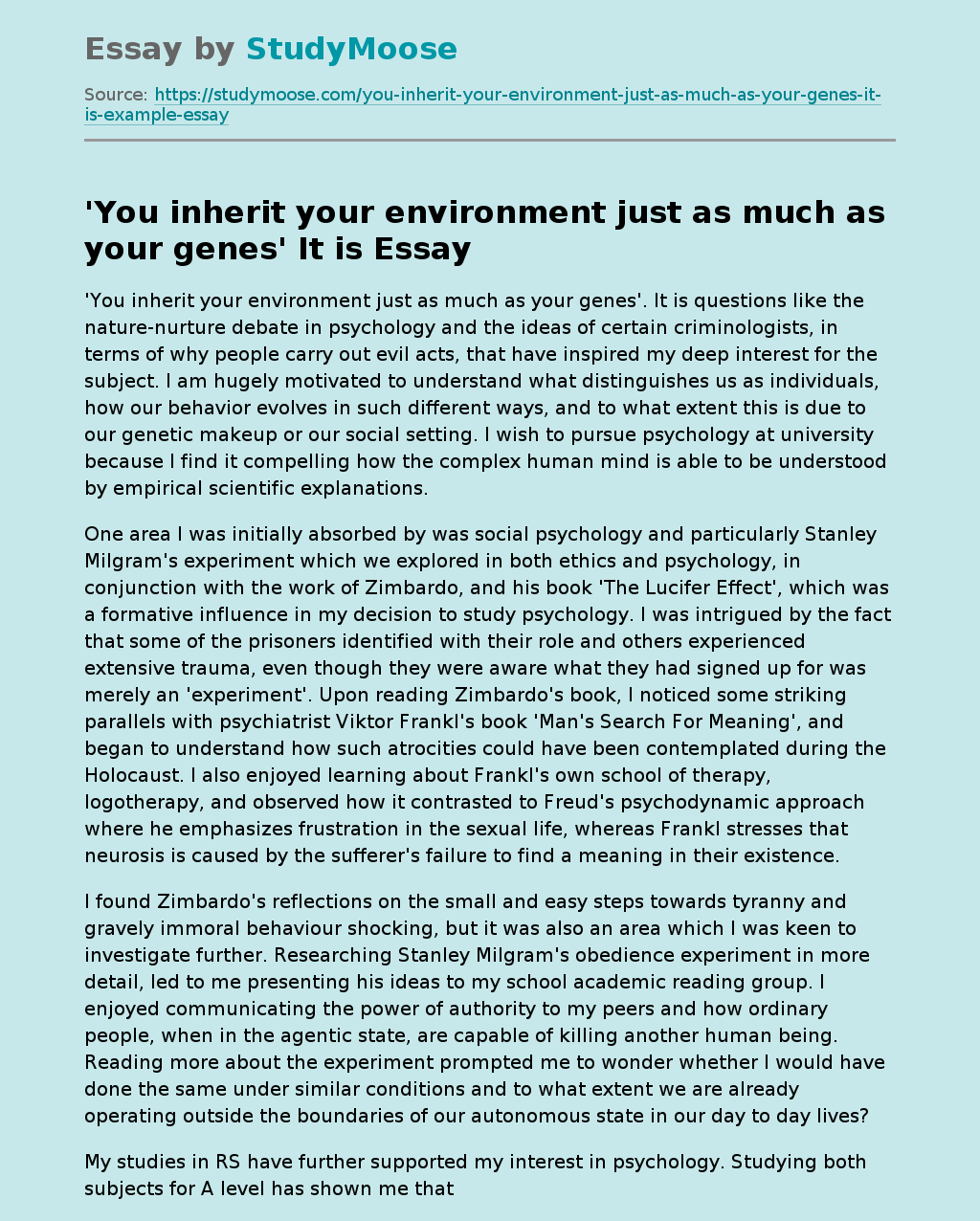