People Can Have Loyalty But Not Everyone Get Good Loyalty

Geoffrey Trease the author of Cue for Treason show us good quality loyalty in this book amongst many people. The best quality of loyalty belongs a friendship that starts at the very start of this book, it is between Peter and Kit. Another big loyalty bond is between the secret agent the Queen and all of England. And last but not least the bond between Tom boyd, Peter and Kit demonstrates that these characters will not betray each other. It takes two good human beings to have a loyal friendship.

Don't use plagiarized sources. Get your custom essay on
“ People Can Have Loyalty But Not Everyone Get Good Loyalty ”
Get custom paper
NEW! smart matching with writer

In Cue for Treason Geoffrey Trease introduces us to two characters who are enemies at the start but become close loyal friends in the end. Peter and Kit start off ruff. Kit is a better actor than Peter and Peter despises him. When one evening Peter and Kit start to fight Peter soon finds out that Kit is a girl pretending to be a boy.

Peter at that point proves that he is loyal to Kit when he says, “i shan\’t tell anyone” said Peter, “You won\’t.

Thanks Peter. Ever so much” (p. 85) says Kit showing that she is very thankful that Peter decides to be loyal to her. Their relationship starts to get better and better from here on. It improves on a large scale when Mr. Burbage starts to threaten to beat up Kit after she disappeared right before the play. Peter proves his friendship and loyalty once again when he stands up to Mr. Burbage for kit saying, “You mustn\’t,” I shouted, clutching his arm.

“You mustn\’t, really, Mr Burbage. …”(p. 112) . This event shows us that Peter and Kit will both stand up for each other no matter what the consequences will be. They soon show their support and loyalty to each other again on their way back to london.

When the men stops them in Virginia during the big fight on the horses Peter tells Kit to run away and leave him behind but the thought of that to Kit is ridiculous. No matter what he said she would not betray him. Peter said, “Again Kit ignored my advice. She argued afterward that there was no help she could hope to fetch,and in those circumstances she wasn\’t going to leave me. That the fate of England might hang om it did not occur to her. I’m flattered to know that, for the moment, she was thinking more of my fate.”( p. 253) As Peter said, Kit is thinking of Peters fate. She cares about him, she is loyal to him. Although they fought quite a bit during this book, in the end they will always be there for each other and never betray each other or their trust. This is not the only time great loyalty was demonstrated by Geoffrey Trease in Cue for Treason.

The loyalty the secret agency show to the Queen wanting to protect her in every way possible is also then showing that they are loyal to all of England as well. “Bess wouldn\’t take care of herself, she took risks, but she had faithful servants to take care of her.”. (p.155) The Queen had loyal secret agents who would protect her no matter the cost. Walsingham one the secret agent who built the secret agency improved that established the security of the Queen making England safe and in controle. Tom Boyd is very committed to his job to protect the Queen. But he is not the only one, Peter recently joined the secret agency and is already proving his loyalty to the Queen and all of England. When Tom Boyd did not return Peter knew that he has to go in and do whatever it takes. “Dad cant save the Queens life in London, I said Now Tom Boyd… hasn\’t come back, i\’ve got to take on his work.” (p.214)

All the secret agences would do whatever they had to do and that shows that they all are loyal agences to the Queen and to London. Three characters Geoffrey Trease introduced us to have a very loyal bond after only knowing each other for a couples days. Peter, Kit and Tom Boyd are very loyal to each other. When Peter and Kit were assigned their first mission to go to cumberland with Tom they need to trust that this is not a set up and Tom needs to trust that they won\’t mess up the mission. Tom Boyd needs to be loyal to them because as Peter said “If Tom Boyd went alone, he would be as helpless in the mountains as à blind man; and in the villages, talking to the folk in that somerset voice as his, he\’d be as noticeable as a Negro.” (p. 156-157) So that meant that they need to trust each other as early as possible. So the three of them stayed loyal to each other. When they arrive at the peel tower they make up a plan to all take à turn being the lookout so that the others could get à bit of sleep so that they were all well rested for their big plan tomorrow.

When it is time to go into the tower Tom has to trust Peters loyalty to him that Peter isn\’t setting Tom up for failure by sending him in while their are still men in there. Tom proves his trust as without hesitation he enters the peel tower on his mission. When Tom Boyd had not come out of the tower for a while Peter knows immediately that he has to go looking for him no matter how dangerous he knows it is. This shows that Peter is loyal to Tom and wants to go in there to try to save him if any danger has occurred. “ I\’ll go, said Peter’. I was in command for the moment. I\’d have given a lot for Kits company, but i knew i wasn\’t justified in taking her.” Peter and Kit both showed that they are loyal to Tom Boyd by leaving no man behind. In the novel, Cue for treason, Geoffrey Trease has demonstrated loyalty in many ways. Peter and Kit are loyal from the beginning of the book. The secret agents are willing to do life threatening missions for the Queen and their country. And last but not least, Peter, Kit and Tom Boyd are willing to die for each other. In this book no matter what the situation is someone was always loyal to someone in some type of way.

People Can Have Loyalty But Not Everyone Get Good Loyalty. (2020, Sep 07). Retrieved from https://studymoose.com/people-can-have-loyalty-but-not-everyone-get-good-loyalty-essay 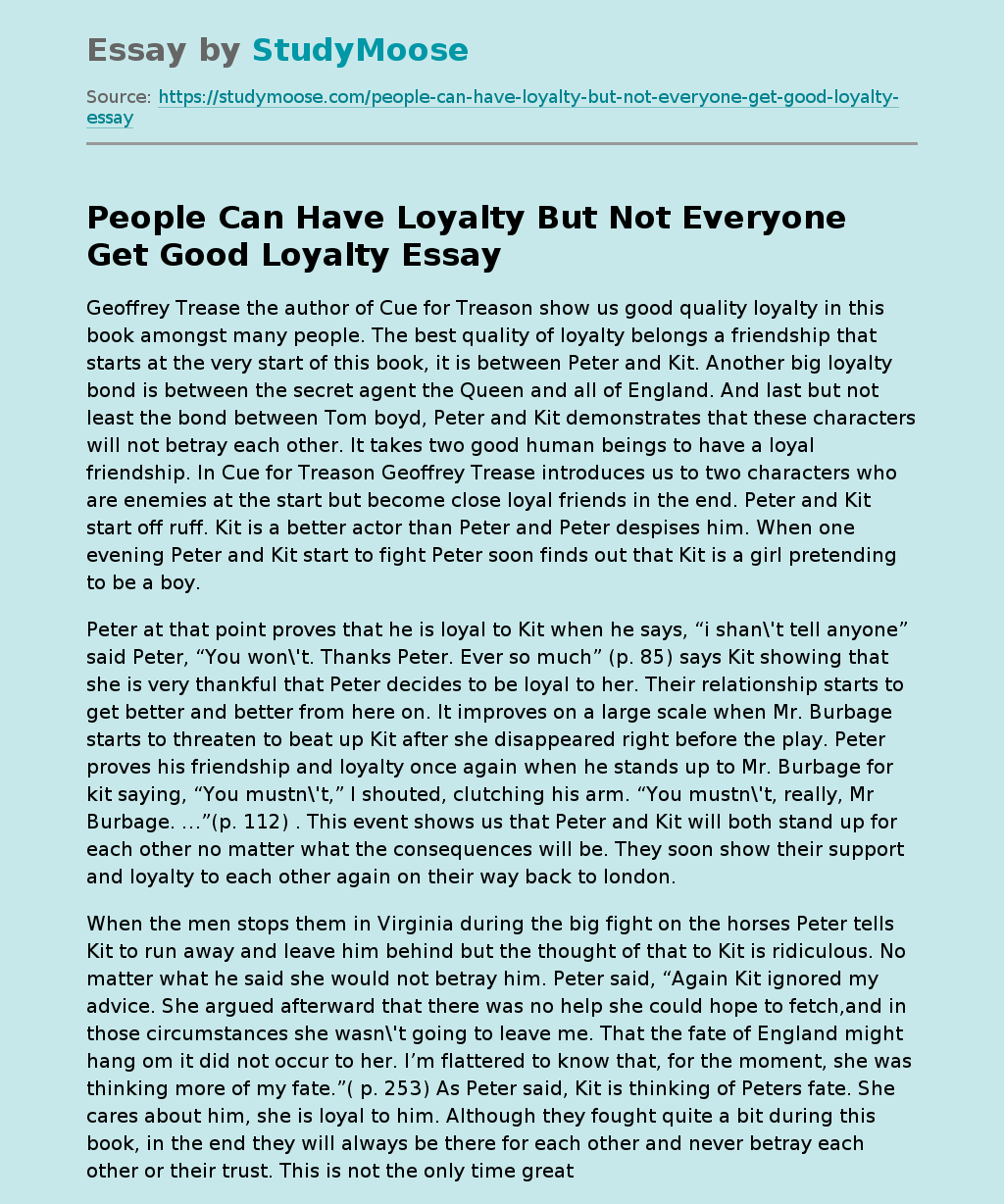