With particular attention to Act III, Scene III, discuss whether Othello is a victim of circumstances or snared by his own weaknesses

Shakespeare’s ‘Othello’, believed to have been written in 1604, is one of his most popular plays, with a long and successful stage history and was one of the first plays to be performed after the theatres were reopened in 1660. As with all of Shakespeare’s other plays, he had various sources of inspiration and transformed them for his own dramatic purposes, ‘Othello’ being no exception.

Whilst his concept of a heroic Moor as the protagonist of a tragedy was an unusual one, Shakespeare set about to explore and challenge the medieval stereotypes of the black man, where they were associated with the devil, lust, sin and death.

Don't use plagiarized sources. Get your custom essay on
“ With particular attention to Act III, Scene III, discuss whether Othello is a victim of circumstances or snared by his own weaknesses ”
Get custom paper
NEW! smart matching with writer

The plot of ‘Othello’, inspired by, and closely aligned to, a series of short stories by the Italian writer Giambattista Cinzio Giraldi, ‘the Hecatommithi’, differs from Shakespeare’s other great tragedies as the action is more concentrated in time, after the first act has a single location and has no secondary plot which, arguably, can lead to a unique emotional intensity in the play.

Though ‘Othello’ is certainly partly to blame, how much is a subject of critical debate, the contribution of Iago to the tragedy is certainly greater than that of any other of Shakespeare’s tragic villains. In contrast to the previous two scenes of this act, Act III Scene III is lengthy and fuelled with tension as the audience watches Othello’s mind become poisoned. Shakespeare focuses tightly on all of the characters, making the scene not only psychologically convincing but also a timeframe is created, where time appears to move much more swiftly that it actually does.

For the audience, the progress of Act III Scene III is painful to behold as they realise from the outset that Desdemona will seal her own fate; from the very opening of the scene where she and Emilia offer Cassio their assurances that Othello will soon favour him once again. When Desdemona claims that she would rather die than abandon her commitment to plead for Cassio, a sense of foreboding is created and the audience can only help but recognise the huge irony of this remark.

What is noticeable is that as Desdemona’s forthright approach goes against her, as does Cassio’s innocent uneasiness, and it is these characteristics that Iago so cleverly manipulates in his short, simple opening line, “Ha, I like not that. ” Unfortunately, their honesty is no match for his deceitfulness. In the first part of this lengthy scene, we see Desdemona, with the help of Emilia, try to persuade Othello to adopt her own particular view of Cassio. Desdemona is open and confident and speaks energetically, with a particular urgency in her language.

It has been argued that her insistence to know when Cassio will be reinstated could be interpreted as nagging, and Desdemona can be accused of being foolish in pressing Othello on the matter, continuing her defence of Cassio, when it is clear that Othello does not wish to discuss it. Desdemona might also be accused of getting involved in affairs that are of no concern to her, especially since earlier in the play Othello remarked that his work and domestic life were not to be confused.

With these accusations in mind, one could argue in defence of Desdemona for speaking her mind; she is confident in her husbands devotion and believes that she is acting in her husband’s best interests as Cassio has been a reliable, loyal lieutenant and friend to Othello. In contrast, Iago’s methods of persuasion are of a greater subtlety. When he pretends to be reluctant to speak, which the audience saw work so effectively in Act II Scene III, Iago gains ground swiftly as, unlike Desdemona, he needs prompting to disclose his thoughts.

Furthermore, the words that Iago chooses are devastatingly effective, implying that there is something between Cassio and Desdemona for Cassio to “sneak away so guilty-like / Seeing you (Othello) coming. ” Iago is both wise and lucky in this scene, as although Desdemona has somewhat ‘dug her own grave’ by nagging her husband and Cassio’s exit from the beginning of the scene being easily misconstrued, when Iago first speaks again after Desdemona’s exit, he hints at his own bad thoughts by asking Othello a leading question.

Iago manipulates Desdemona’s irritation of Othello through her repeated pleas about Cassio by repeating the words “think” and “honest”, causing the same effect on Othello. The audience will be aware of the fact that these two words are important to Iago’s power and influence as he poisons Othello’s thoughts by posing as an honest man. The agonising irony of this scene is prolonged as whilst Othello was not keen to hear his wife’s honest thoughts and asked her to leave him alone, he is later impatient for Iago to reveal his dishonest and evil thoughts.

What is effective in Iago’s execution of convincing Othello of his wife’s infidelity is not only his reluctance to reveal his thoughts but his claim that he hopes his thoughts are unjustified, “it is my nature’s plague / To spy into abuses, and oft my jealousy / Shapes faults that are not -“. What is interesting in this exchange between Othello and Iago is that it is the Moor who introduces the subject of his wife when the issue of jealousy is discussed,. Whilst Iago may indeed be suggesting matters for consideration, it is Othello who quickly catches up with him and jumps to his own false conclusions.

Having set the scene with generalisations, Shakespeare allows Iago to then chip away at Othello with specifics; Iago cruelly reminds Othello that Desdemona “did deceive her father” when she married him, that he is an outsider and does not appreciate the worldliness of Venetian women, “they do let God see the pranks / They dare not show their husbands; their best conscience / Is not to leave’t undone, but keep’t unknown” and finally, that he a surprising choice of marriage for Desdemona when she could have chosen someone “Of her own clime, complexion and degree,” implying that they are mismatched.

Every so often, Iago reminds Othello that he loves and honours his “free and noble nature” and only speaks because he feels it is in his best interests; his continuation of the pretence that he is Cassio’s trusted friend makes his reluctance to speak seem more plausible and it is in this scene that the power of silence is suggested by Shakespeare, and foreshadows Iago’s defiance at the end of the play. What is perhaps most horrifying about Iago’s strategic nature is that once he knows his poison has taken hold, he is confident enough to make precise ideas as to the course of action that Othello should follow.

After the exchanges between Othello, Desdemona and Emilia, Iago is then able to provide Othello with the ocular proof he so desires owing to his wife’s unwitting assistance, adding further proof to Iago’s quick-witted opportunistic nature. In the final part of the scene, Iago adopts similar methods used before, talking in generalities about honesty and the difficulty in obtaining proof, he then tells Othello the false story of Cassio’s lustful dream about Desdemona where Cassio is said to have “kiss me (Iago) hard… lay his leg o’er my thigh, / And sigh, and kiss and then cry ‘Cursed fate / That gave thee to the Moor! ”

The way in which Othello has been worked on is particularly interesting as he believes Iago even when Iago says “Nay, but this was a dream. ” Iago’s villainous and treacherous characteristics are highlighted by the fact that when Othello’s thoughts turn to revenge, he realises it is time to revert to the loyal, loving assistant and friend. The horrible irony of Othello seeking to kill Cassio by the end of the scene is shown through the fact that Othello is actually carrying out Iago’s revenge for him, and Iago has gained what he set out to achieve; to become lieutenant.

Where Othello himself is concerned in this scene, he is acted upon and put under pressure from the moment he enters. Although he is able to command his wife, he seems uneasy during his conversation with her at the start of the scene, and the resignation in his line “I will deny thee nothing” alerts the audience to the fact that Othello may already be on the brink of catastrophe, even before Iago’s poison sets in. As Desdemona exits, Othello utters the words “… perdition catch my soul / But I do love thee! nd when I love thee not / Chaos is come again,” suggesting that Othello will be devastated if his love is destroyed.

The two negative pronouns ‘perdition’ and ‘chaos’ hint at the trouble to come, undoubtedly create a sense of foreboding for the audience owing to the dramatic irony. It has been questioned as to why Othello gives into doubt and jealousy so quickly if he feels so strongly attached to his wife, however, critics have claimed that in spite of his positive qualities and calm authority as a soldier, Othello is susceptible to jealousy, impressionable and insecure.

Critics of ‘Othello’ have referred to the writings of Aristotle, who believed that the tragic hero should not be either entirely good or evil, but should possess a fatal flaw which will incite pity and fear in the audience. Whilst some critics see Othello as faultless, others feel he is too easily moved by jealousy, however, it is in Act III Scene III that Othello’s decisiveness which has stood him in good stead as a soldier in the past goes against him, as he makes up his mind too quickly.

With particular attention to Act III, Scene III, discuss whether Othello is a victim of circumstances or snared by his own weaknesses. (2020, Jun 02). Retrieved from https://studymoose.com/particular-attention-act-iii-scene-iii-discuss-whether-othello-victim-circumstances-snared-weaknesses-new-essay 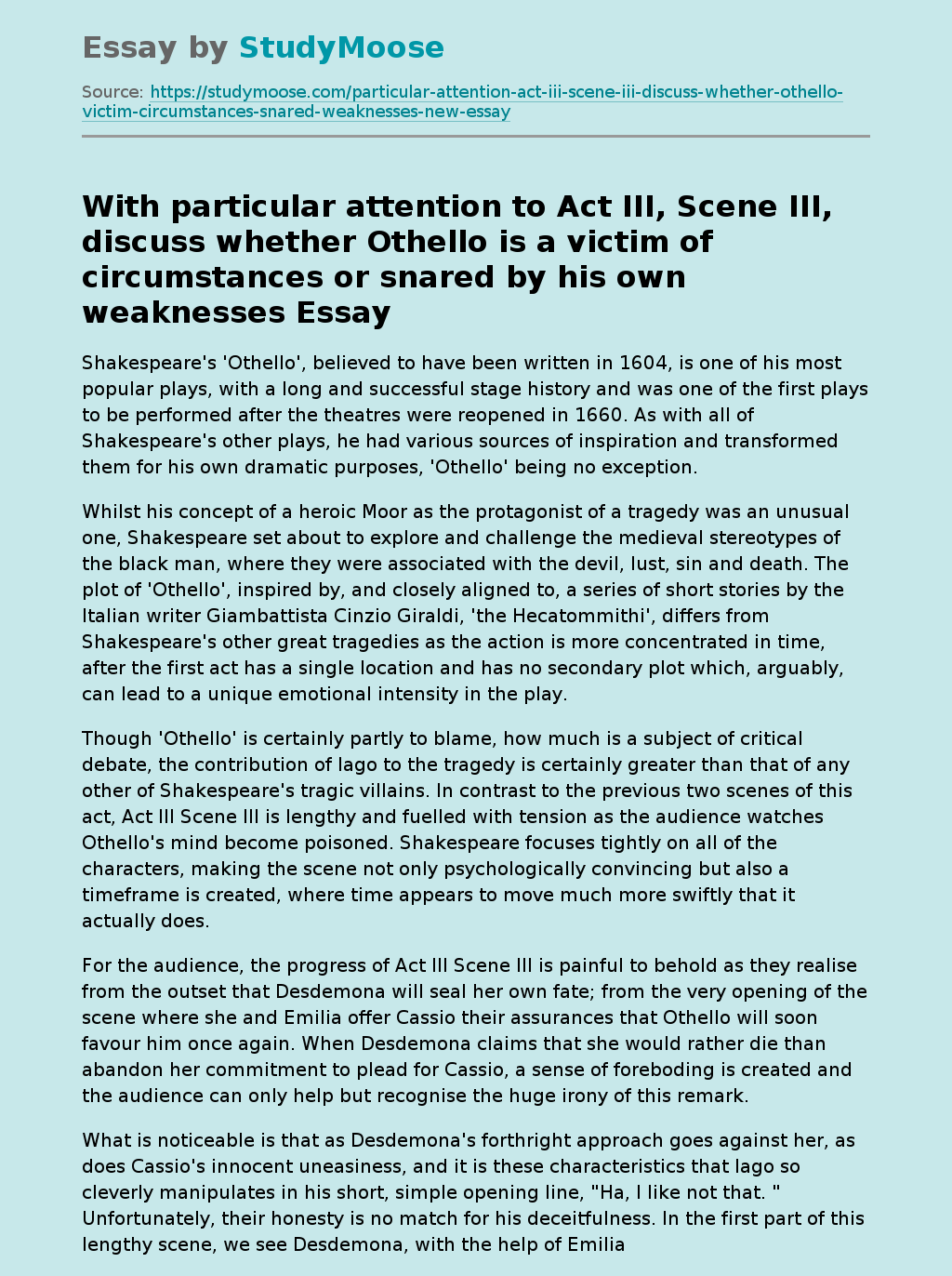