Children these days are turning out to be violent and are inevitably growing up to be lawbreakers. The fault on kids’ wrongdoings these days is usually going onto the guardians, for the most part under the statement “failing to exercise reasonable care, supervision, protection, and control over children”. However, many of the crimes that youngsters are committing are almost unrelated to their parents, and the way their parents raised them. There are many other vital factors that greatly justify their crime such as outside influences, age & lack of law enforcement on the minor crimes committed by kids.

Don't use plagiarized sources. Get your custom essay on
“ Parental Responsibility for a Child’s Criminal Actions ”
Get custom paper
NEW! smart matching with writer

Therefore, I am strongly against the idea of parents should be held responsible for their children’s misbehavior.

Nowadays children’s actions are becoming more and more reckless or we could sometimes describe it as devastating. The key factor that makes these crimes occur is outside influences that act on the kids. One of them is bad peer influence. Youngsters nowadays tend to spend most of their time with their friends.

The problem is, they don’t know whether their peers are promoting good or bad influence on them. In order to feel accepted in a social circle, they were more than willing to start smoking, stealing which will lead to a greater crime such as damaging public property and even doing drugs (Padma, 2014). Bad peer influence will instill additional stress or rather known as peer pressure in kids in which will make them become violent in the long run.

There have been cases in which the way a child is brought up or raised has no bearing on how he or she will turn out.

There are cases where a child becomes violent or prone to criminal activities because of mass media influences such as the internet & television. A parent can only control so much of their children’s social media life that they cannot control every little aspect. The emerging of unregulated content streaming services such as Netflix, Amazon Prime Video & Hulu is very alarming as kids are easily influenced by the violent imagery and curse words depicted in the movies and tv series. There is also a link between violent video games such as Grand Theft Auto and real-world aggression. For example, there is a wake of mass shootings in schools, most notably in the United States. Most of the suspects admitted that they spent a large amount of time playing shooting video games. Therefore, this kind of bad media influence played a huge role in promoting violence in children.

The age might be just a number according to many, but if we think again, they do have an impact on how we judge the people and also the situations around us. Do we really care if a 3-year-old child throws a tantrum and start breaking things? Of course not, but why? It is because we know that they cannot think thoroughly about their actions just yet. This is the idea that I would like to imply to justify my argument. Most of the violent cases that were caused by children are rarely younger than 10 years old. Older children are much more aware of their surroundings and can choose for themselves. They could think for themselves and know right from wrong regardless of how their parents raised them. Another issue regarding the age factor is the lack of law enforcement on children’s crime, especially when it is a minor one. Authorities tend to forgive and forget a crime if it is done by teenagers in the name of humanity. These youngsters will feel that they are immune from punishment and will keep repeating their sins over and over again.

In a nutshell, parents should not be held responsible for their children’s actions and wrongdoings for numerous reasons. Outside influences affect the child enormously, no matter how well his or her parents treat him. These influences could come from numerous sources such as television, the internet, and even other people that surround them. Another factor would be age, as previously stated age changes a lot when it comes down to judgment. The absence of law enforcement on a child’s crime also leads them to keep repeating their mistakes. Last but not least, it is up to the child to control himself or herself, not his or her parents. 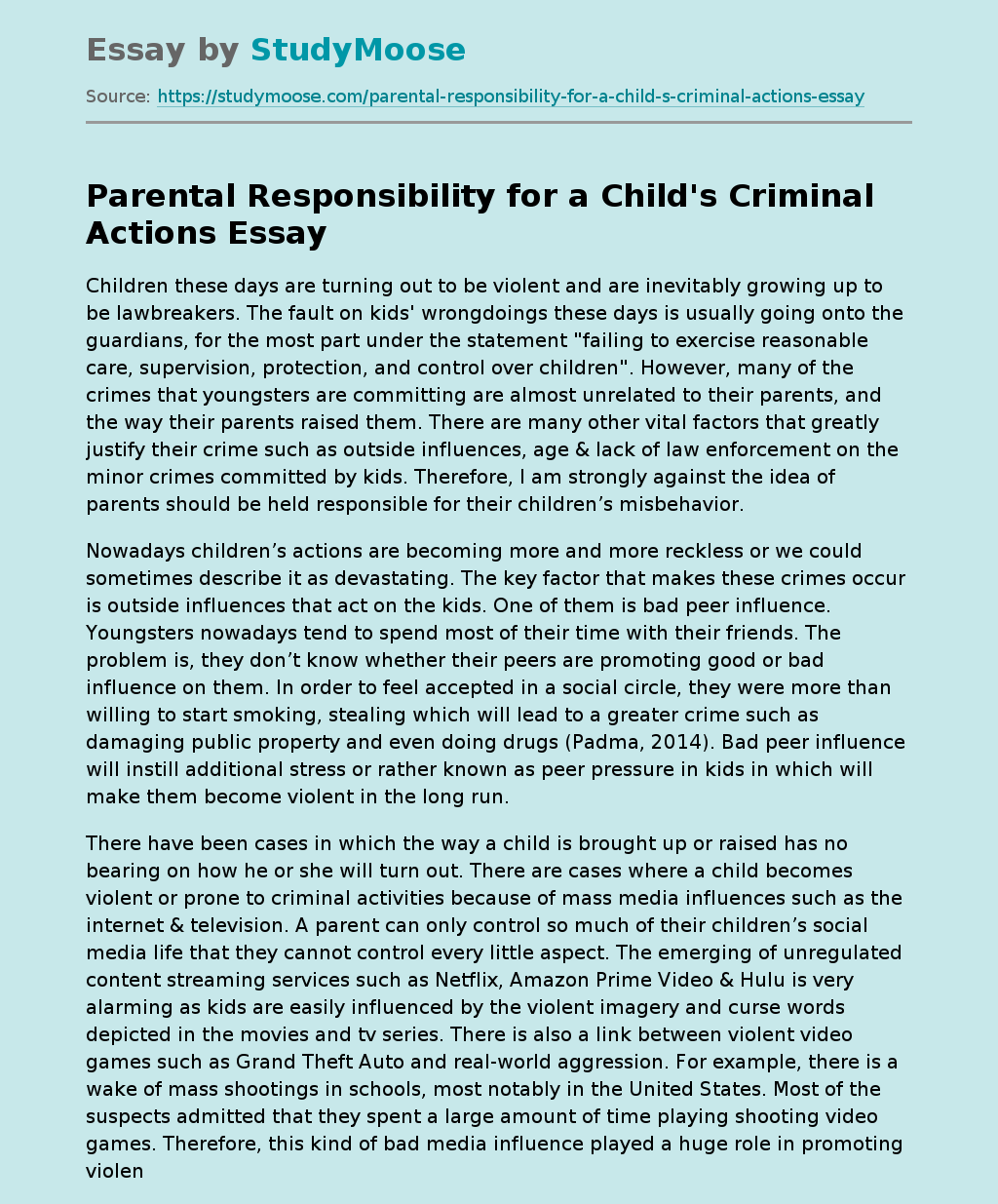