In the animal kingdom, there is a prominent association between aggression and being male. This association demonstrates that there is a strong biological foundation between violence and sex in humans. A correlation between aggression and mating can be seen in animals and humans. While hormonal forces that affect aggressive behavior are a major contributor, males, in both humans and animals, are also under selective pressure to maintain a social order and establish a hierarchy in which they are at the top.

Don't use plagiarized sources. Get your custom essay on
“ Aggressive Behavior ”
Get custom paper
NEW! smart matching with writer

These pressures raise the likelihood of aggressive behavior in finding a mate, gaining an elevated social status, finding food, and defending their territory. Most animals are a highly social species and aggression is how social order is established. Similarly, for humans, “capital punishment, imprisonment and forced removal of resources (fines and revoking privileges) are all codified forms of aggression to maintain social order” (Fields 67). The past involves the struggle for survival engraved violent aggression for survival into the brain. However, the capability of aggression often glitches because of disease, drugs or psychiatric impairments and can lead to tragic consequences.

Aggression and mating behaviors are related by common features as both behaviors evoke anticipation and intense reward feelings when achieved.

The choice to use violent force is fraught with risk, and a series of complex neural circuits that stretch extensively across the length of the brain become involved before a human strikes out. A large part of the human brain, just like the brain of other animals, is dedicated to threat detection.

Circuits within the brain are continually evaluating someone’s internal and external state for threats to their well-being. The septal area drives intense emotional responses, such as explosive rage, and is also active during sex and likewise rewarding activities. It is deep in the brain below the cerebral cortex, where consciousness arises, in a region deemed the hypothalamic attack region. The hypothalamic attack region controls defensive and aggressive behavior. According to National Geographic, “if scientists stimulate these neurons with an electrode, an animal will instantly become aggressive and attack a test animal in the cage.” The cerebral cortex district incorporates data to settle on complex choices, center consideration and manage motivations. At the point when this association is frail, individuals and creatures have a harder time handling data to settle on an educated choice without being rash about it. These rash choices are regularly described by the action word, “snapping.” However, it is not called snapping unless the result of this aggressive response is inappropriate. When it works as intended it is usually called quick thinking or, in many cases, heroic. These circuits allow humans and animals to protect themselves, their family unit, and/or society.

Risk factors are traits associated with an increased likelihood that an individual or community will be affected by or become a perpetrator of violence. As an individual is exposed to more risk factors, the probability that they will engage in violent behavior increases. Fields states that the major risk factors that predict violent behavior are “youth, male sex, substance abuse and lower socioeconomic status” (Fields 71) Poverty, high unemployment, and lack of available resources can create a sense of hopelessness among both youth and adults. There are less support services available for young people in and outside of schools in low-income areas. Males are more likely to be assaulted with abuse, wounded with a gun, or involved in a physical struggle on school property than females. Low family income contributes to an increased likelihood of becoming involved in crime and violence. Stressful family environments, such as role modeling of inappropriate behavior, conflict in the home, inadequate parenting skills, and poor communication can contribute to students’ feelings of worthlessness, which can manifest as violence. Mental illness and mental disorders affect students’ ability to learn, communicate, and make good decisions. Individuals with mental health problems are at an increased risk of being perpetrators or victims of violence. “One third of self-reported violent acts committed by people without diagnosed mental illness and seven out of 10 violent crimes among the mentally ill are associated with substance abuse, according to a 2003 review by Heather Stuart of Queen’s University in Ontario” (Fields 71). Understanding that alcohol and cocaine activates the neural circuitry of the brain for anger leaves no question that there is a connection between consumption of drugs and increased violence. Ultimately, interventions to reduce violent behavior may be possible by regulating neural circuits of aggression with drugs, precision surgery, brain stimulation or other methods.

According to the textbook, “the inability to control chronic feelings of anger can be as emotionally devastating and unhealthy as chronic problems with depression or anxiety” . Although expressing anger has been the norm for getting it “out of your system, ” the majority of the time it only makes the problem worse. By expressing anger, it often allows the person to ruminate about the situation incessantly and in the long run, makes the person more aggressive than if they “had just let their feelings of anger subside” . The textbook suggests that the best way to control anger is learning how to express it constructively and in return people usually feel better and not more angry. One way is by stepping back and taking a couple minutes to cool off so that they do not act on their original emotions of anger which can make situations worse. Often times, this is seen in social media because people do not take time to cool off or think before sending out a hateful comment which they most likely will later regret. The textbook suggests 4 constructive ways for learning to manage anger. The first is: “Don’t sound off in the heat of anger; let bodily arousal cool down” . Basically, the first suggestion is to relax and calm oneself. The second is to not take it personally because often times the actions and words of someone else are misinterpreted . Thirdly, “if you decide that expressing anger is appropriate, be sure you use the right verbal and nonverbal language to make yourself understood” . This is to ensure that the recipient of someone’s anger understands what that person is feeling and what they are trying to convey. Lastly, the book suggests to “think carefully about how to express anger so that you will get the results you want” because it is essential to learning how to express anger so the other person will listen .

Cognitive behavioral therapy is often successful in decreasing excessive frustration, violence, and aggression, by teaching people how to express anger more effectively and constructively. This method of therapy is aimed at improving anger resistance, impulse control, loving capacity, and processes of self-correction. The cognitive coping skills involved in the treatment of chronic anger consist of the following: 1) education about personal anger patterns, 2) self-monitoring of anger arousal and its cognitive companions, 3) the ability to alternatively construe provocation, 4) covert self-instruction to guide one’s appraisal of events and to cue non antagonistic responses, and 5) the ability to remain task oriented rather than ego oriented when provoked. The goal of these interventions is to impart a sense of personal independence in provocation management. One of the therapy program’s most important components was to understand how to remain task-oriented and problem-focused in an agitated scenario. Becoming task oriented has several adaptive effects in the face of provocation: 1) the person begins to define the situation in terms of a problem that calls for a solution instead of a threat that calls for attack, 2) by addressing the issues of a dispute, the person prevents reacting in ways that raise the sequence of anger and 3) by focusing on the issue or task, the person directs his attention away from internal stimuli (cognitive and physiological) that are associated with anger.

There have definitely been times when I have felt like I have “snapped” of been “snapped at” by someone. Probably the best incidents to describe is when I was younger in middle school and my family would go on vacations. I often forgot to pack something and “snapped” at my mom saying it was her fault for not telling me I needed to bring something when in reality I was old enough to know that I should have brought that item and that it was not her fault. I definitely think the situation was avoidable because I should have thought about what I was going to say before I said it and I most likely would have realized I should not say anything since it was my fault. It is evident that I did not think before I spoke which was an example of me “snapping.” There have definitely been other times I have “snapped” or been “snapped at” but this incident happened on more than one occasion. 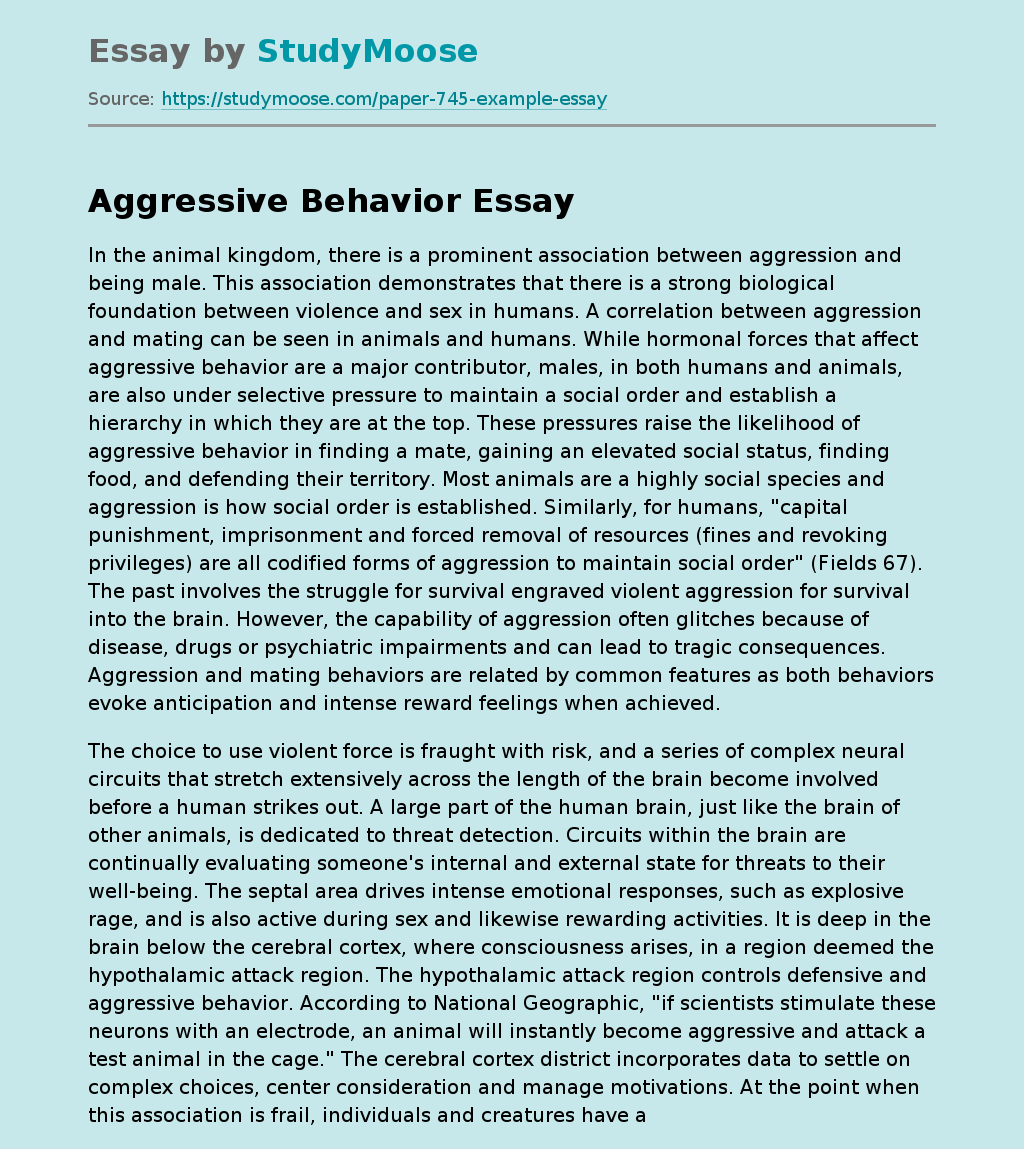