Advertisements are everywhere, traveling by all ways possible, infiltrating the privacy that every person holds important to themself and their family. Ads may travel inconspiciously, while the final message they deliver through radio, tv, or billboards, is a harmful nuisance, and one that may root itself unscrupulously into the unconcious minds of honest people. Companies have taken on such aggressive promotional measures that advertising has become degrading, disruptive, and destructive.

One of the most corrupt forms of advertising comes from cigarette companies.

Don't use plagiarized sources. Get your custom essay on
“ Negative Effects of Aggressive Advertising ”
Get custom paper
NEW! smart matching with writer

Cigarette advertisements are degrading not only because the products behind them are proven to be a health hazard, but because the advertisements are focused toward younger generations. Many advertisements use young, attractive, healthy looking models when advertising for a brand of cigarettes or beer. Company promotions have led people to affiliate certain products with feelings of happiness or euphoria. There is no doubt that people smoke the most heavily advertised brands of cigarettes. “Tobacco advertising increases young people’s risk of smoking by using themes that appeal to them, such as fun times, action, and being popular and attractive.

” (Family Education 1). Ads that supply the Surgeon General’s warning along with the main body of the message are blatantly contradictive. These ads prove that there are many forms of advertising without any morals, and that companies will go to great lengths to have their name and image promoted regardless of the results. The nation’s companies have put themselves before the children.

Visual product promotions may not only corrupt viewers, they may also be financially destructive to the communities surrounding them.

A billboard can negatively impact the visual character of the area as well as financially lower the surrounding property values. Local economies don’t suffer when communities control billboards. “A study in Pittsburgh, Pennsylvania found that property values rose as much as two hundred fifty five percent after the removal of nearby billboards” (“Scenic America” 3). Negative aspects of billboards greatly outway the very few, positive, economic upturns a sign may provide. Billboards may advertise products from television companies to tacos. A sign that fufills its purpose may only provide an increase in profit for one individual business, but in turn will cause a much greater loss in local property values and visual pollution.

Visual pollution is the obstructing presence of objects that do not compliment their surroundings. These include stratigically placed advertisements on roads and highways that hinder the aesthetic beauty of consistent, natural surroundings. “I do not think the short term gain such signs would bring to my business are worth the permanent degradation to our scenic roadsides or the insult to our citizens and visitors who have come to expect more of us” (Scenic America 3). Yet, the degenerative billboard industry flagrantly continues to defeat attempts at regulation. Once again, aggressive advertising has demonstrated that some companies will resort in placing themselves before the community.

Not only can advertising be destructive and degrading, it can easily be disruptive. Annoying phone calls may not be considered a dangerous menace, but they do severely disrupt the daily flow of business and personal life. The feeling of invasion is commonly felt when a telemarketer interupts a family dinner, or disturbs a Sunday afternoon nap. The phone call becomes an intrusive cloud that no one cannot hide from. Missouri Attorney General Jay Nixon said, “Ever since the founding of this country you’ve been able to put a no-trespassing sign on your property. With the invention of telemarketing, that no-trespassing zone no longer includes your dinner table” (Savoye 2). There is no purpose for an advertising operation so aggressive that it breaches the privacy of the American home. This type of disturbance indicates corporations are stepping over the boundaries. When people do nothing to stop the actions of telemarketers, it indicates that control is lost and that this sort of aggressive advertising is accepted. It is the lack of rigid control over ruthless telemarketers that implies society has been completely enveloped into a world of infinite, disruptive, worthless persuasion.

E-mail has created a new form of quick, reliable communication, but recently has been shadowed by another form of troublesome advertisement, spam e-mail. Spam has increased so drastically within the past five years that it has created a burden that affects almost any person with an e-mail address. It has even come to hinder the very foundation it was built on. “The explosion of spam today threatens to flood the critical arteries of the networks that carry all e-mail, whether consumers want it or not” (Wenzel 1). Spam has elevated product promotion to a different level where quantities are so tremendous that they block all potential of decent communication. E-mail boxes are so often emptied without the content being reviewed that the advertising email has already destroyed the opportunity of being effective and now poses a hindrance to the efficiency of the entire world network.

Perhaps if the nation depended on a much weaker economy, such aggressive advertising could be relevant even if it destroys the privacy of individuals, the beauty of the nation’s landscapes, or attempts to promote unhealthy habits among children. Some view billboards as nothing more than a harmless structure of posts and panels. Many believe that signs are necessary to provide consumers with the perpetual temptation of newer products. It is understandable that entrepreneurs want to make money, but, morally, these aggressive actions by companies should not be endured even if the economy did make a turn for the worst, and they certainly should not be commonplace now.

Aggressive advertising is an infestation of termites knawing at the honest framework of society. Much of the work in promoting products involves a dishonest form of thinking, and one that strives to root itself into the next generation. Advertisements have infiltrated almost every part of the nation and have manipulated the very core of society. Corporations have been to the extremes of advertising, only to create ads that disrupt, degrade, and destroy the quality of life. 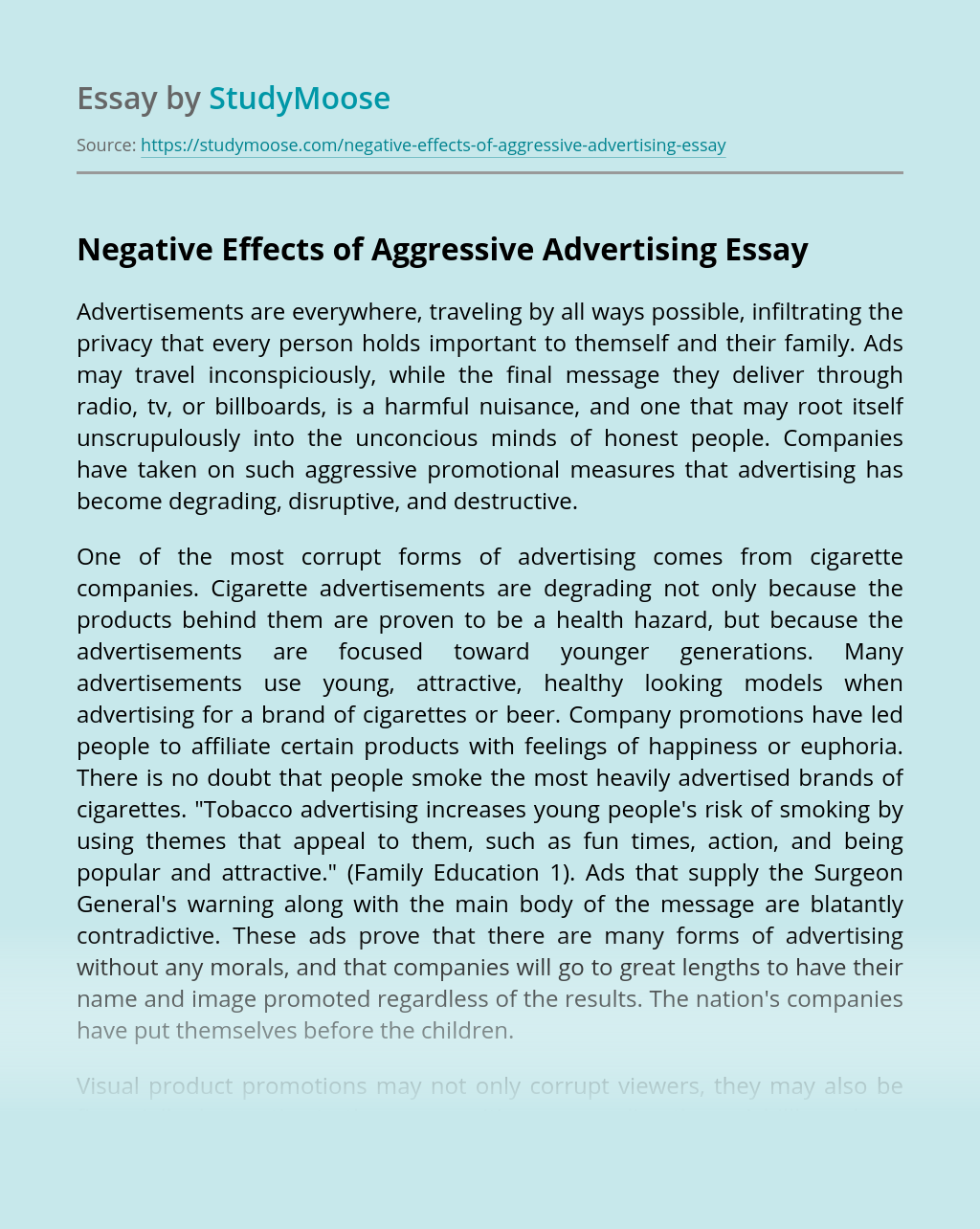