In this paper I will be discussing the company Panera Bread, its history, and how they decided on the business strategy that the company uses. I will also give a description of Panera’s strategic vision and how its stakeholders enable the success of Panera. Panera was built by Ron Shaich and originally started out in 1980 with a little store that used to be called the Cookie Jar. After three decades, a merger, and an acquisition later, Shaich’s empire turned into what we now know and love as Panera Bread.

Shaich started this bread empire when he was attending Clark University and was kicked out of a convenience store that didn’t cater to college students. So Shaich, who was the treasurer of the student body, decided that the college should make their own store, and that is exactly what they did. After running this store for the college, Shaich loved it so much that he decided to open his own store called the Cookie Jar, and in an effort to expand his offerings he became a licensee of the French bakery company, Au Bon Pain, whom later on merged with his company.

Kowitt, 2012). Later Shaich stated that “[he] was worried because the French baked goods we sold at our half-a-dozen stores were becoming pedestrianized. We decided to use the croissant and bread as a platform to sell soups, salads, and sandwiches” (Kowitt, 2012). This is where they started becoming the store we are familiar with, however they had one more change to go through before they evolved into their current format.

Shaich soon realized that this is where the gem of his business was located, so he changed the name to Panera, changed the environment to encourage people to gather, and sold off the other portions of his company such as Au Bon Pain. (Kowitt, 2012). This was the turning point for the company where Shaich decided to make the full business strategy for Panera to be that of the bakery cafe set up. With a vision of providing good quality breads and foods, with excellent customer service, this is key for while other companies have cut back due to the economy.

Panera has continued their game plan to ensure the greatest experience for their customers. If you walk into other companies restaurants you will see longer lines, waits, and dirty tables due to those companies cutting back, whereas Panera continues to invest in labor in their cafes and the quality of their workers, as well as in the quality of their food. (“How panera bread,” 2010). This is their long term strategy and what I believe is the key to their success and the most important part of their strategy.

They put emphasis on the quality of their food and the dining experience; this has really won over the customers that want a fast, clean, and healthy dining experience. This business plan of taking care of the customer first is due to the fact that the stockholders, and Shaich, who is the largest stockholder, allow Panera to remember that they started the company to provide quality service to customers, not to make money. Realizing that the stock price is a byproduct of them ensuring the customers are happy, and not the whole point of the company.

A lot of companies think only of profits and hitting the bottom line, whereas Panera views their role as delivering a valued service to their customers. (Shaich, 2011). Shaich states that “We have to spend less time figuring out how to extract economic value from our stakeholders and more time creating what is valuable to them. Doing so is what ultimately creates long-term value” (Shaich, 2011). Arguing the fact that if you make sure the service you are providing is great then the customers will come, and your stock value will rise.

Just like the old adage “if you build it they will come” this is the same thing, if you build a clean friendly restaurant with quality food, then the customers will come and spend money, and this is exactly what Panera has done and why they are so successful. My recommendation to Panera is to continue doing what they are doing, ensuring that the food and service quality at their restaurants stays at the high level that they already are.

Never forgetting that this is what brings them long term profits, and to always keep that goal in view, instead of stripping down their services to create vast short term profits, but hurting customer loyalty and future sells. In conclusion we can see that Panera was able to start from a small little cookie store and transform into the huge restaurant chain it is today by focusing on taking care of their customers and not just looking at the bottom line of a balance sheet. 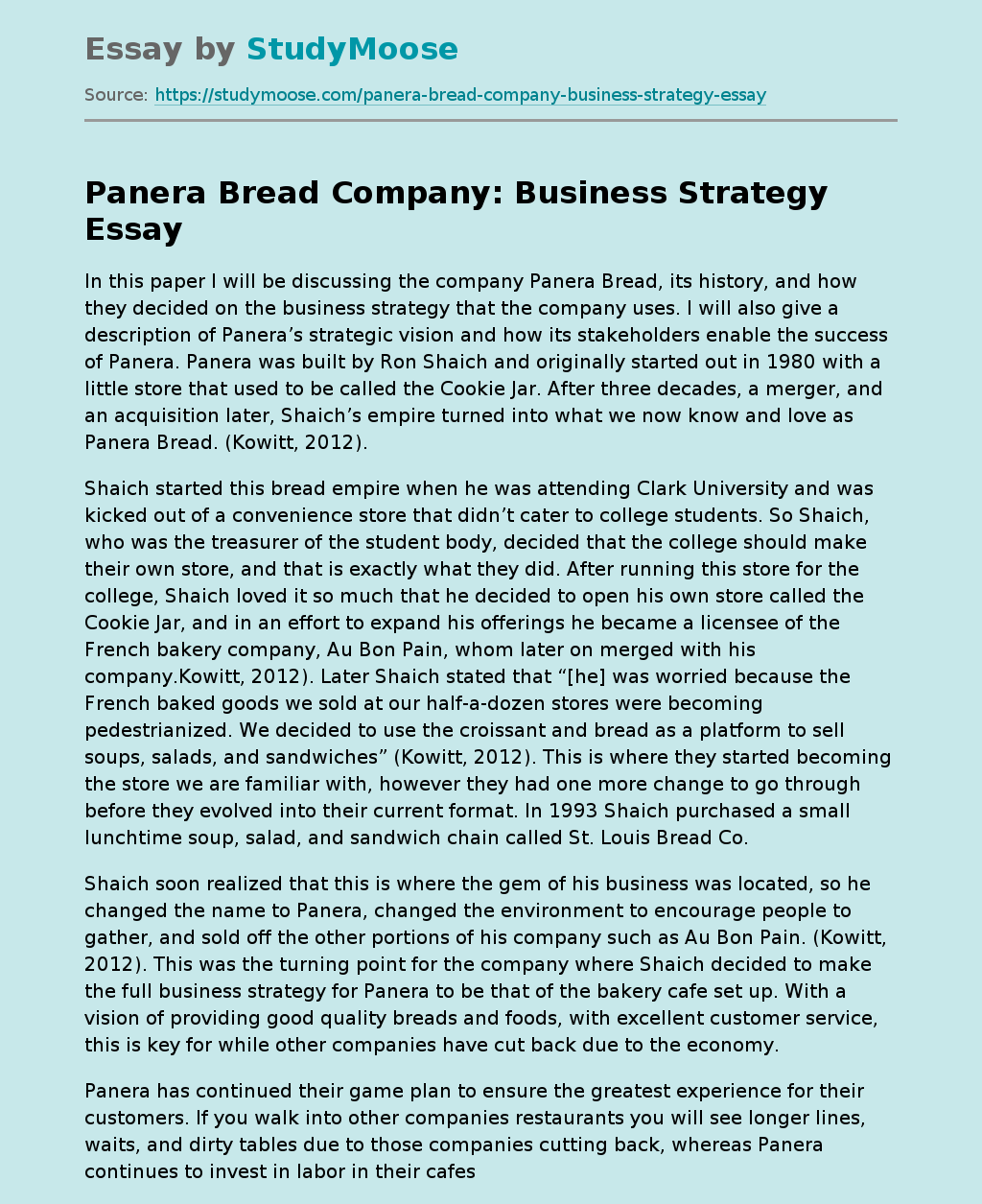