1. In assessing Newell Company’s corporate-level strategy and whether the company adds value to the businesses within its portfolio, it is necessary to identify its overarching strategy and then explain it with context to how it affects the various businesses within the larger corporate body. Newell Company’s main corporate-level strategy as defined by Dan Fergurson was “build on what we do best”. The company focused on growth through strategic acquisitions of firms that sold low cost and high volume products to large retailers, but that were underperforming due to high operating cost.

After an acquisition, Newell would then change the existing operational systems of the firm to align it with its corporate structure. The aim was to increase operational efficiency and profitability and to focus it on a key product. In 1990, Newell also recognized the importance of internal growth and included it in its corporate-level strategy.

Newell’s corporate-level strategy had a high level of positive impact because it was internally consistent.

The corporate office maintained control over legal, administrative and financial functions while allowing individual divisions to control marketing, manufacturing and sales. It also retained strict control over each division’s product lines as it disallowed any deviation from the key product focus defined by Newell. This ensured that the decisions made by various divisions remained in line with the Newell corporate office strategies. Overarching company goals were also aligned with its business strategies and acquisitions, and this was beneficial for the various companies it acquired over time. One of Newell’s corporate strategies was selling products across different price points.

This remained in accordance with its goal of being a provider of low cost and high volume goods to large retailers and helped to keep the company competitive against new entrants to the different price categories.

This was advantageous to businesses under Newell as its respective product lines were able to retain important shelf space, ensuring better sales of products. Focused growth via streamlining strategic acquisitions was enabled by Newell’s appropriate use of available resources. One of Newell’s core competencies was its operational efficiency and its system of bringing acquired companies to its high standards of efficiency and profitability. Its success in the streamlining process can be seen from the rapidity with which changes were made and the results of the process. As stated in the case study, “Newellization” typically took “less than 6 months” to implement. After acquiring Anchor Hocking, the management from Newell achieved cost savings by letting go of unnecessary resources within the company such as its glass factory and its retail stores and introduced new systems which helped to bring about improved efficiency such as reducing its customer lead order period from “18 to 7 days”. While the businesses within Newell may have encountered issues due to the restrictions on innovative growth, they ultimately benefited from the focus on operational efficiency and cost savings resulting in higher operating margins.

Newell’s corporate-level strategy was reasonably dynamic relative to the environment. While it maintained a strict focus on certain goals, the corporate strategy was also modified to include new ideas that would ensure sustainable growth. This can be seen from the case where Newell’s growth strategy was expanded to include the international market, widening their acquisition target field to include companies based overseas. This was due to the fact that Newell’s target market, retailers like Walmart, was expanding into foreign markets. In 1989, corporate management recognized the importance of internal growth within the respective divisions instead of simply focusing on each division generating higher levels of profit, and the growth of the company being driven by acquisitions. They reflected this change in attitude by changing the corporate bonus structure to encourage executives to pursue internal growth in addition to its existing goals.

Newell’s corporate-level strategy was effective for many years as can be seen from the fact that it had higher returns to investors compared to the S&P 500. This was due to a number of factors such as maintaining internal consistency, efficient use of resources and keeping corporate strategy dynamic relative to the changing environment. Businesses acquired were in synergy and this was beneficial to individual businesses in ensuring less wastage and improved levels of service and efficacy. In addition, businesses were also able to take advantage of Newell’s economies of scale and economies of scope. However, despite its positive financial returns, as financial returns are indicative of past policies being effective, it would not be symptomatic of future success. Newell’s strict enforcement of focus on key product lines without allowing for more innovative expansion of those product lines could lead to much slower levels of growth after initial operational synergies were realized. This would in turn be detrimental in maintaining its competitive advantage in the long run.

4. While the acquisition of Calphalon could pose some problems in the integration process, it was aligned to Newell’s overall corporate strategy and would be beneficial to Newell in the long run if Calphalon was incorporated without eroding its premium product offering. Calphalon’s acquisition was beneficial to Newell in two ways. It allowed Newell to branch out into new markets that had not reached saturation without cannibalizing its existing product lines. While Newell focused on mass market retailers such as Walmart and Home Depot, Calphalon’s products were sold to high end retailers such as Williams Sonoma and Macy’s. Calphalon’s product offering and strong brand recognition would enable Newell to reach out to the premium market and diversify its product portfolio further. At the same time, Newell’s strong focus on customer relationships and Calphalon’s attitude of building partnerships with its retailers are similar and would ease its assimilation into the firm.

Calphalon’s pull strategies could also be leveraged by Newell to differentiate its product portfolio from other low cost competitors, enabling it to maintain its existing market share. Newell’s core competencies would be useful in reducing Calphalon’s rising costs while concentrating on its strength as a premium product. As can be seen from the financial statements, cost of goods sold increased significantly from 1996 to 1997 without a correspondingly large increase in revenue. The problems faced by Calphalon in terms of operations would be easily manageable for Newell given its strong background in operational efficiency and its experience with assimilating acquisitions to its corporate system. However, as Newell’s product offerings were primarily utilitarian while Calphalon’s products focused on an emotional connection between the product and the premium end user, Calphalon’s integration into Newell would be more delicate than other acquisitions.

As the “Newellization” process typically removes the acquired company’s systems to replace it with Newell’s system, its stringency could erode Calphalon’s brand equity as a premium cookware producer. While this would be difficult, it would still make sense in the long run given the potential benefits to Newell and the relatively low amount of risk present in the acquisition. The acquisition of Rubbermaid would seem beneficial given the numerous advantages that Newell would gain, but the many complications associated with the process as well as the fundamental differences between Newell and Rubbermaid make the acquisition too risky to undertake, and thus strategically unsound. The advantages associated with the Rubbermaid acquisition are obvious. Rubbermaid fit into Newell’s criteria for acquisition. It sold targeted product lines to mass retailers, and had strong brand equity. It also suffered from troubled operations, which “Newellization” would help to address. In addition, the purchase of Rubbermaid would enable Newell to “cross the $10 billion threshold” that would in turn lead to an increase in market power against retailers like Walmart who implemented harsh policies which were nonnegotiable.

However, these advantages are offset by a number of issues. Newell and Rubbermaid, while pursuing the same product offerings, had fundamentally different bases for competitive advantages. While Newell focused on operational efficiency, Rubbermaid was known for its product innovation. This would mean that the processes that helped to streamline Newell-led companies would probably lead to the erosion Rubbermaid’s core competencies. At the time of the acquisition, Rubbermaid was only slightly smaller than Newell. The integration process would be more complicated and difficult due to the fact that Rubbermaid had many different product lines, all of which would have to changed to fit Newell’s corporate system.

At the same time, Rubbermaid’s large size would mean that it would be more challenging for Newell to change corporate strategy without alienating the existing workforce. Both of the factors above combined would mean that in order to pursue the acquisition and realize all the benefits associated with it, it would be necessary for Newell to change its corporate strategy to address the differences between Newell and Rubbermaid. However, this was not mentioned in the case study. Thus, without implementing a large-scale change in Newell, it would be difficult to merge both companies to create synergy and value for the overall firm. The difficulties in integration, the high risks associated with the integration, and the lack of change in Newell’s corporate strategies translate to an illogical acquisition by Newell. 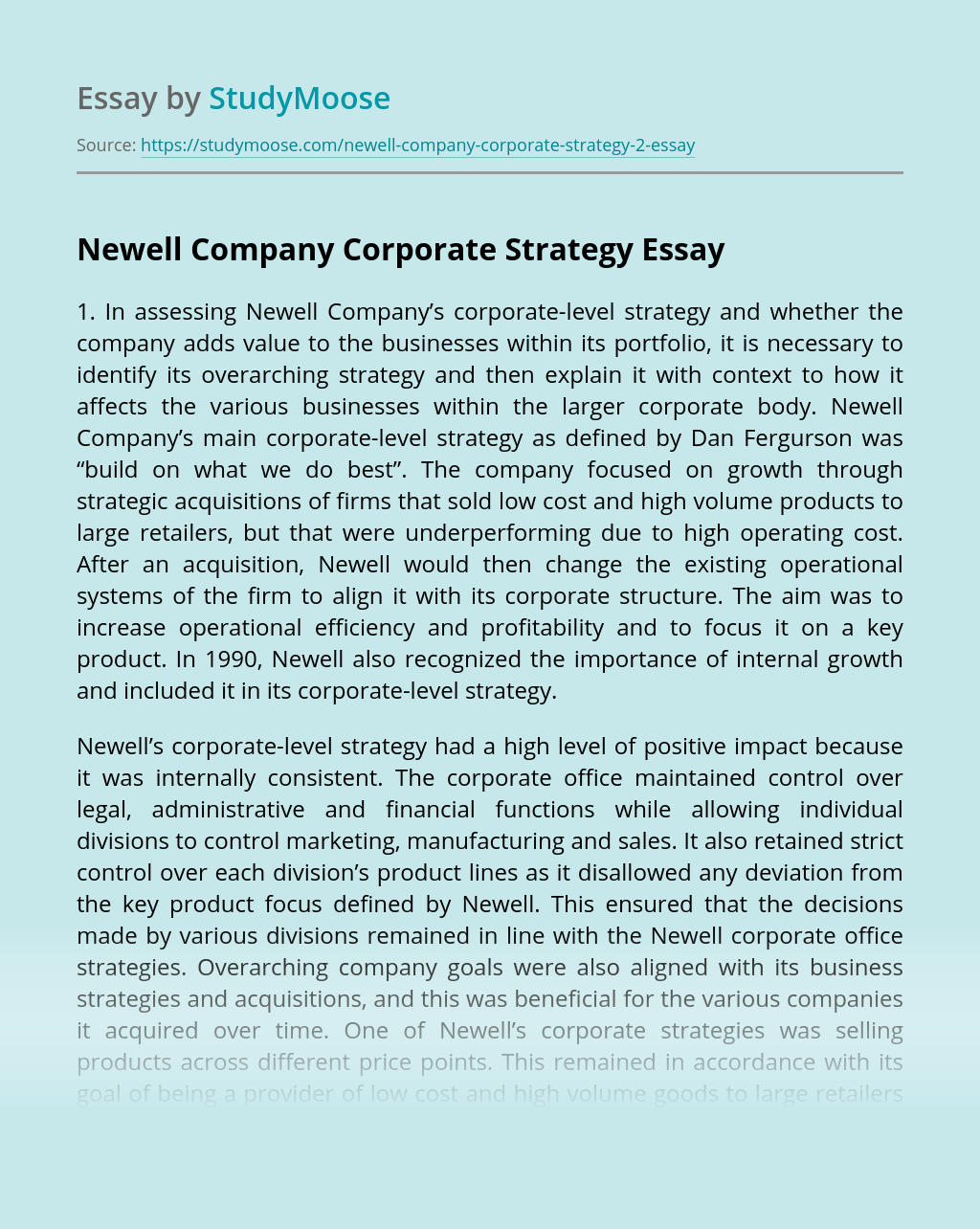 Responsibilities and Duties of an HR Manager

Human resource (HR) department deals with wide range of activities from strategic planning level to the day to day operations level. Therefore defining roles and responsibilities of HR manager is a quite complex task so that I would say about few, main function. Human Resources staff members are advocates for both the company and the...

Get Essay
The KBR Swindon

INTRODUCTION The KBR Swindon warehouse facility is responsible for the receipt, storage, maintenance and out-loading of equipment in support of KBR global contracts. It is also the long-term storage and logistic facility for UK KBR based projects. The Warehouse Manager has overall Health and Safety responsibility for all the projects working out of this facility....

Royal Dutch Shell is a global oil and gas company which faced an extraordinary challenge in 2003 when Navjor Singh joined as the Global Marketing Manager. Navjor Singh was previously employed by DaimlerChrysler as the marketing director, which he initially started as VP of customer service relationship management, but based on his skill sets and...

Standards to Evaluate goals: I have a lot of critical success factors to evaluate the Ford Motors goals and ensure that it gets accomplished. Some of standards are financial and others are non-financial and some of them are quantitative and others qualitative in nature. I have judged the performance goals with at least these three...

If Philip Anderson's decided to quit from the company

If Philip Anderson’s decided to quit from the company, another alternative that he can choose is to open up his own business in the same industries which is brokerage industries. If he decided to open his own company, Philip does not need to worry about the management of his new company since he has enough...

Strategic decision-making is that the method of charting a course supported long-run goals and a longer-term vision. Google’s culture is mirrored in its higher cognitive process similarly. choices at Google square measure created in groups. Even the corporate management is within the hands of a triad: Larry Page and Sergey Brin employed Eric statesman to...