My view on things has changed a lot since I read this book. A movie, a death, a church and friendship, “The Outsiders” has it all. A story of brotherhood, friendship, and of a murder, a boy and his friend are caught in a murder, they have to escape form getting caught by the police, and so they run away, starting their journey of friendship and hardships.

After reading the novel and watching the movie I noticed some differences, I’ll start with Ponyboy, in the novel pony boy is slapped by his brother, but in the movie, he is pushed, I think the actors couldn’t fake the slap or wanted to harm the actors, this difference wasn’t very good it took away some of the drama.

Don't use plagiarized sources. Get your custom essay on
“ “Outsiders”: Compare Contrast Movie to Book ”
Get custom paper
NEW! smart matching with writer

Another difference is that in the movie it ends shortly after Dally’s death and in the novel a lot happens after that; this was a very bad change to the film, like pony boy breaking the glass was definitely a point that made the novel more enjoyable.

Proficient in: Comparing a book to a movie

One similarity in the book and novel is that in both he cuts his hair and dyes it blonde.

Johnny also had some differences in the novel and in the film in the novel Johnny is jumped and has a large scar across his cheek; in the movie it isn’t very noticeable. This difference is good because it would attract a lot of attention instead of the viewer focusing on other things. In the movie and novel he has his jean jacket that he wears throughout much of the movie.

There is also Dally still has his outlaw look of his troublemaker self, this was very important the book and movie. Also in the book he robs a drugstore, but in the movie he takes a book and rips it up then scares the cashier then runs away, this was an okay change, it did not make a lot of difference, maybe the director thought it would stir up some more action.

Some events also had their differences, in one of the church scenes; Ponyboy and Johnny try to catch a rabbit in the film version, in the novel version there was no bunny catching. The movie might have needed something more, besides the boring ordinary church scenes. This change was good because it added some humor.

During the rumble scene in the novel, they use weapons in the fight, but in the movie, it showed no one using a weapon, perhaps the director wanted to depict it as a more of a fair fight, to make the victorious win more enjoyable without the cheating. This change was difficult to decide whether it was good or bad it was a neutral change for me.

During the hospital scene where Ponyboy meets with Darry and Sodapop, in the novel it was a very emotional moment, complete with tears, but in the movie, it was just a very brotherly hug it took away the emotion, perhaps the actors could not cry on command.

The Outsiders was a book about three brothers fighting to stay together as a family and not go into orphanage. A Story of Brotherhood, about sticking together through good and bad, Ponyboy Curtis and Johnny Cade, two friends that made it through. After reading the book and the movie, this has been a very exiting adventure for me and for many others. Remember to Stay Gold! 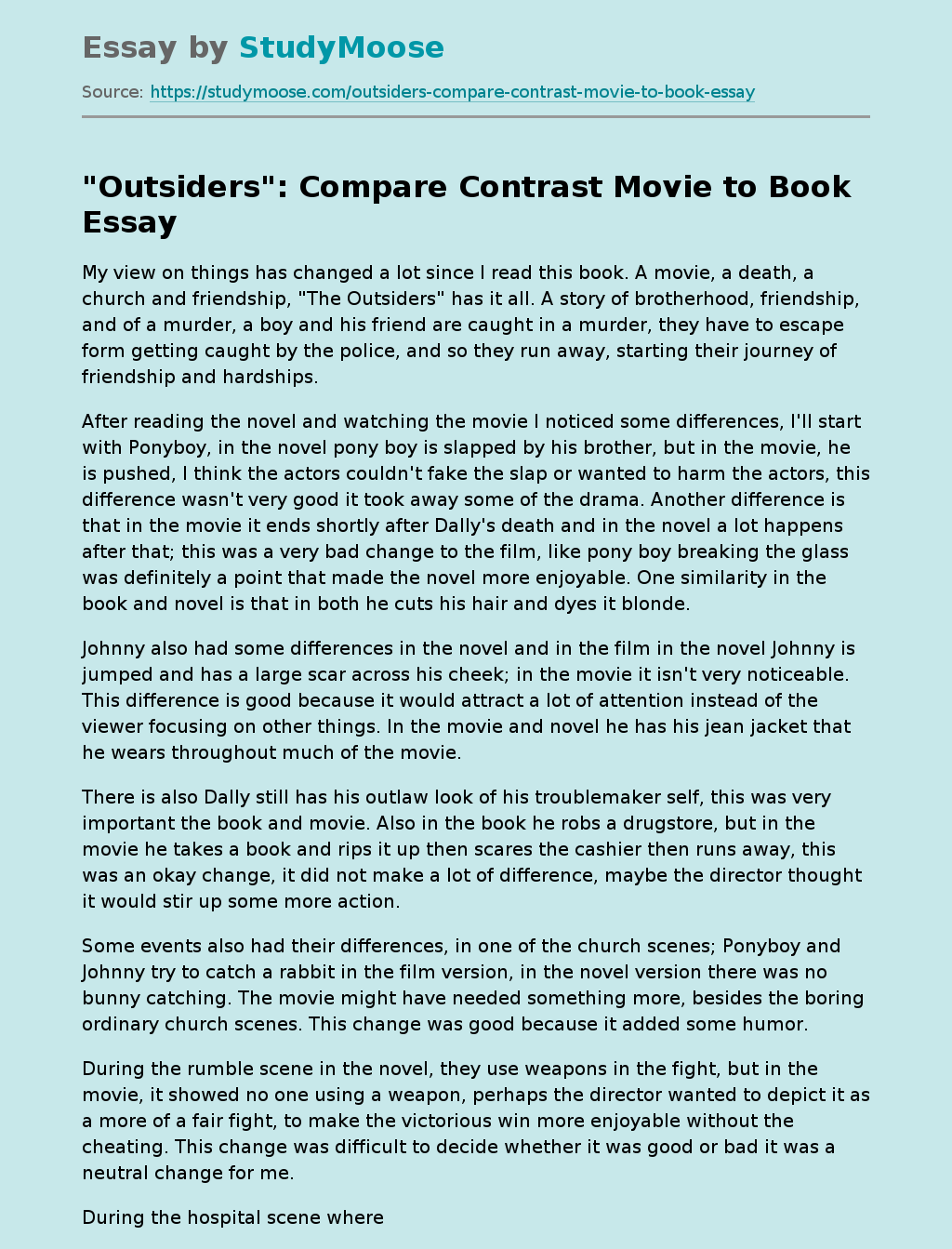