Outline and Evaluate One or More Biological Explanations of Schizophrenia

Outline and evaluate one or more biological explanations of schizophrenia. In your evaluation you should refer to research evidence. 24 marks According to the genetic hypothesis, the more closely related the family member to the schizophrenic the greater their chance of developing the disorder. Evidence from twin, family and adoption studies has tended to indicate schizophrenia to have a genetic component although a major problem is separating out environmental influences.

Recently gene mapping studies have been performed that compare genetic material from families with a high and low incidence of the disorder with results indicating several genes rather than a single one to be at work to produce increased vulnerability to developing schizophrenia.

Don't use plagiarized sources. Get your custom essay on
“ Outline and Evaluate One or More Biological Explanations of Schizophrenia ”
Get custom paper
NEW! smart matching with writer

Support for the genetic argument was provided by Gottesman and Shields 1976 who reviewed 5 twin studies to find a concordance rate of up to 91% between MZ identical twins with severe forms of schizophrenia implying genetics to have a bigger influence on chronic schizophrenia.

This was further supported by Kety et al 1992 who identified schizophrenics who had been adopted and compared the rate of schizophrenia to be 10 times higher among biological relatives, implying genes to play a much larger role than environmental factors.

However Leo 2006 argues Kety et al’s evidence to be suspect as sample sizes were small making generalisation difficult and many of the biological relatives were rather distant ones such as half siblings and therefore low biological similarity.

In addition twin studies have not gone without criticism either; they may suggest a genetic influence but often do not consider the influence of social class and socio-psychological factors between twins.

Furthermore Hedgecoe 2001 argues that scientists have tried to construct schizophrenia as a genetic disease by using evidence from twin and adoption studies in a biased way to create a narrative about schizophrenia that subtly prioritises genetic explanations.

Also even in rare cases where MZ twins are reared apart they still share the same environment in the womb before birth so the contribution of environmental factors cannot be entirely discounted. A second biological explanation is the dopamine hypothesis which believes schizophrenia symptoms occur as a result of overproduction of the neurotransmitter dopamine or of a super-sensitivity of the dopamine receptors.

Supporting evidence for the dopamine hypothesis comes from research into drugs that influence dopamine levels in the brain. In healthy patients these drugs induce effects similar to Parkinson’s disease and research has indicated that Parkinson’s disease is the result of a lack of dopamine in an area of the brain called the basal ganglia. Amphetamines seem to increase the level of dopamine in the brain and research has shown that giving amphetamines to sufferers of schizophrenia often worsens their symptoms.

It is not as simple to say schizophrenics have too high dopamine levels, for example other factors such as cognitive dysfunction and abnormal brain development (enlarged ventricles) also impact the occurrence of schizophrenia. There is also a lack of consistency in the evidence as some studies have found higher levels of dopamine function but others have not.

This lack of reliability may be due to the reductionism of just focusing on dopamine. Additionally dopamine does not account for the variety of schizophrenic symptoms and seems more relevant to the positive symptoms. Finally effectiveness of drugs used to target levels of dopamine do not work for all patients and whilst they block the dopamine receptors immediately, symptom relief takes days or weeks, which shows there is not a direct link between dopamine and schizophrenia.

Outline and Evaluate One or More Biological Explanations of Schizophrenia. (2016, Oct 20). Retrieved from https://studymoose.com/outline-and-evaluate-one-or-more-biological-explanations-of-schizophrenia-essay 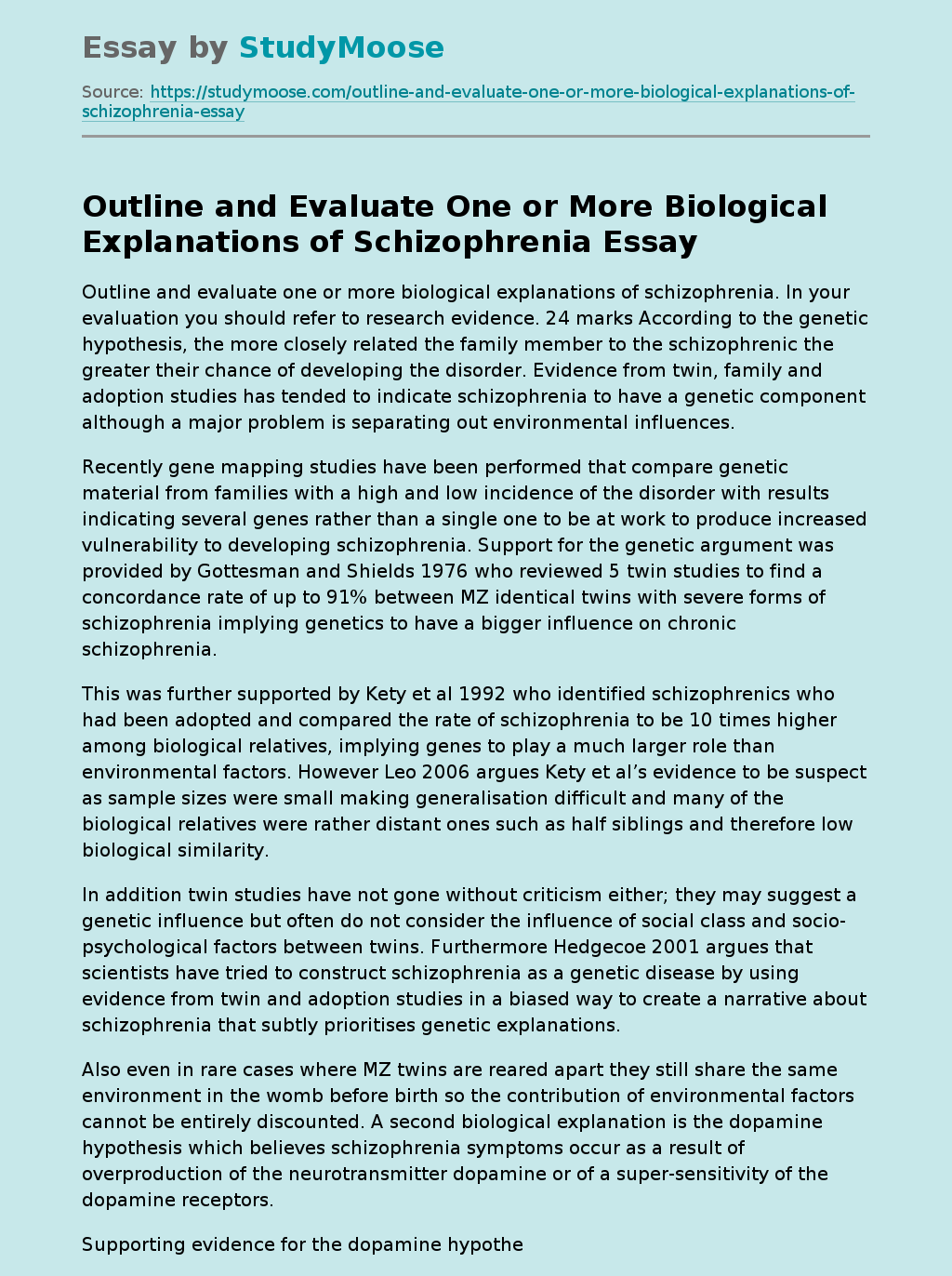