Optimus Prime last of the Thirteen Primes, the pinnacle of Cybertron evolution and their self-made robotic achievements is a leader well known throughout the world. Debuting along with the Transformers franchise, Optimus, who has been a symbol of selfless inspiration for decades, is highly admired by both children and adults galore. This massive “cybernetic-alien” is leader to the Auto-bots a small team of self-configuring lifeforms known as Transformers battling against the wicked Decepticons. These Decepticons, fueled by jealousy, aim to take rule over Cybertron and eliminate the Auto-bot rebellion just as they prove to be a perfect contrast to Optimus Prime.

Don't use plagiarized sources. Get your custom essay on
“ Orion Pax ”
Get custom paper
NEW! smart matching with writer

Optimus Prime’s integrity is one of his most remarkable traits in the Transformers cinematic universe. Notably present in his followers, this level of integrity is what drives the Auto-bots forward in battle; this unwavering drive and high morality is the core of this popular film series. Optimus strongly believes that “freedom is everyone’s right,” and he opposes anyoneOUtside daring enough to attempt to take it away from others (hence the battle between the Auto-bots and the Decepticons).

As a matter of fact, Optimus even brings himself to fight against Sentinel Major a fellow prime, for the greater good and protection of humanity. Unfortunately, this constant sense of high morality oftentimes places the hero in very dangerous situations.Optimus’ actions deem him a very selfless character. Going off his beliefs in what is wrong and what is right, in Revenge of The Fallen, Prime places his life at risk when fighting his arch-nemesis, Megatron, and his accomplices, Starscream and Blackout.

Throughout the span of this fight,  Optimus Prime is seen holding off against these three without any help in order to protect the protagonist, Sam Witwicky; the resulting battle was great but sadly ended with the death of Prime. Another great example of his self-endangering selflessness for the greater good is present in the fight against Grimlock in the Age Of Extinction Optimus faced off against the fire-breathing, lizard king in order to gain an upper hand and have the dino-bots in his arsenal against his assault on Lockdown, a formidable foe with superior means of killing Decepticons and Auto-bots alike.

With this in mind, very few can deny that Optimus Prime is extremely valorous; there is no question to this when taking in his continuous duty in protecting the freedom of the human race. His overwhelming courage brings him to attack not only strong opponents but massive crowds, whether he is on his own or not. When Prime arrives at the battle to take back Chicago in Dark of the Moon, he flawlessly decimates a fleet of Decepticons, taking out Shockwave and stopping the destruction of the Earth to resurrect Cybertron in a single coordinated attack, before being brought face to face with Sentinel Prime all without any visible signs of hesitation.

Orion Pax (later known as Optimus Prime) was nothing more than a mere scientist back on Cybertron before he was elected to carry the title of Prime, next in line to the position as the leader we all know and love. He wasn’t always valorous, selfless, not full of integrity, but alongside his mentor, Alpha Trion, the High Council was able to see his true potential proving that “there is always more than what meets the eye.” 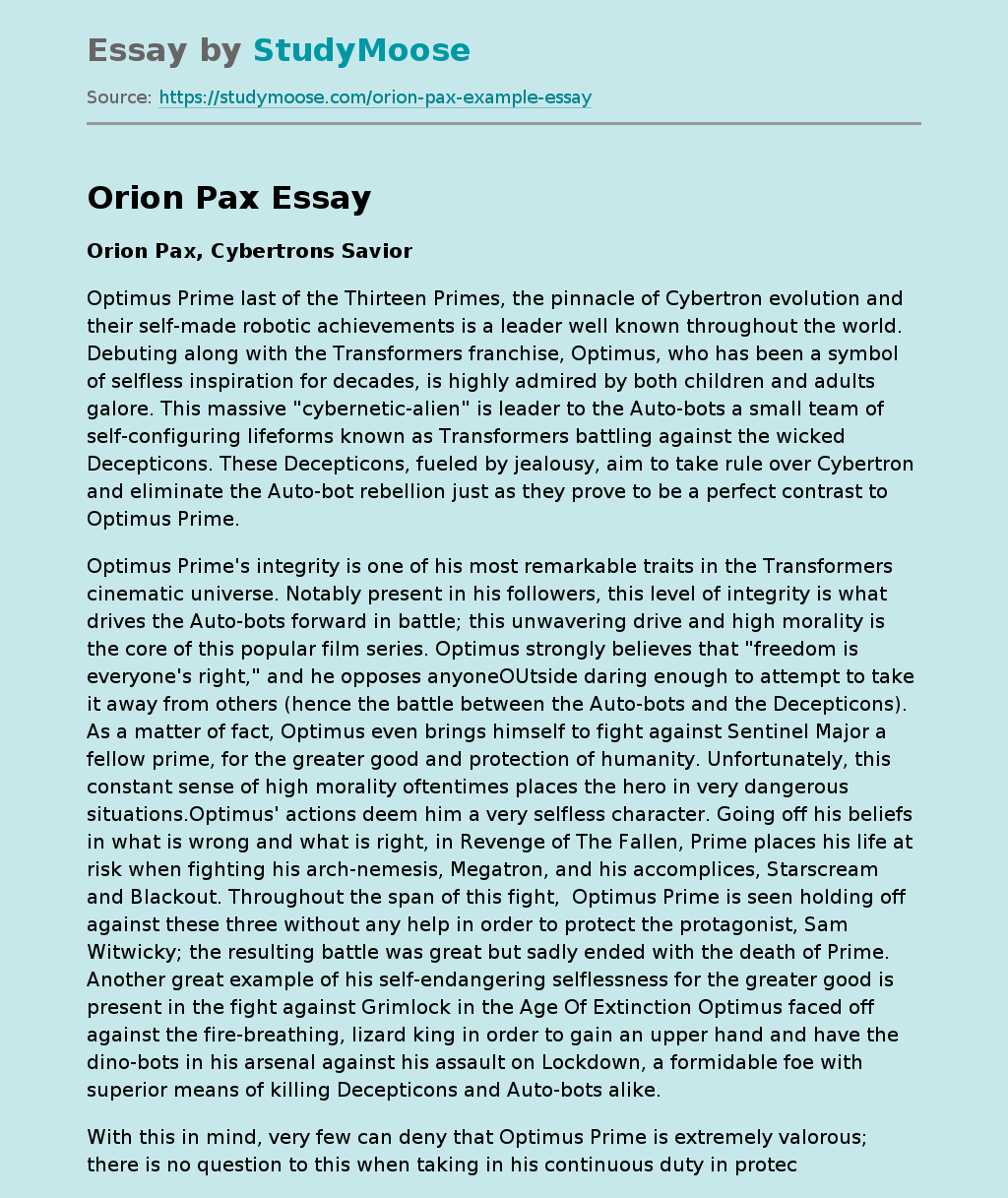