Our Life is one long Journey, with good as well as bad times in it. From childhood to old age, we strive forever to experience and learn, often positive as well as negative turns in life often bringing upon one a lot of change. In the poem ‘originally’ by Carol Ann Duffy, one reads about a seemingly sudden change in a Childs life, where one is confronted with leaving their home, their country, to live somewhere else unknown. In ‘Originally’, which is divided into three parts, one follows the experiences of a speaker, who seems to have been forced to leave his or hers home, change and crisis being endured, and how the speaker in the end effect, slowly, adapts.

Turn in your highest-quality paper
Get a qualified writer to help you with
“ ‘Originally’ By Carol Ann Duffy ”
Get high-quality paper
NEW! AI matching with writers

The Poem though seemingly talks about this child leaving its home and changing, the Poem also shows how People all there lives change, starting by growing up to become a teenager, then to an adult and in the end to an aged person.

The Poem starts of with a type of introduction; it begins the Poem by setting up a mood, by explaining how she moved with her family. The speakers love for her homeland is exemplified by using domineering words such as ‘own’, which makes it seem as something unique, and also by telling the reader that her brothers were ‘bawling’ the word ‘home.’ A combination of alliteration and imagery in the first line “red room” and “fell through the fields” also helps emphasize this. All of these rather unsympathetic words encourage a development of a depression throughout the Poem.

The personification of the ‘miles (which ran) back to the city…’ seems to indicate how, while being on this train, makes the child feel worse and worse knowing its becoming more distant from its homeland, and this reflecting that the land is passing so quickly it seems to be running away past.

The whole stanza mainly concentrates on the child and its family, except for the last line, this sudden change also brings up strong emotions because from one image of leaving the place you have always known to be your home, one suddenly notices how scared this child must me when the speaker says that it ‘stared/at the eyes of a blind toy, holding its paw’ it shows how terrified it feels and how it only has her old trustworthy bear with her to help her. The Bear being blind seems symbolic, suggesting that the speaker does not know what will become of its family in their new home, and much like an old toy is often blind because it has lost its eyes over the years.

In the second stanza one learns about the problem the person had to go through once it had arrived in its new homeland. The first line ‘all childhood is an emigration’ fittingly captures the themes of the entire poem it shows how especially in ones childhood one changes all the time, teenager, Puberty, becoming an adult these are huge changes and can also be compared with types of emigrations. Throughout this stanza one learns about what difficulty the child had learning to adapt to the new culture, the accent sounds unfamiliar, kids do things she has not seen any of her friends do in her old homeland, and it shows how people all there lives are confronted with unknown customs and traditions, and one must nearly always learn to live with them, often to such an extent that you don’t know anything else anymore.

The speaker talks about a lot of unusual and seemingly repulsive things like boys eating ‘worms’ or shouting words one doesn’t understand, in the lines before she also talks about Pebble-dashed ‘estates’, meaning very boring and dull housings. All this also seems to point out that the child seemed to have once lived in a better place, maybe the child parents use to have more money and something happened making them loose everything, and forcing them to move to a cheaper living area.

This also gets reflected when the speaker talks about its ‘parents anxiety stirred like a tooth in my head’ which is a very effective way of explaining the worries and problems the child was confronted with. In the last line the font is though changed to italics representing the speaker talking and for the last time saying ‘I want our own country’, the speaker saying ‘own’ for the last time also shows how the child still doesn’t feel at home and by wanting its own country, meaning its ‘original’ homeland where it lived in before everything else changed.

In the last stanza the Crisis has ended the person has gotten use to its new surroundings and is already feeling at home in this once new place. The mood is still relatively unenthusiastic but the person does start seeing a positive side in things. The speaker incorporates the persons family for a last time, when she says ‘seeing your brother swallow a slug, feel only/a skelf of shame.’ this line links back to the previous stanza with the imagery of worms and slugs, which is not literal, but a metaphor for fitting in.

The simile ‘my tongue shedding its skin like a snake’ tells the reader of the speakers not only of the speakers changed accent but also perhaps refers to many of the speakers old memories and habits which she has had to get rid of as they seem useless in her new home, and the person now in class ‘sounding just like the rest’ also emphasizes it having completely adapted to its (now not so) new surroundings. In the final lines of the poem though the person looks back one last time when being asked, ‘where do you come from?’ by a stranger, remembering its troubles having to adapt and sadness of having leave its once homeland, but now when being asked ‘Originally?’ the child ‘hesitates’ because it doesn’t not anymore if this is now his homeland or if ‘Originally’ means the one he once came from.

The poem shows, in this case, how a child had to suddenly move from its homeland to a new place, strange and bizarre, in its view so different and at first seemingly impossible to be able to adapt, but in the end the child does manage to get over all its troubles, and to adapt to a completely new culture, where people do things it thought know one does.

The Poem seems to use this child’s story as an example, of how much change people have to go through, and that even though it always seems impossible to be able to learn and adapt, one nearly always manages, and even though one does remember how it had once been, lives with it, and enjoys its new way of living. 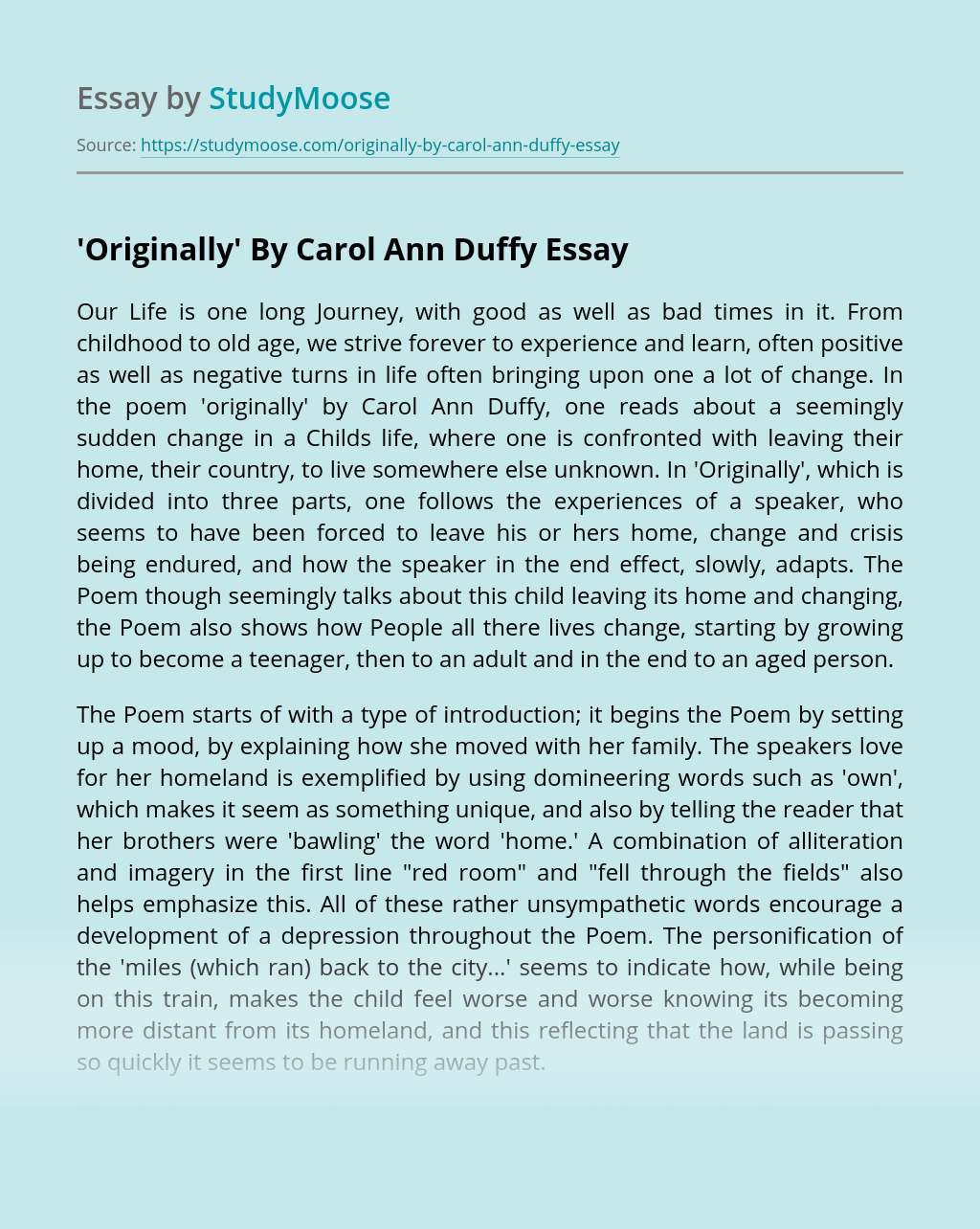 Turn in your highest-quality paper
Get a qualified writer to help you with
“ ‘Originally’ By Carol Ann Duffy ”
Get high-quality paper
Helping students since 2015
Stay Safe, Stay Original