In this study, we look at a grid system where service is required for both parallel and sequential jobs. Backfilling is used, but a margin of error is added to the prediction of runtime of a job. The impact on system performance will be analyzed and the outcomes will be compared with the known optimum runtime case. Two different scheduling methods are considered and the system is evaluated by using a simulation model 14224-26422

Job scheduling using FCFS algorithm is a challenging task when resources are not available for large grid jobs (gangs) consist of number of parallel tasks.

Don't use plagiarized sources. Get your custom essay on
“ Job Scheduling in a Distributed System Using Backfilling with Inaccurate Runtime Computations ”
Get custom paper
NEW! smart matching with writer

One of the promising solutions of gang scheduling is Backfilling.

Backfilling initiates small jobs before large jobs that require currently unavailable resources. The estimated service times of all jobs must be known during job submission or predictions made by the system based on historic data. However neither of the methods is accurate.

This work overcomes such inaccuracies in a way that some jobs causing delays will backfill before queued gang can begin processing.

The system under study consists of two sites including both parallel and simple jobs. Local jobs (simple jobs) will arrive directly at local scheduler whereas grid jobs will first dispatched to a site by grid scheduler then further local scheduler will allocate them to a processor.

This work extends the study in [1] where power of 2 gang sizes were considered.

There are two sites in the simulation model consisting of a local scheduler with 16 processors.

The workload consists of local and grid jobs & three arrival streams, one at grid jobs and one inside the local jobs of each both sites. This work extends [1] where gang size was power of 2 (2, 4, 8, 16) and follow a uniform distribution with values ranging from 2 to 13. Both [1] and [2] results will be compared. The gang sizes were chosen in this study such that average number of tasks per gang in both studies is equal to 7.5.

Communication between two sites and GS(gang jobs) relies on message passing therefore its communication time is negligible. However when a grid job is assigned on both sites extra coordination is needed. Figure 1 shows the configuration of this model.

1) Allocation policies: The GS will determine whether the arrived gang will be dispatched to a new site or stored in a waiting queue. Two approaches are used for this purpose.

If the processor is idle and queue is empty when local job enters a queue,the job execution will start immediately. In FCFS gangs will delay local jobs services that is why backfilling is used in which gang is waiting for service so enough processors are available for local jobs.The local job can start execution before a gang waiting in the queue if following condition is met:

Where service time is run time of local job and elapsed time is the remaining time until gang start execution.

The response time rj of a job j is the time interval between job arrival and completion .The metric used to

Where sj is slowdown of a job and ej is service time.

Average slowdown is given as:

The response time and slowdown of parallel jobs is defined by below metrics. Whenever it comes to parallel jobs each gang need to be weighted with its size.

Figure2 have a higher completion of gangs for uniform

gang sizes and in both approaches; Approach 1 and 2, all gangs complete execution for medium and high workload.

In Figure3 approach 2 produce much better results for gang size of powers of two as compared to uniform gang sizes in figure 2. The result for Approach1 in both Figure 2 and 3 are almost same. Approach 2 results in the completion of 10% more gang than approach1.

Figure 4 and 5 shows that when workload is high approach 2 results in lower WRT and WSLD. The reason behind is that approach 2 minimizes waiting time as gangs tasks can be routed to both sites for execution oppose to approach1.

Figure 6 and 7 shows that for higher workloads, RT and SLD for local jobs are bit higher for approach 2 compared to Figure 4. WRT versus ? for uniform gang sizes Approach1 while gang sizes are uniformed. 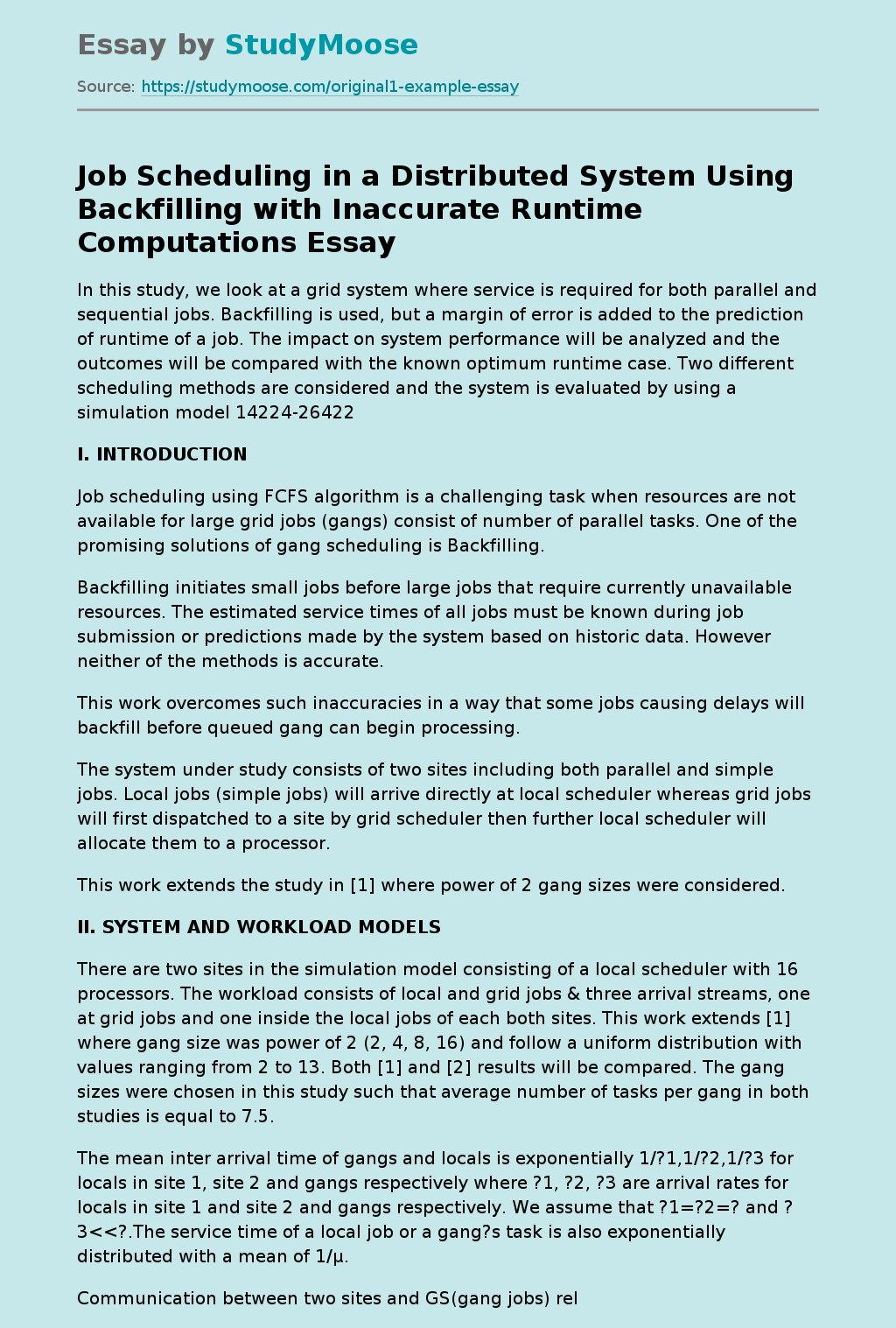