The video game now becomes more than mere entertainment. For years, the violent content in the video game was accused of being the bad influence for the children, even responsible for the violent behaviour problems. In the meantime, many researchers attempt to expand video games’ role in the social and political issues, to make video games a critical tool to engage with the social world (Wardrip-Fruin & Harrigan, 2004). Ideas such as information deficit, simulation rhetoric, procedural rhetoric and emergent dialogue endeavour to explore the way video games sending messages, becoming persuasive, even causing behavioural change (Tanenbaum et al.

+84 relevant experts are online
Hire writer
Don't use plagiarized sources. Get your custom essay on
“ The Video Game More Than Mere Entertainment ”
Get custom paper
NEW! smart matching with writer

, 2013). This research selects procedural rhetoric to be one of the theoretical frameworks to analyse the simulation aspect of the video game, since this theory was not only well-developed but also emphasised on the simulation and procedure in the video game. Moreover, “procedural rhetoric represents the current limit of our ability to design and conceptualise computational systems that support participatory meaning-making processes” (Tanenbaum et al., 2013).

Procedural rhetoric is like simulation rhetoric. Frasca believes that the process of simulation is the way by which the game conveys values, ideas and even real-life skills. Through the simulating the real world, the game places the real world inside the virtual space, allowing the player to experience the possible real-life situations in the virtual world, and pass the knowledge gained in the virtual world to the real world. The concept of procedural rhetoric, proposed by Ian Bogost, is “a particular kind of rhetoric, one focused on the art of using processes persuasively, just as oral rhetoric focuses on using the spoken word persuasively, and visual rhetoric on using images persuasively” (Bogost, 2007).

The reason this rhetoric is effective lies in the key characteristics of video games: running processes and executing rule-based symbolic manipulation. Because of these two characteristics, the game sets up an Aristotelian enthymeme an incomplete argument that the player completes through play. In a video game, there is a source system and a procedural model of that source system. Through playing the game, the player develops his or her own understanding of the modelled system and about the source system. It may match the designer’s world or not. “The inherent subjectivity of video games creates dissonance-gaps between the designer’s procedural model of a source system and a player’s subjectivity, preconceptions, and understanding of the simulation” as Bogost points out. That creates the conditions for video games to communicate ideas: they allow the players to compare the simulated world with their own world. And more importantly, the designers still control the rule system, therefore, even though the inherent subjectivity may allow the player to “negotiate” through playing, the flow of the play is still under the direction of the designer. Thus, the idea or value hiding behind the gaming process is communicated to the player during play.

Later, Simon Ferrari further developed this idea. His research seeks to establish a theoretical framework to understand the relationship between procedural rhetoric and virtual space and play. He believes that the persuasive power of the video game is subject to manipulation through player choice. Ferrari recognises procedural rhetoric as the primary meaning-making structure in games, but also suggests that players through play express themselves. His research suggests that games can be judged inter-subjectively that is, in a way that accounts for the objectivity of their rule-sets and the subjectivity of player experience. He proposes to examine the persuasive power of the video game from three dimensions: rule, space and play. Also, he clarifies the higher and lower orders of ludic expression, in space, there are spatial structure and mise-en-sc?ne, and in play, there are reflective and determinant play. Rules cannot be distinctively classified for that the distinction is established subjectively during gaming experience (Ferrari, 2010). His approach echoes the video game ecosystem, which the interaction between centres generates meaning. Hence, this research adopts this theoretical framework to comprehend the simulation aspect of the video game with some emphases. First, since this research will investigate the shared elements between the video game and narrative via ludo-narrative, and the mise-en-sc?ne overlaps with the dimension of “the world” in ludo-narrative, the analysis of the space will be further emphasised on the spatial structure. Second, former studies (Wolf, 2001; Juul, 2001, 2004; Anil and Ramakrishnan, 2015) reveal that time plays a significant role in the meaning-making process, thus, this research will stress the effect of time in the analysis, especially during the analysis of rule and play.

“The question of whether games are a form of stories has become a prominent issue among the practitioners”, as Aarseth puts forward (Aarseth, 2012). Many researchers have presented their arguments and models on this issue. Murray’s research suggests that the computer has generated more possibilities of expression available for storytelling, under the assumption that interactivity and storytelling become a unified whole (Murray, 1998). Accordingly, she proposes that scholars could apply the narratological tools and models to conceptualise and examine video games for that “games are always stories” (Murray, 2004). To study the video game as a narrative, Vladimir Propp’s work may be most helpful. Propp has devoted his life studying folktales. His research, instead of fixating on the text, reduces the story into algorithms, turning narratives into a verbal equation. This approach is inspiring due to its high abstraction. Propp has identified 31 story segments, which he defined as his functions, and eight broad character types which moved through his functions (Propp, 1984a, 1984b). Propp’s model has been examined and employed by many researchers under several circumstances (see Grasbon and Braun, 2001; G?bel et al., 2005; Brusentsev et al., 2012). Despite how enlightening this approach is, Propp’s model mainly targets at the interactive storytelling, which means this model is most effective when working with games with a clear storyline.

Aarseth brings forward the idea of ludo-narrative, based on the traditional narratology. He criticized the former studies on the so-called “ludology vs. narratology” debate for lacking a rigorous narratological analysis. Aarseth questions the “sloppy scholarship·applying the theories of literary criticism to a new empirical field without any critical reassessment of the terms and concepts involved” (Aarseth, 1997). However, Aarseth points out that the challenge a ban on the use of narrative theory in game studies 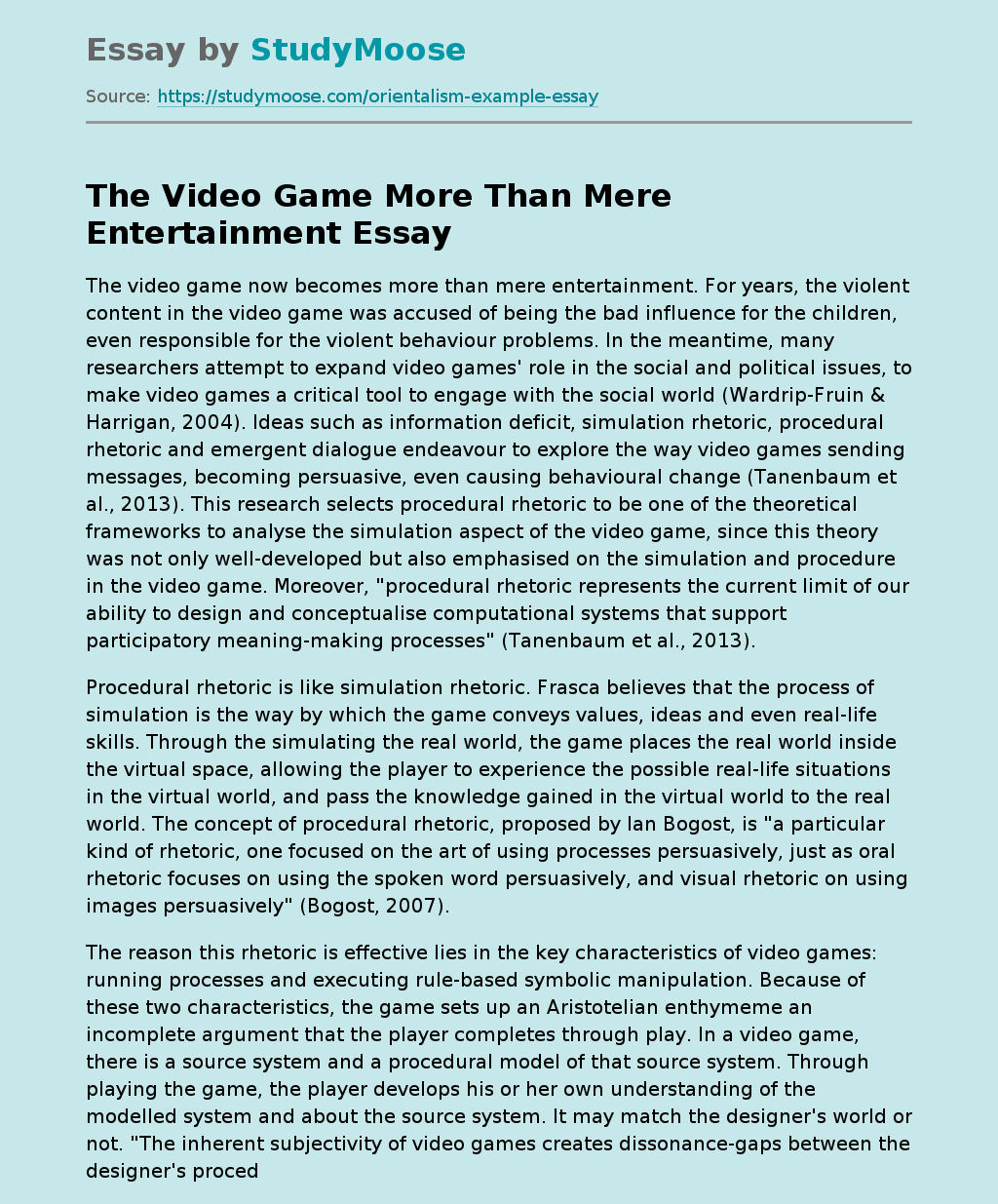